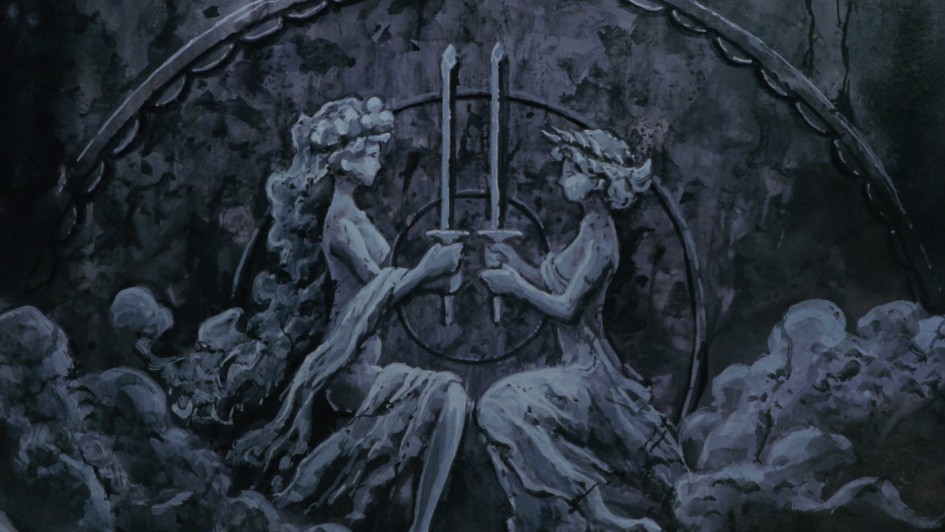 Noir… It is the name of an ancient fate. Two maidens who govern death. The peace of the newly born, their black hands protect. 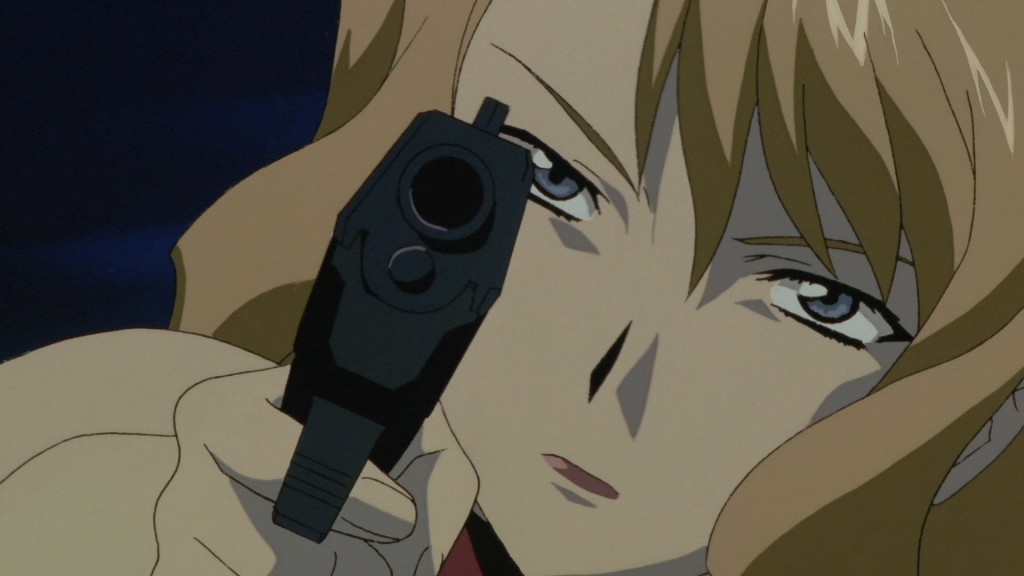 My job is to kill people.

Mireille Bouquet is an assassin for hire in modern-day Paris. As far as her profession permits her to, she is living her life in relative peace, until one day, she receives a strange message from an amnesic Japanese girl named Kirika Yumura. Presenting Mireille with a memento from her childhood, the young contract killer reluctantly agrees to accompany Kirika on her quest to reclaim lost memories and find out who she really is. Taking on the ancient designation of “Noir”, Mireille and Kirika embark upon a violent journey into their past, a path at least one of them might end up regretting. 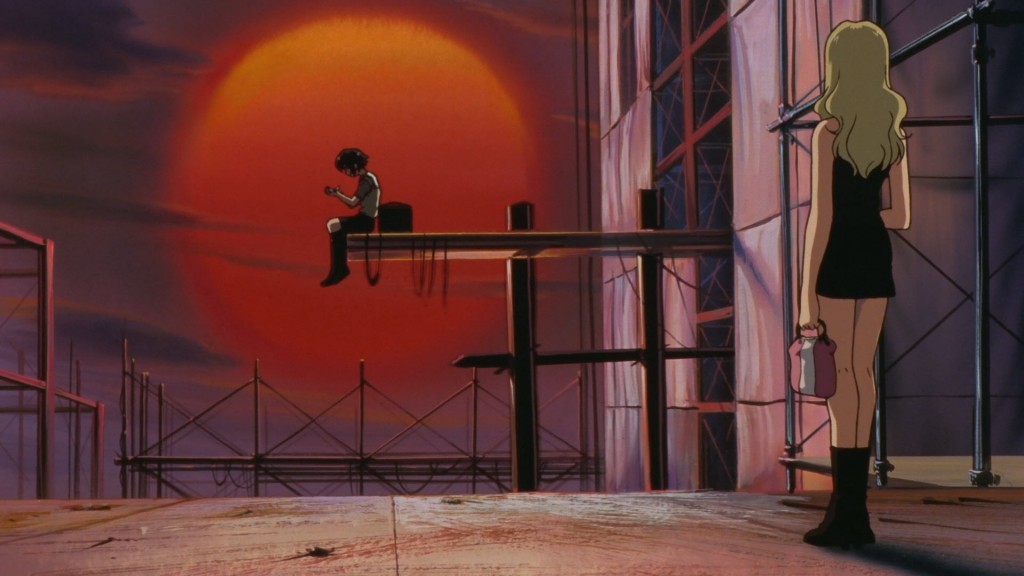 The thread that binds you and me together… The color of that thread is sure to be black.

Shooting their way through various crime syndicates, from the Italian Mafia to the Chinese Triads, Mireille and Kirika perform multiple assassinations while trying to uncover the mystery of Kirika’s existence. On their journey, they will not only have to face corrupt politicians, religious cults and demons from both of their pasts, but eventually find out the true meaning behind “Noir”, a name invoking fear and admiration in the European underworld. 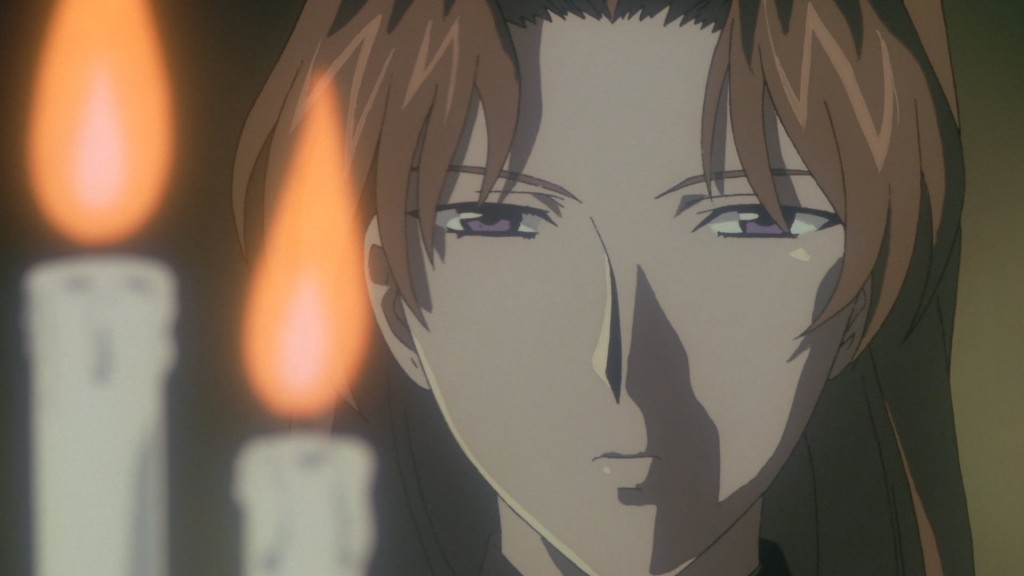 They say Noir is the thousand-year-old darkness of Europe.

Directed by Koichi Mashimo as part of his girls-with-guns trilogy (the two successors being Madlax and El Cazador de la Bruja), Noir‘s 26 episodes originally aired in 2001. Eight years later, Mashimo should return to once again tell the story of amnesic killers in the anime adaptation of Phantom – Requiem for the Phantom, and the parallels are clear to see. Thematically, Noir is firmly rooted in the genre its title hints at, featuring organized crime, mysterious (and mostly tragic) femmes fatales as well as a rather pessimistic outlook on the world. 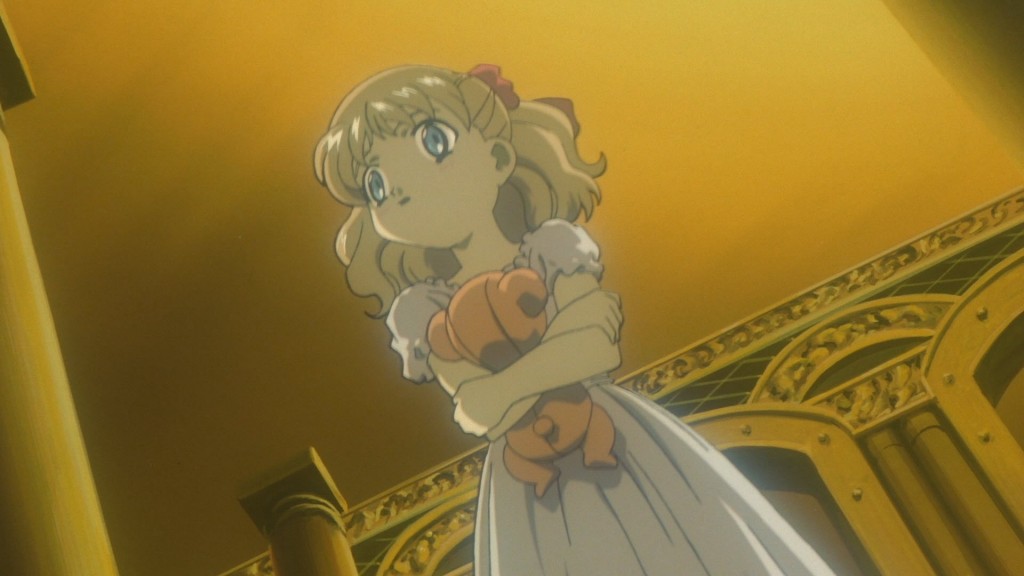 The earth is constantly overflowing with evil and hopelessness.

The series begins with a strong first episode that does a great job at establishing the premise, style and two main characters. After the stellar introduction, the show’s first half suffers from slow pacing, a problem intensified by the recurring, extensive use of flashbacks to scenes from previous episodes and Mireille’s childhood memories. While the latter are very much plot-relevant and slowly expanded upon, the sheer repetitiveness can be grating on the nerves. While flashbacks are also a common staple of film noir, it is obvious the series was intended for weekly consumption rather than binge watching.

What the first cour excels at is using the stories of throwaway side characters to mirror the protagonists’ dilemmas, hinting at and foreshadowing possible future plot points. Taking on assassination assignments and following possible leads, Mireille and Kirika cross paths with several figures of tragic political backgrounds: the German Cold War spy who lost his family to a personal feud, the Czechoslovakian Foreign Legionnaire whose only talent is killing people, the victim and perpetrator of an ethnic cleansing – people defined by tragedy and turmoil, dispersed by wars, who lost both their loved ones and country to the merciless flow of history, a recurring and vital theme for the main characters’ fates. 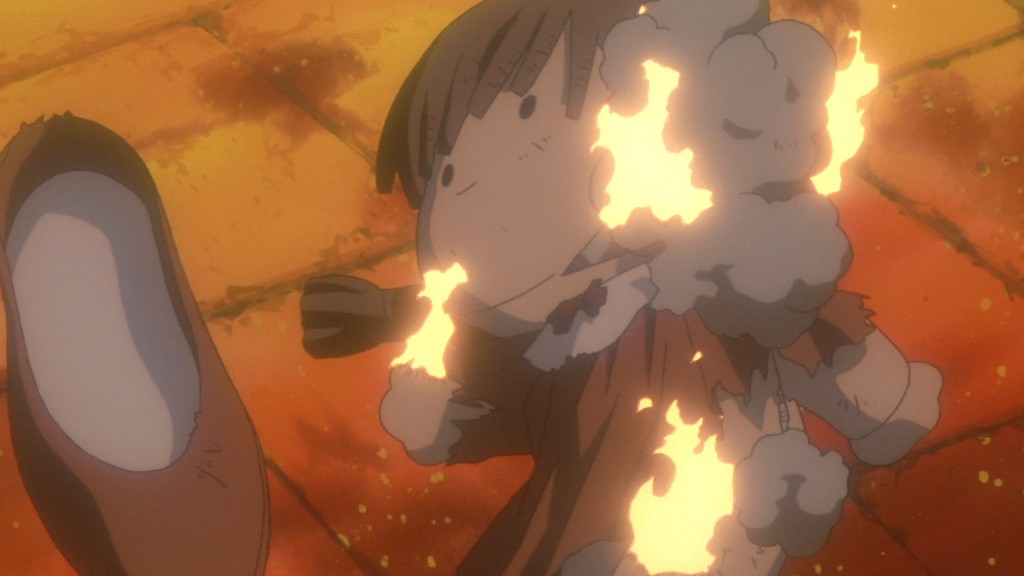 Though the ages may come and go, the world of man does not change. The land overflows with grief and man commits wicked deed upon wicked deed. But Heaven… Heaven maintains its silence.

This not only adds substance to the overall bleakness some of the show’s characters choose (or are forced) to live in, but opens up room for addressing questions such as the justification or futility of revenge, the eternity of sin and the possibility of atonement, all of which will become important towards the story’s finale, making the reveal and consequences of Kirika’s and Mireille’s connection all the more satisfying. 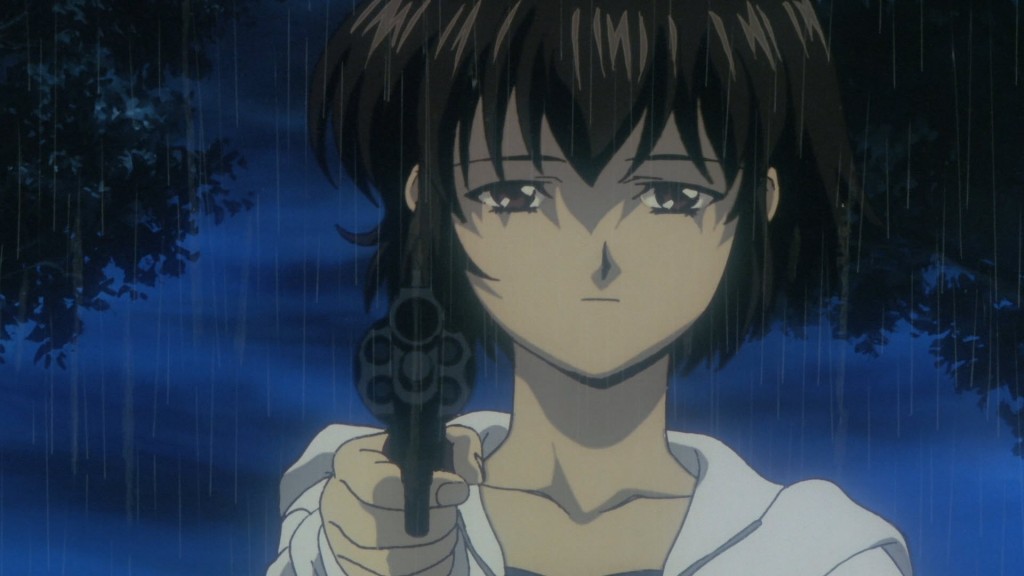 A sinner, once passed away, will never return, but the sins will never vanish and the love will never die… 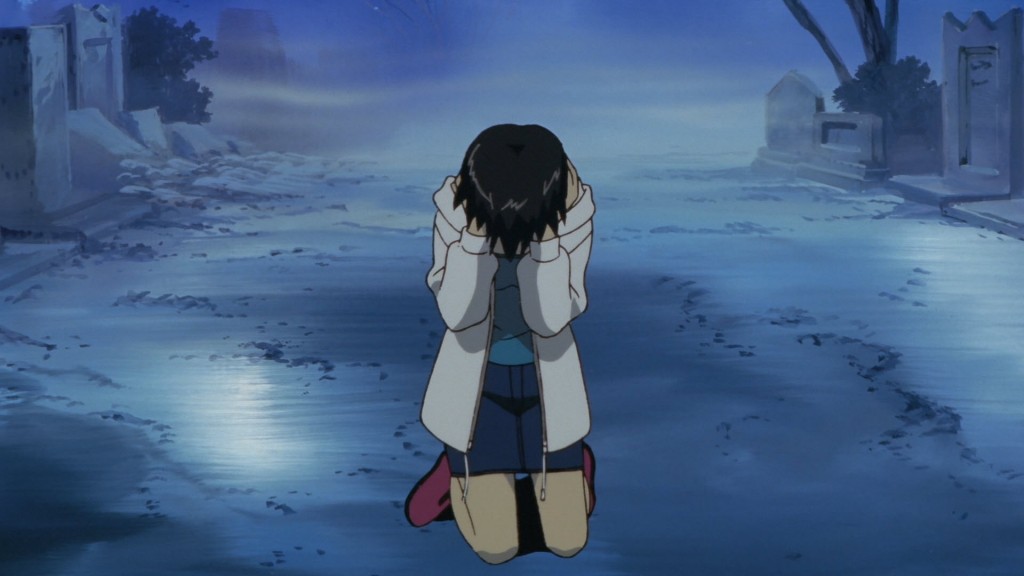 There is no way for me to atone.

In the stronger second cour, the pacing is still elegiac, but the storytelling is more focused and consistent.

Atmospherically, Noir is a very solid show, managing to exude melancholy and cynicism at the same time. Considering the darkness of the themes and plot plus an impressively high body count, the complete lack of blood is one of the more confusing choices studio Bee Train made with the series. Not advocating the use of gratuitous violence, but when it is impossible to tell if a character might be unharmed or mortally wounded, staying immersed in the narrative becomes unnecessarily challenging, especially since the subject matter is bound to exclude younger viewers by default.

Aside from the themes, the series’ style also showcases traditional characteristics of film noir, from dramatic lighting full of strong contrasts and long shadows, with characters often partially obscured by darkness, to the frequent usage of Dutch angles causing visual suspense and uneasiness. 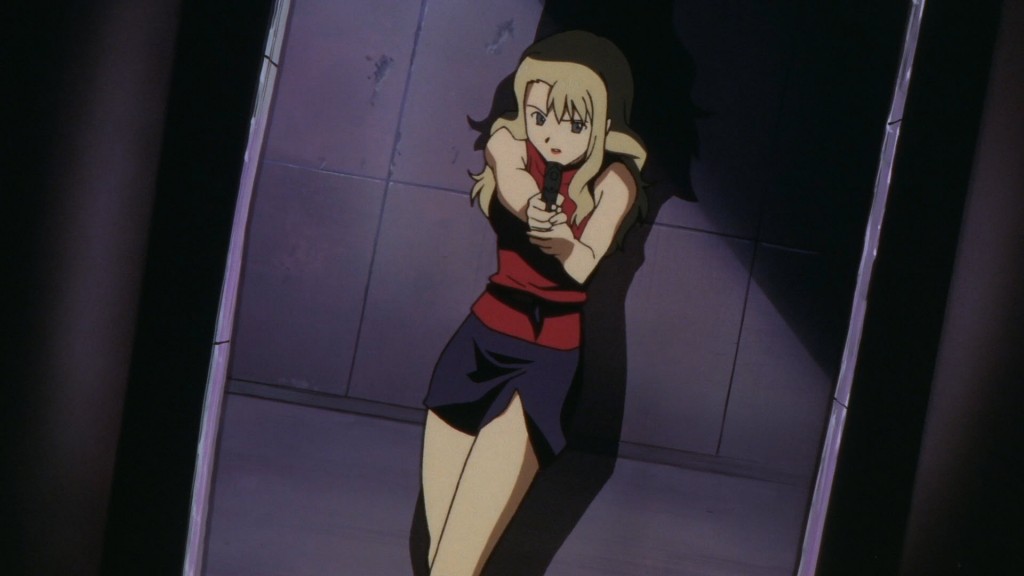 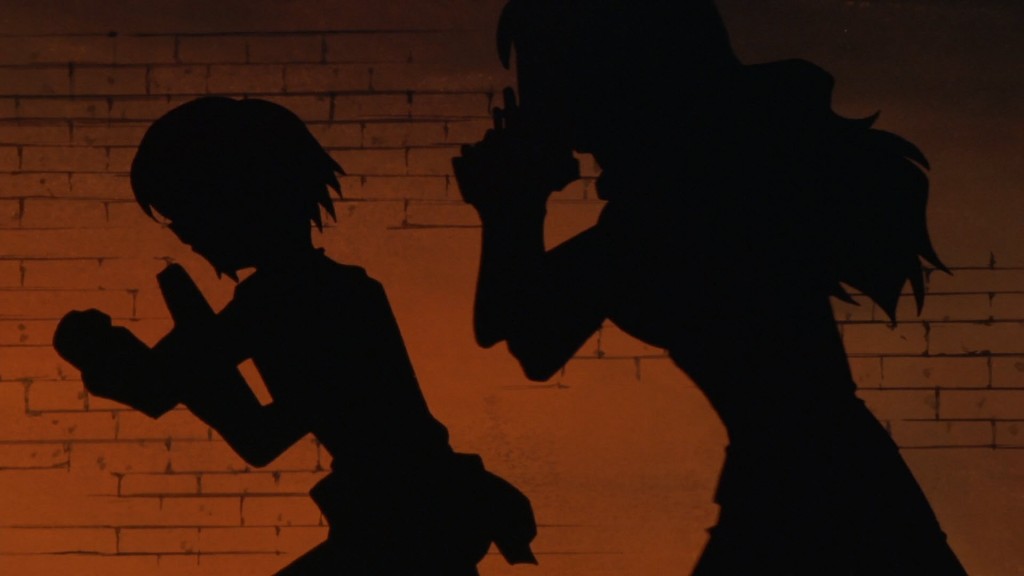 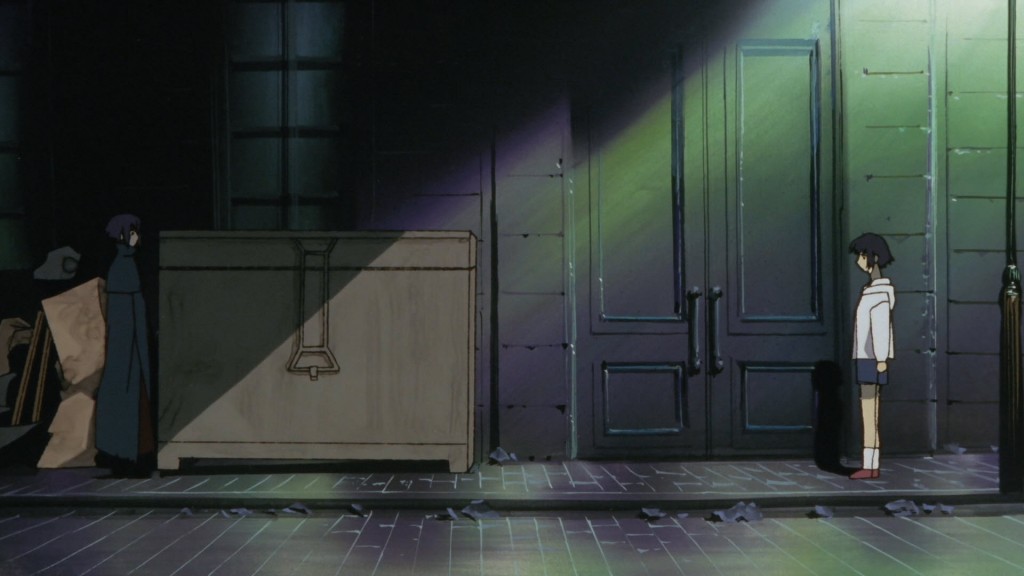 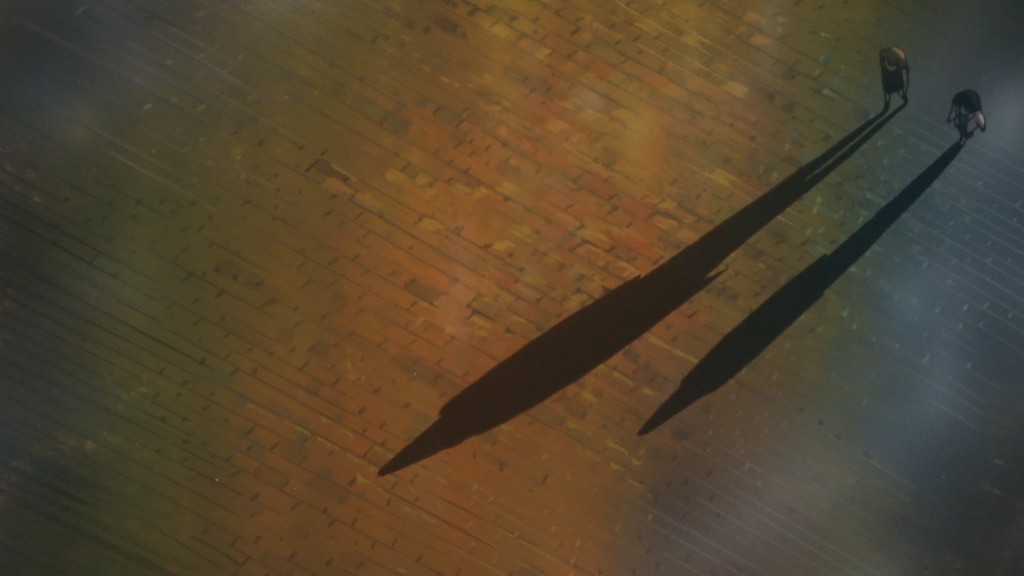 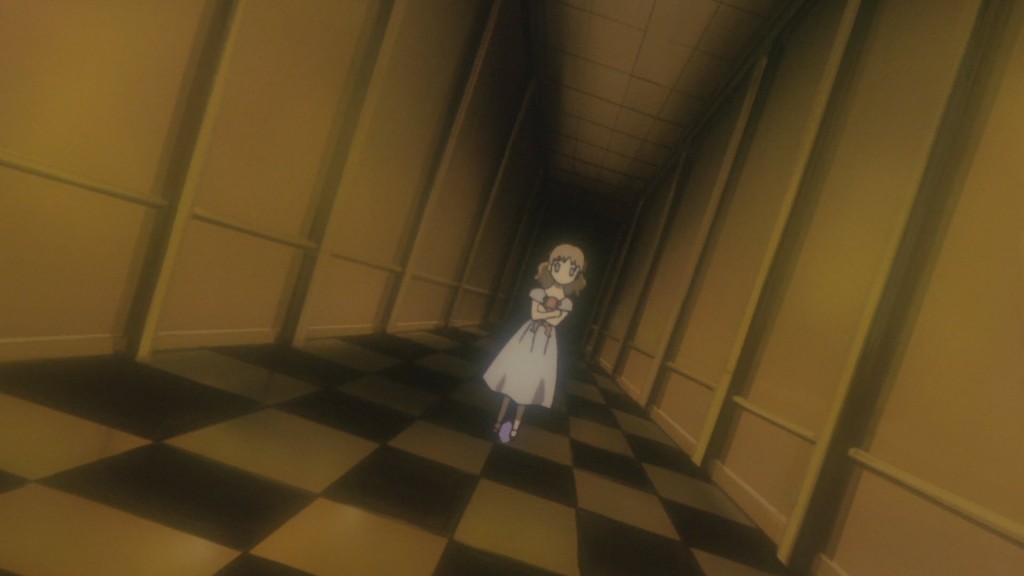 The different locations Mireille and Kirika end up finding themselves in (Japan, Paris, Corsica, Taiwan, a mountain village in the Pyrenees, to only name a few) allow for a seemingly limitless selection of beautifully painted backgrounds, featuring great compositions. The fact that these sceneries are often picturesque and idyllic makes for great contrast with the violence about to take place there. Night scenes are nicely illuminated and especially pretty to look at. 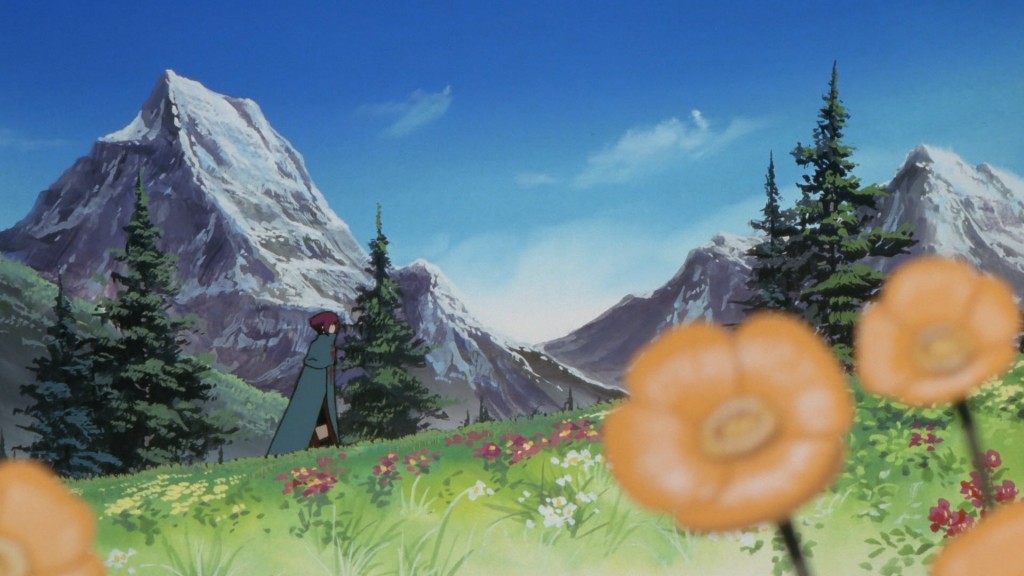 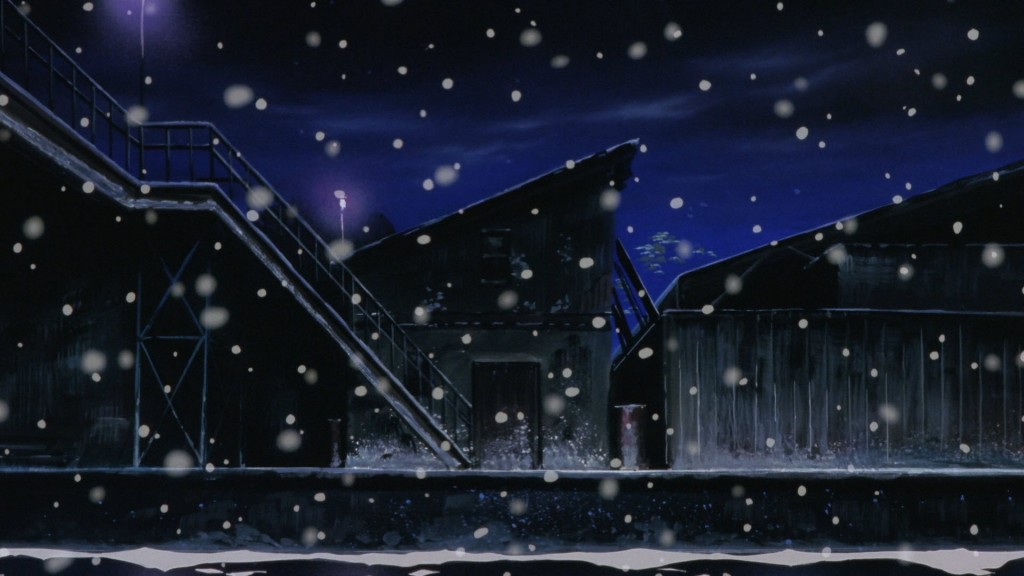 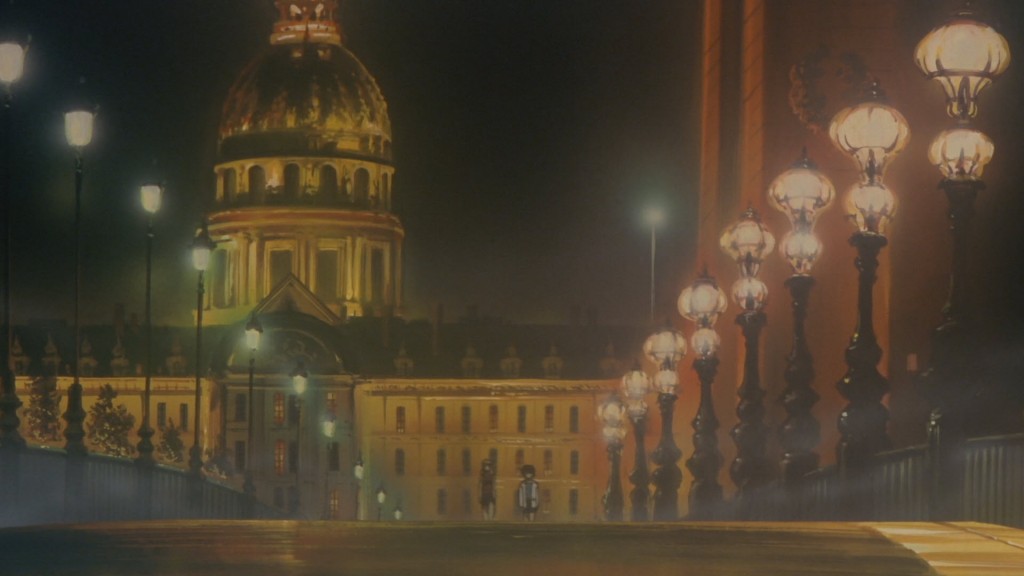 Character designs are pleasant and varied, at least for the more important characters, with distinctive features and believable emotional expressions. 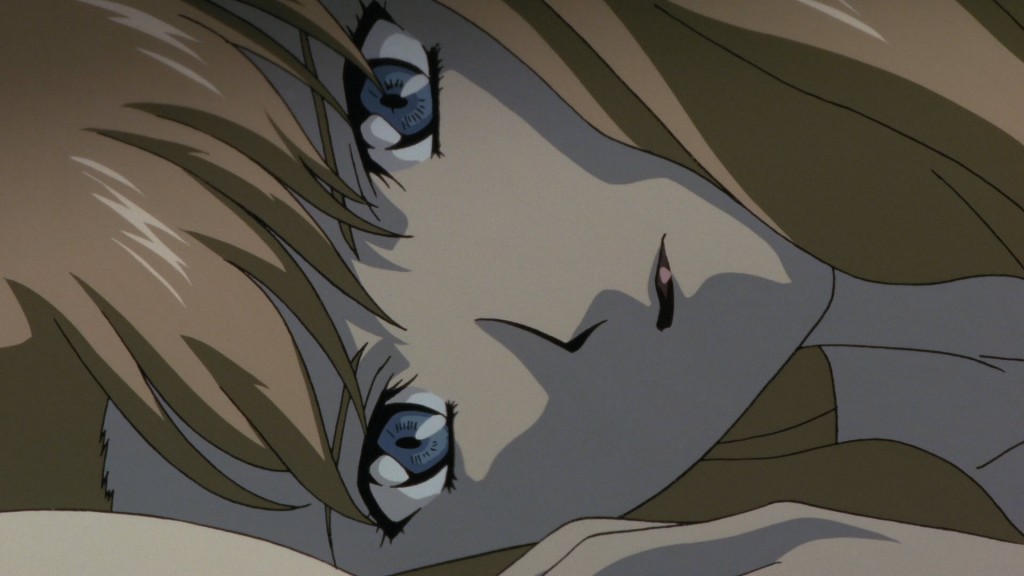 In scenes with low lighting, however, lines can become fuzzy and imprecise, as can be seen in the close-up of Mireille below (at the bottom of her nose and chin). This is likely to be a problem intensified by the Blu-ray’s sharpness and a lot less noticeable in the old DVD release. 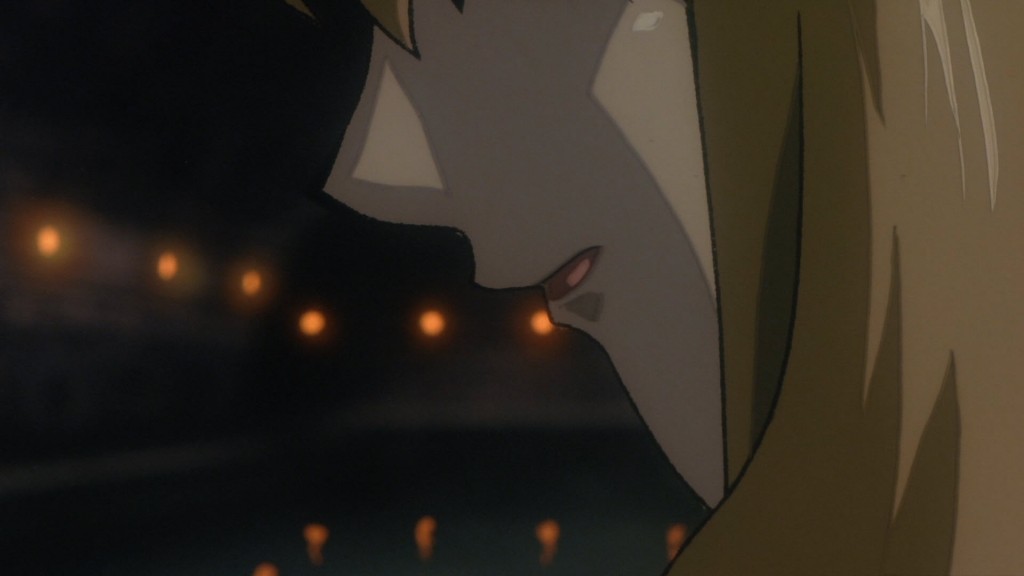 The strong contrasts between light and dark responsible for the wonderfully dramatic atmosphere mentioned above can also have negative side effects whenever someone is standing under a tree in broad daylight, casting shadows so harsh the characters suddenly look like they are suffering from an incurable skin disease. 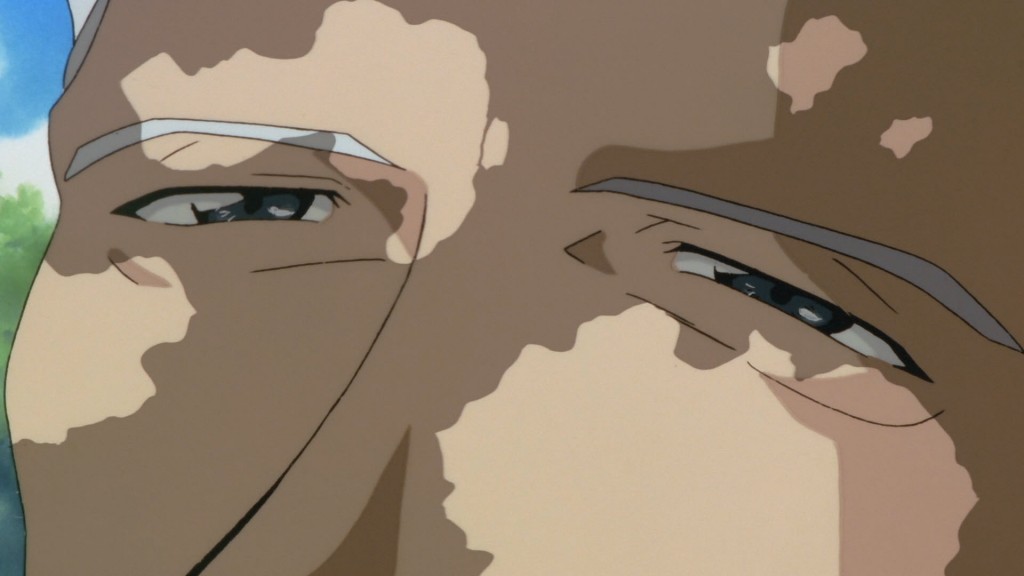 Missing kneecaps (or any other visible joints) in long and medium shots are another minor visual issue Mireille in her mini skirt is suffering from in particular, leading to some awkward running and walking sequences when seen from afar.

Clearly wearing the attire and embodying the sexy femme fatale, the fact that neither she nor Kirika (or their relationship) gets overly sexualized is a welcome relief, especially within the girls-with-guns genre. Not counting the shootouts themselves, fan service in Noir is wonderfully absent. 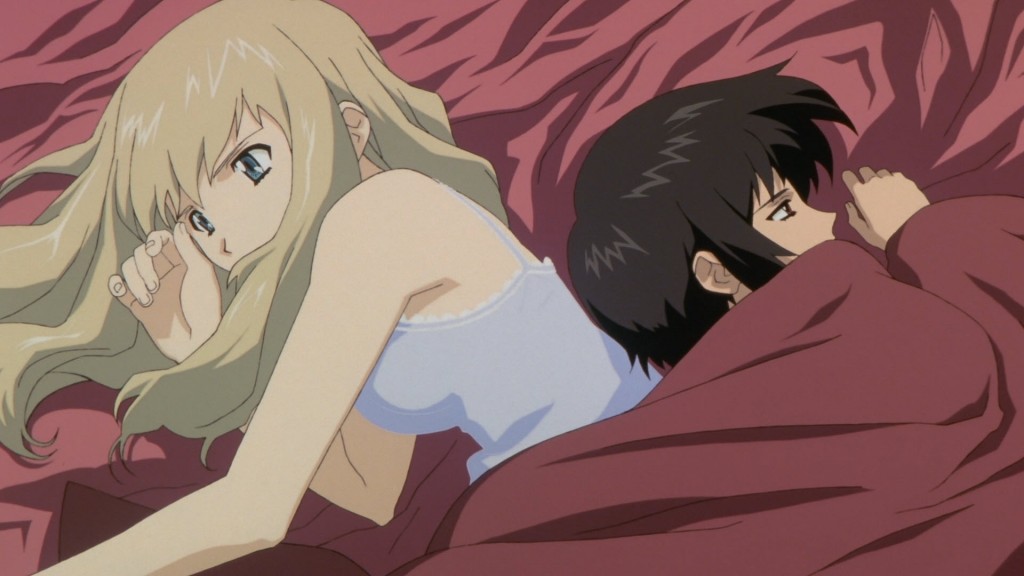 The action and assassination scenes, while effectively animated and well choreographed, can get repetitive over time, involving little strategic planning and mostly playing out in the same way, with Kirika proving herself as the perfect weapon again and again. Witnessing dozens of nameless male henchmen die from incompetence when facing the much more able female assassins, the emotional involvement and sympathy for the “victims” in these scenes are likely to stay rather limited. 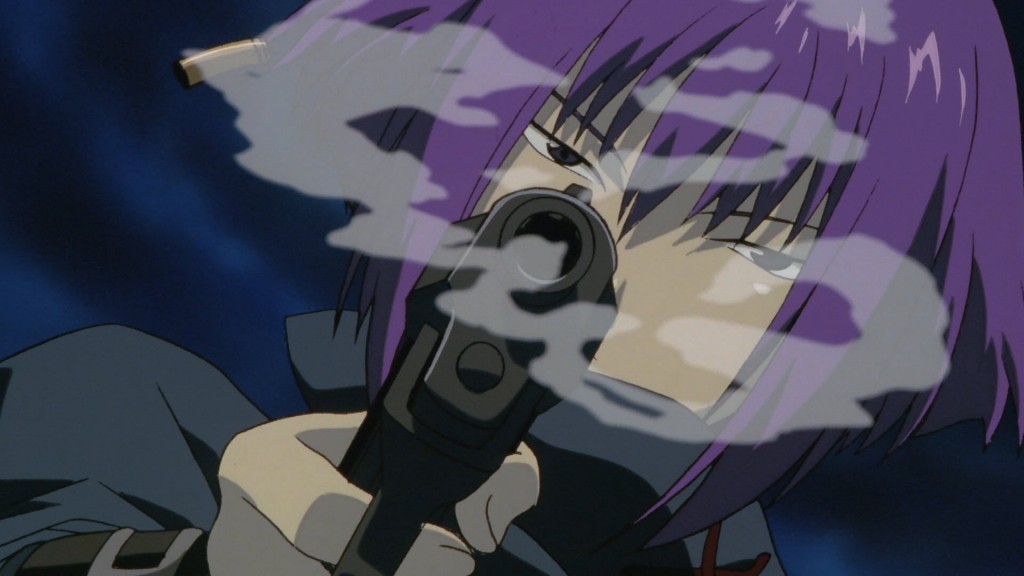 Fan service is not the only front where Noir keeps things subdued and tasteful. Completely lacking in explanatory monologues and actively avoiding any portions of dialogue longer than necessary, the show turns out to be a surprisingly quiet character piece. Important scenes can play out in almost complete silence, making the voice actors’ work challenging. Both the Japanese and English cast do well at putting as much restricted emotion as possible into their performances.

Within such a quiet series, the music becomes all the more important in conveying what the characters themselves cannot express. The eclectic score by the ever-brilliant Yuki Kajiura (The Garden of Sinners, Fate/Zero, Puella Magi Madoka Magica) manages to blend ominous chanting with techno beats, juxtaposing relaxed French coffeehouse pieces and powerful ballads without breaking a sweat. Among several standout tracks, the hauntingly beautiful pocket watch “Mélodie” takes the crown. 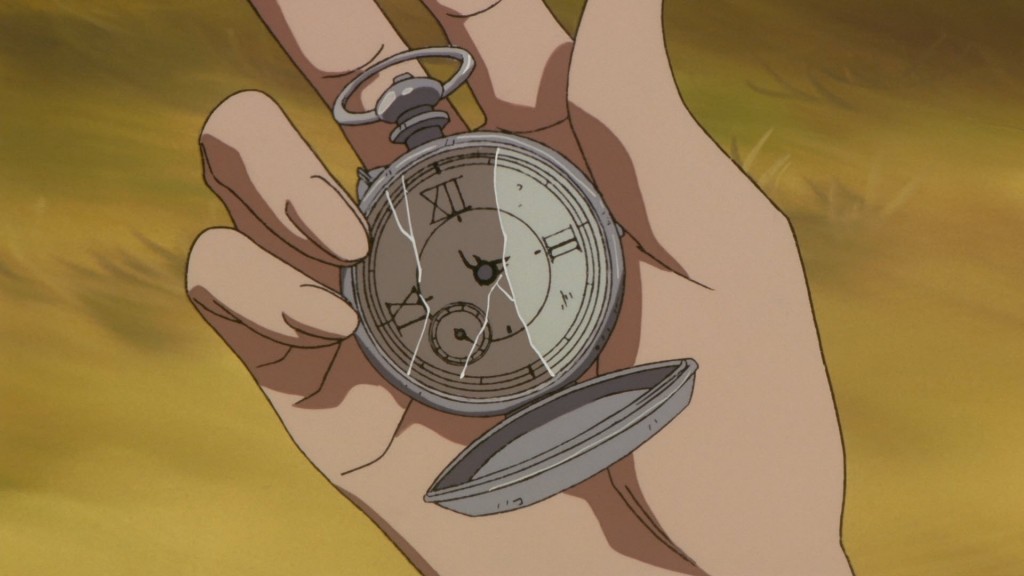 I will open the door to the past. With my own hands, and without fail.

The specials on the Blu-ray release include the original Japanese trailers and music videos for the main characters, as well as textless versions of the opening and ending. Two episodes come with commentaries by the English voice actresses and producer, while the accompanying DVD contains interviews with both the Japanese and American cast talking about their acting experience and approach to the characters. The definite highlight is a sock-puppet version of Noir, voiced by the original English actresses who clearly had a blast recording the short segment, as did the sound engineer.

While not perfect in every aspect, Noir succeeds as an atmospherically rich show with an interesting premise and satisfying conclusion, providing just the right amount of closure a subdued series like this is able to offer. Before reaching the end of its characters’ journey, the story manages to touch upon big themes such as the wish to be “normal” and the question of what such a state might entail, if it even exists. The truth of the world might be bad, but human interaction, as faint and fragile as it may be, is never truly futile. 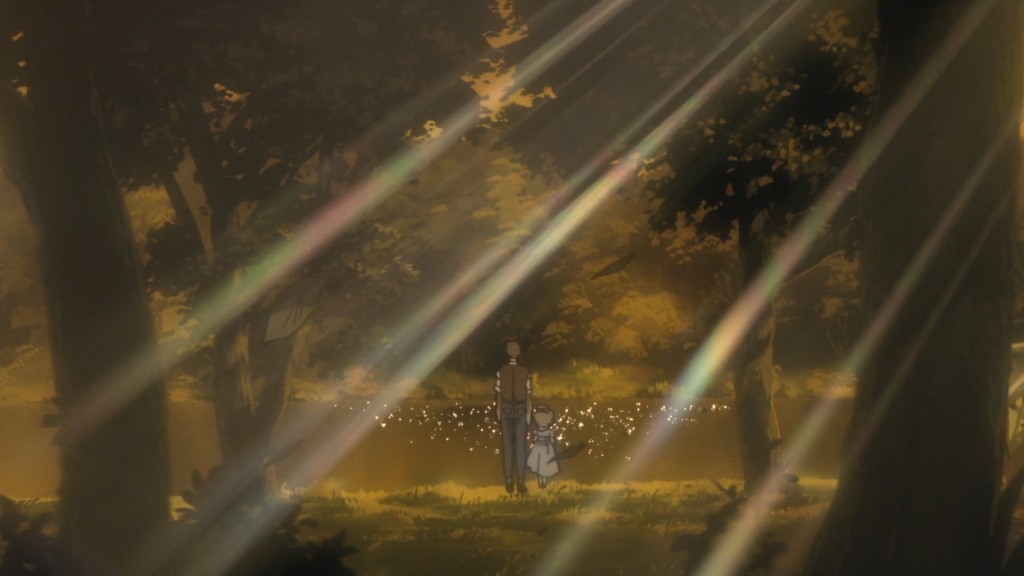 In the end, the world we live in is in darkness. – That’s why we seek the light.

This is the slightly extended version of a review written for Anime Herald in December, 2015.