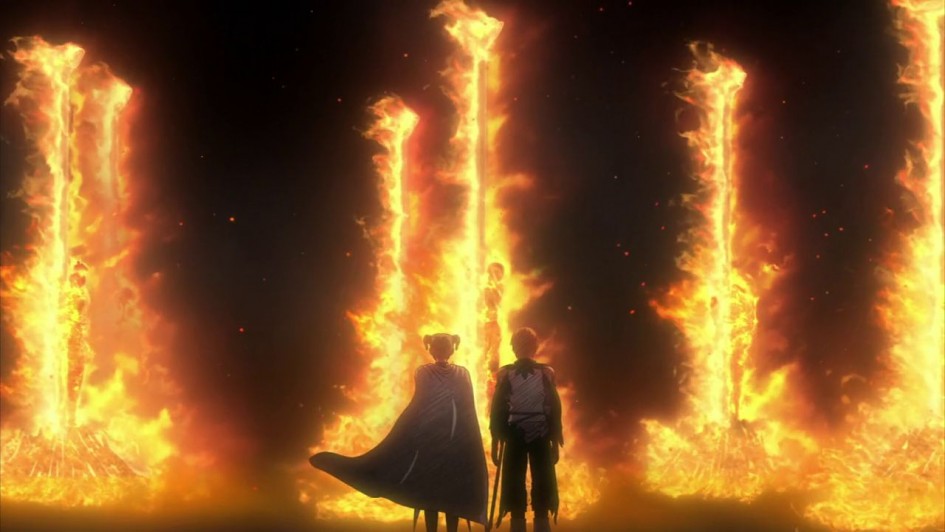 Griffith’s return to the physical world provided a powerful cliffhanger ending to Berserk 2016, and the question of what his reborn self would be like loomed heavily over the new season. In-universe, people dream of the Hawk of Light to deliver them from darkness, but Griffith has more pressing matters to attend to before indulging in any savior business: proving to himself that the Eclipse got rid of that troublesome humanity of his once and for all. And so he seeks out Guts to do just that.

Winter sure is depressing in Berserk, always hurting people in so many ways beyond the physical cold. The “reunion” of the surviving members of the Band of the Hawk on the Hill of Swords makes for a powerful scene, from Guts and Zodd’s fight in the graveyard to Rickert helplessly watching, frightened and confused as both fighters pick up the grave markers he made to commemorate his lost comrades, one of whom just returned from the dead only to be revealed as the one responsible for it all. It’s heartbreaking to think that Rickert’s shock and disbelief are nothing compared to the horrors he will have to endure after learning the truth.

It was winter when Guts beat Griffith and left the Hawks, and it’s winter now when, after all his demon slaying, Guts can’t even touch Griffith anymore. But something does get to Griffith, just when he reassures himself that he’s finally free. While rescuing Casca from being buried alive might be explained away as the demon child’s influence, Griffith’s lack of total indifference in the fight between his new and former swordsmen is most interesting. I’m enthralled by the idea that even sacrificing everything and everyone in the Eclipse might not have been enough for Griffith to rid himself from every last bit of his human feelings, which might yet again get in the way of pursuing his “dream”. When he rebukes Guts for ever expecting anything else from him, his words could just as well be interpreted as blame for causing his fall: You should have known. You of all people. The fact that this struggle is still personal on both sides makes this one of my favorite moments in the manga. So how does this scene play out in the adaptation?