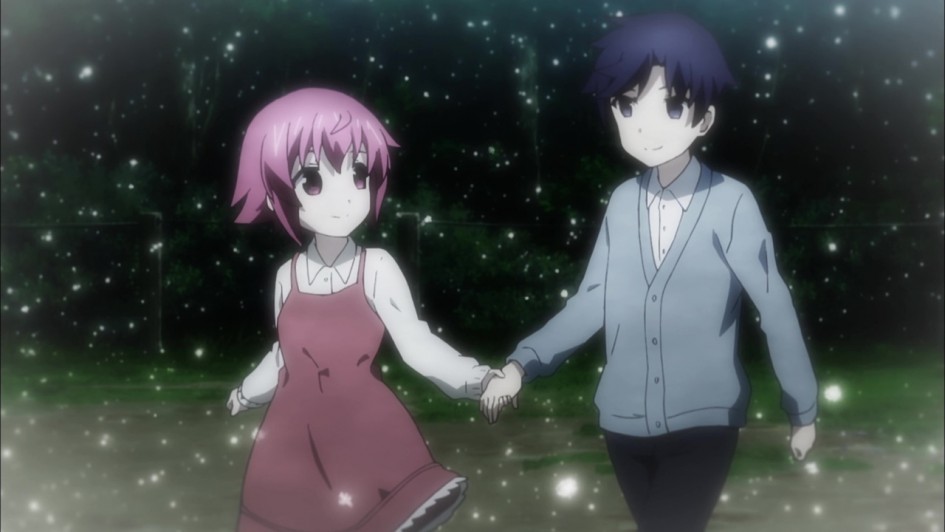 I could just as well copy and paste my review from last week and change the rating, since everything that didn’t come together then has fallen apart completely now. Before we get to the really bad stuff, let’s look at Taku’s imaginary memories with Onoe, which weren’t too shabby despite the almost comically severe neglect by his parents. Poor Taku ended up projecting his loneliness onto Onoe who had it even worse in his mind, with parents who called her “abnormal” reflecting his own fears about the reason why no one cared about him. Comforting her comforted him, so Onoe served the purpose of reassuring his existence – it was the two of them against the whole world. Their story could have been told better, but it’s still legitimately sad.

Their idolization of Chaos;Head’s Takumi also feels very plausible – like them, he’s an outsider, but contrary to them, he managed to have the last laugh when the whole world was against him. Holding on to a feeling of superiority over those who don’t accept him as a mechanism of self-defense, Takuru wants to be Takumi, and the newspaper club’s obsession with the NewGen murders suddenly gains depth beyond its adolescent fascination with urban legends and creepy mysteries. All of this is much more interesting than anything that happens in the present, where we still don’t leave Freesia’s, and every plot point and emotion is narrated instead of actually happening once again. Even the flashback’s few timid attempts at communicating anything visually (Onoe’s unsettling close-up introduction, her lack of a reflection in the mirror) disappear to make room for more static monologuing.

Check out my full review of Chaos;Child, episode 10 over at ANN.