Fate/Zero, or the troublesome Nature of “I want” 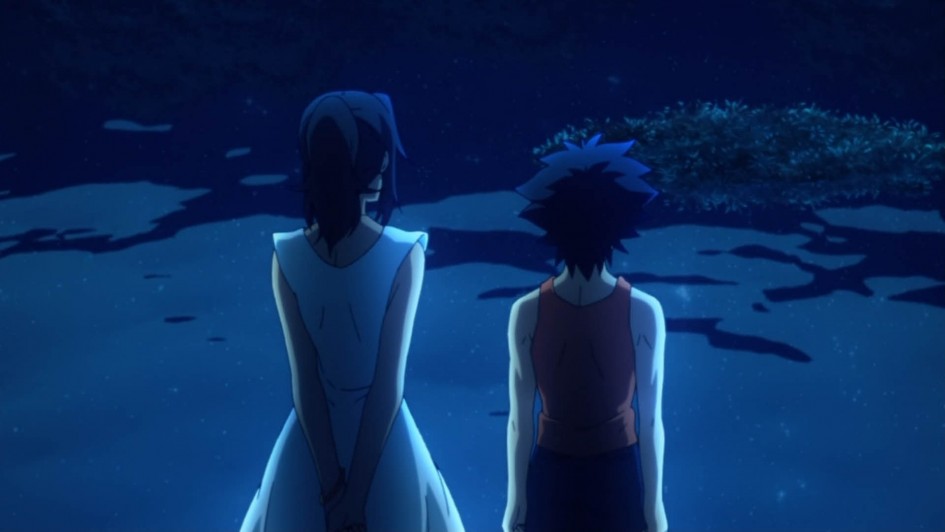 What kind of adult do you want to be when you grow up?

Giving your characters something to want is one of the most fundamental rules of storytelling. Compared to other scenarios, Fate/Zero‘s setting makes it comparatively easy to put this concept to use. After all, it tells the story of 14 characters engaged in a holy war over a magic wish-granting device. Having something to wish for is the basic prerequisite for participating in the war and playing a part in the story. Therefore, the series is very much a textbook example of how to tackle the all-important concept of “I want” and the ways to let the story unfold from there.

Fate/Zero is the story of 13 characters who know what they want, and of one who doesn’t.

In a story featuring such a huge cast, it’s obvious each character needs to have a very clear-cut motivation and objective distinct enough from the others’ to secure our continued investment. We have characters fighting for old-fashioned values like honor, pride or personal glory. Others want to prove themselves. One is just bored, which, fueled by a sudden burst of power, is always a dangerous thing. We also get characters signing on for greater goals like wanting to save the world.

I want to be a hero of justice.

Finally, we have tragic notions of regret, wishing to undo the mistakes of the past, and characters seeking punishment, both for others and themselves. In short, it’s already a pretty interesting mix for the battle royal about to unfold.

Written by Gen Urobuchi, however, this is only the outlet. Wanting to be a hero is fine and dandy. But what consequences do grand wishes like these entail? As it turns out, believing we know what we want, realizing what we actually want and eventually getting it can be very different things.

You cannot wish for something you yourself don’t know.

Urobuchi, being a fan of the human condition, sets out to explore this difference by artfully dissecting his characters’ wishes and beating them round the head with what too often turn out to be sad excuses. No-one will escape this process by claiming a tragic childhood or the titular powers of fate. Because no wish is ever as simple and pure as wanting to save the girl, asking for nothing in return.

I don’t want anyone else to die chasing fantasies.

And as we explore the raw and honest nature of these wishes, we see where self-deceit can lead us. It’s not always pretty, but it’s always fascinating, because Urobuchi doesn’t shy away from exposing the consequences of even the most honorable motivations one could possibly have.

Taking responsibility for one’s actions is the most essential criterion for humanity.

And humanity is a rather fascinating species.

As a prequel, Fate/Zero is firmly established as a tragedy right from the get-go. Everyone familiar with the original story will know this war is never about who will win and fulfill their wishes. Instead, we get a detailed study of all the lovely ways humans indulge in when lying to themselves.

Human nature is conflict. To reject that is to reject humanity itself.

Over the course of the story, the characters will be forced to look at their own reflection and confront the true nature of their wishes. Some grow through this assessment, some end up destroying themselves to avoid facing the truth. Others will be destroyed by their vanity and blindness to the motivations of the people around them. This leads to some powerful cases of dramatic irony, when the characters being stabbed in the back are often the ones most proud and vocal of their honor and loyalty, symptomatic of the repressed, unconscious awareness of what they fear to be lacking.

I wished only to defend my honor. To fight in noble battle with you. You have crushed… my sole remaining wish… Let my blood taint your dreams! Let the wish bring disaster.

The most beautiful irony, however, lies undoubtedly in the nature of the wish-granting device itself, which, as it turns out, is literally built upon the destruction of the dreams of humanity’s greatest heroes. Deconstruction rarely gets more straightforward.

It is the dream that all warriors hold as their deaths approach. A sad, exalted dream.

Amidst these ruins of broken dreams, the story’s last remaining blank slate character is eventually inspired enough to discover and embrace what his own wish might be. With everyone now clear on motive, something else leaps to the eye. Just as the ancient heroes of Fate/Zero are summoned into classes representing their individual traits and strengths in battle, the story’s human characters also show a tragic tendency for casting themselves into archetypes corresponding to what they want to see themselves as: the brooding hero, the young revolutionary, the heroic sacrifice.

A king is a martyr to their ideals.

Even fictional characters seem to be inclined to compartmentalization, which, just like in real life, leads to dangerous simplifications. Incapable of realizing the honest nature of their own desires, they inevitably reach a point where they become unable to fulfill these self-imposed roles.

All dreams, by definition, end when the dreamer wakes.

When that happens, things take a dramatic turn for the worse, as can be expected from a tragedy.

It is the moment when hope turns to despair.

At this point into the story, things look pretty grim and desperate. But despite his notorious reputation for killing off his characters rather mercilessly, Urobuchi is a secret, but devoted admirer of every facet human nature has to offer.

Even though he knows he will lose them, he cannot stop loving others.

Which is why, within all its bleakness and verbose declarations of cynicism, Fate/Zero also gets to boast one of the most heroic death scenes in recent memory. Wholeheartedly committed, it finds itself cheering on and celebrating all those silly concepts of honor and heroism it’s so keen on tearing apart when being worn by characters less honest about themselves. And that’s the crucial point. Being honest with yourself and about what you want. Choosing the path of brutal honesty, we will witness every possible outcome of self-imposed heroism: damnation and death, but also inspiration and salvation.

As king, it is my duty to inspire others to dream. I can make this world real… because it still exists within our hearts.

In the end, what we are left with are questions. What does it truly mean to be a hero? Should we be judged by our wishes or their consequences? Do good intentions relieve us of guilt and responsibility? Can the end ever truly justify the means when those means end up being just as horrible as what you originally set out to fight against?

How many of the few can be sacrificed for the needs of the many before the borders between good and evil start to blur too much to stay recognizable? Are we bound to fail, no matter how hard we try? Is there no hope? To which the story’s protagonist firmly replies:

There is no hope on a battlefield. But humanity has never recognized this truth. For that, we have to blame the dazzling hero, who, in every era, has blinded the people with his legendary deeds, and kept them from seeing the evil of bloodshed.

Is the dream of true heroism really just that, a “sad, exalted dream”?

Urobuchi himself seems to take a different stance. While he has no patience with would-be heroes and shows little mercy in calling them out on their nonsense, he is always ready to close on a note of hope.

Glory lies beyond the horizon. It can never be reached, and that is why you strive for it.

Because, even tough we are prone to failure and unlikely to achieve what we originally thought we wanted, there is still meaning to our actions as long as we are honest about them and try to persevere.

After all, “the true value of a man is not determined by his possession, supposed or real, of truth, but rather by his sincere exertion to get to the truth”. (Gotthold Ephraim Lessing) 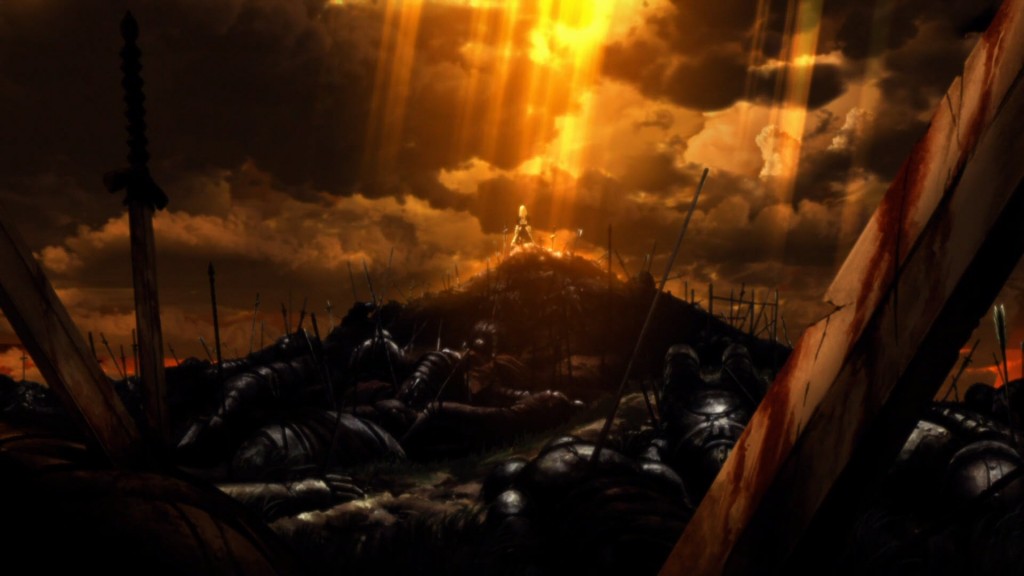 Since you couldn’t be one, I’ll be a hero instead.

This essay deliberately left the series’ plot as vague as possible for the sake of avoiding spoilers and addressing the possibilities of the eternally important “what do I want” question in storytelling.

If you want to read more about the strong notion of hope in Urobuchi’s work, check out Nick Creamer’s excellent essay Gen Urobuchi and the Human Spirit.

And if you want to know why I like his work so much, read more about Urobuchi’s take on the selfless sacrifice trope.