For this winter season, I thought I’d try my hand at my first episodic reviews of a currently airing series. As time constraints will only allow me to cover one show, I decided on Showa Genroku Rakugo Shinju, which seems to best match my personal preferences. Also, it airs on Fridays, making write-ups over the weekend a whole lot easier to commit to. 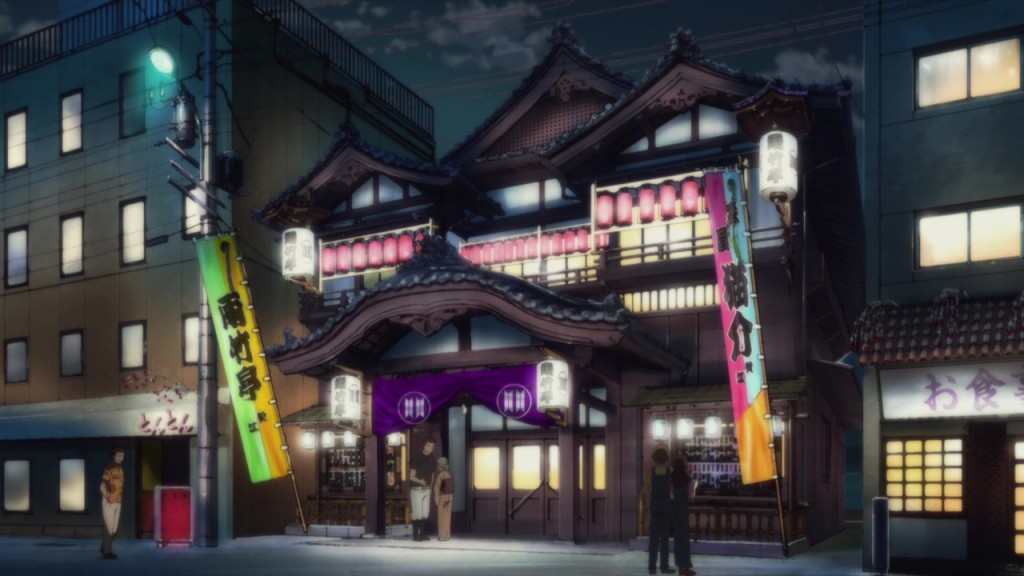 Showa Genroku Rakugo Shinju tells the story of ex-convict Kyoji, who, after being released from prison in the 1970s, visits rakugo master Yakumo. Deeply impressed by the latter’s performance in prison, Kyoji is determined to become the rakugo-ka’s new apprentice and learn the art of traditional comedic storytelling. When Kyoji ambushes Yakumo into teaching him at the theater (“the place where you go when you have nowhere else to go”), Yakumo takes him in on a whim, much to the surprise of everyone around him. After all, Yakumo had never accepted an apprentice before. But there is something about Kyoji which reminds both Yakumo and his foster-daughter, Konatsu, of the late rakugo master Sukeroku. While Konatsu still mourns her father’s tragic death, the mysterious circumstances of Sukeroku’s passing let her blame Yakumo, who, in turn, is haunted by Sukeroku’s memory for reasons yet unknown to us. Torn between the admiration for his teacher and the influence of the late master he so eerily resembles, Kyoji, now called Yotaro (“the fool”), sets out to discover his own style of rakugo and, possibly, uncover the mystery of Sukeroku’s death. 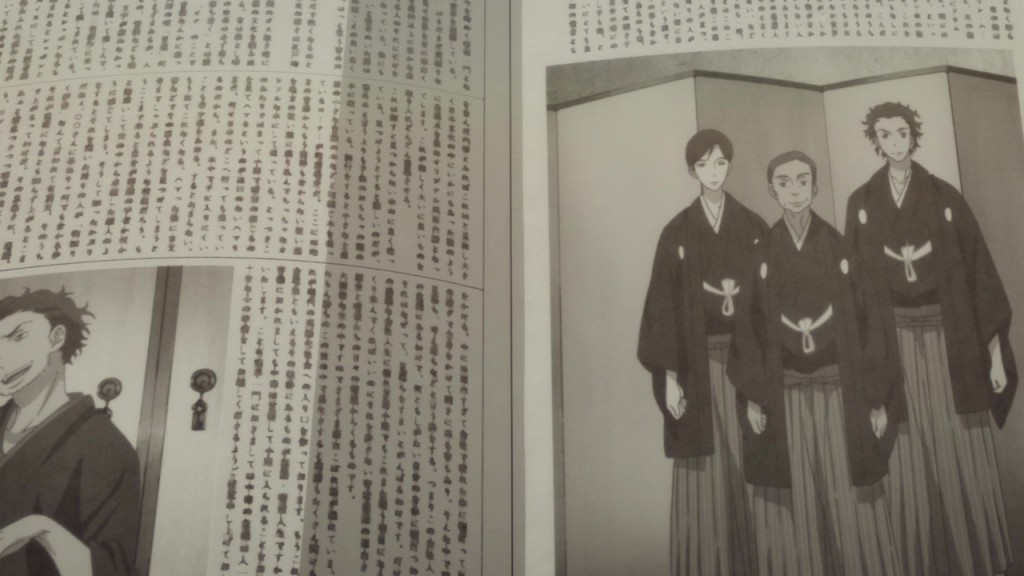 Based on an acclaimed josei manga, Rakugo started its run on January 8 with a technically and narratively impressive double-length premiere. 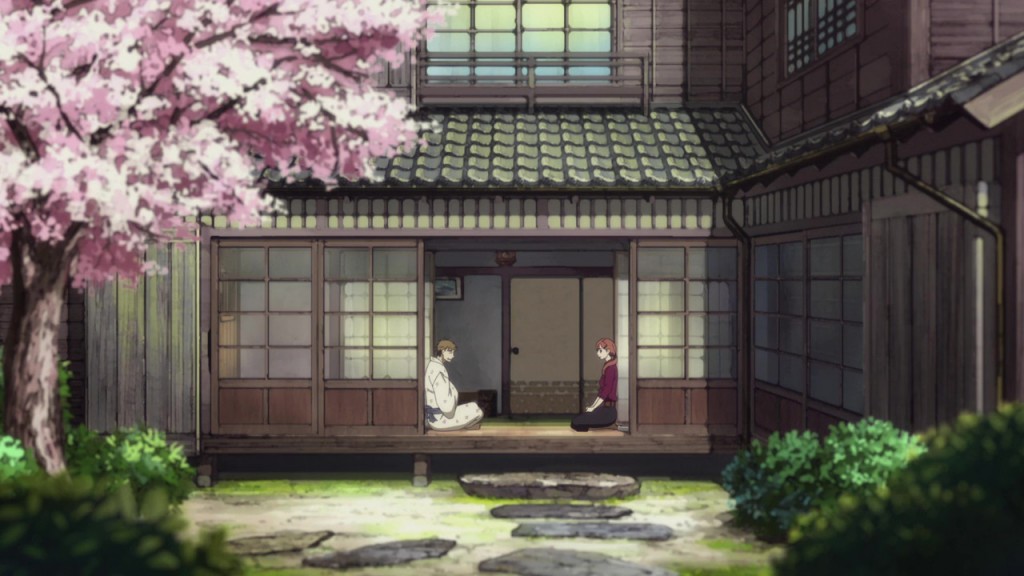 After its peak in the Meiji era, the popularity of traditional sit-down comedy has continually declined. Rakugo is not exactly mainstream entertainment in 1970s Japan. Centering on the lone storyteller who relates his story in form of dialogues while using only minimal props, the rakugo-ka has to rely on his facial expressions to engage the audience. And on his voice, using pitch, tone and manner of speech to make each character unique, switching between them by a slight turn of the head without ever leaving the kneeling seiza position. 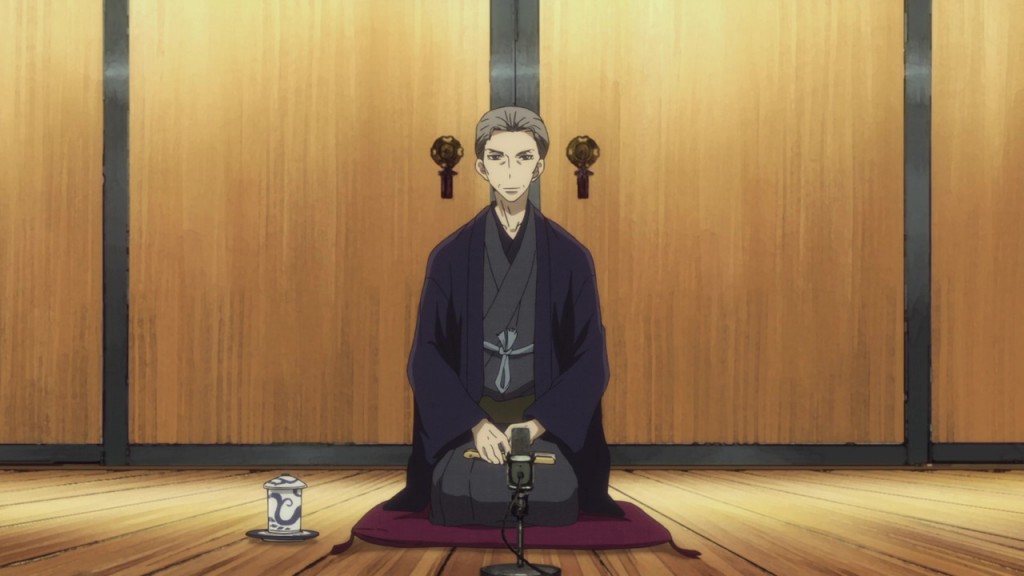 Even for viewers generally familiar with or interested in classical Japanese entertainment, rakugo is bound to feel somewhat alien and old-fashioned. What could be a show with a rather steep barrier of entry becomes easily accessible through the passion of its characters: Yakumo, perfectionist and self-appointed guardian of a slowly dying art, Yotaro, who makes up for his lack of experience with sheer enthusiasm, and Konatsu, who curses being born as a woman, unable to follow in her father’s footsteps in what was then a men’s domain. 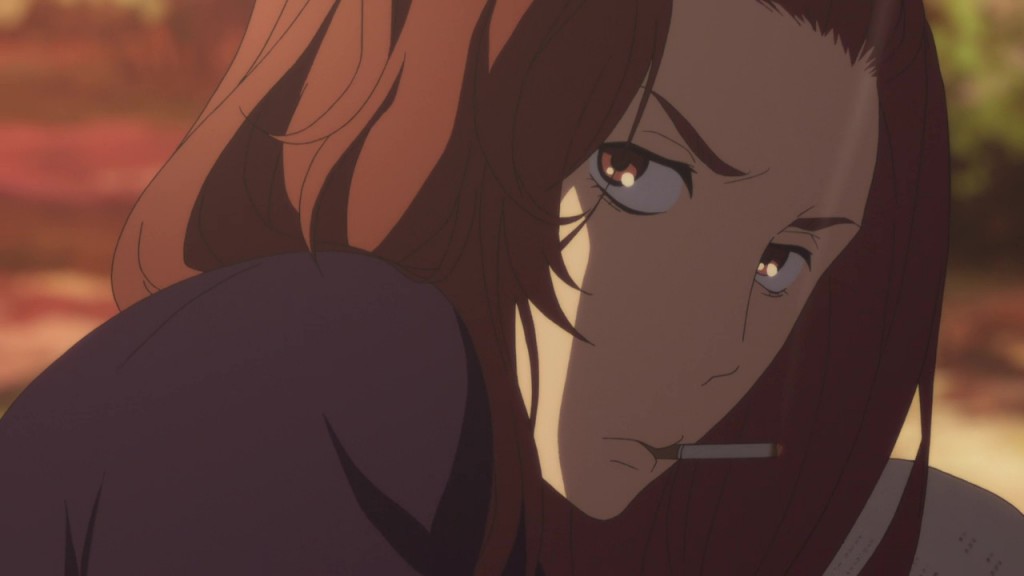 When on-stage rakugo performances take up a significant amount of an episode’s runtime, casting actors who are able to switch between and convincingly impersonate different characters becomes imperative. Luckily, Rakugo‘s main cast is nothing short of brilliant. Tomokazu Seki (Fate/Zero‘s Gilgamesh, Psycho-Pass‘ Kogami, Full Metal Panic!’s Sousuke) gives a spectacular performance as Yotaro, once again proving his incredible versatility. His Yotaro knows no restraint, radiating a childlike innocence despite his criminal background. 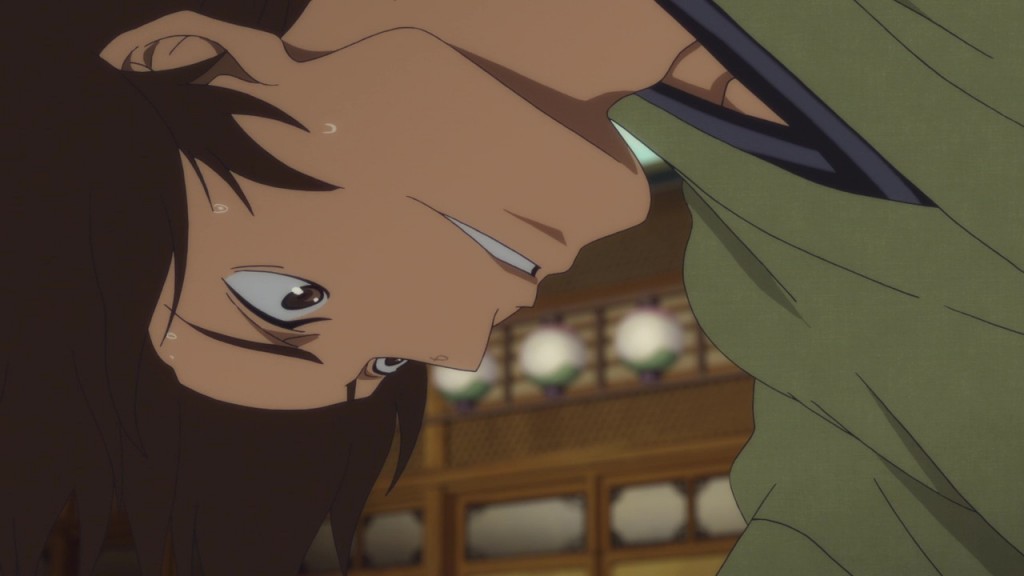 Akira Ishida (Neon Genesis Evangelion‘s Kaworu, Berserk‘s Judou, Fate/Zero‘s Ryunousuke) sounds much older than usual in the role of Yakumo. Finding just the right balance between carefully exercised self-control, intellect, perfectionism and jadedness, he effortlessly switches between roles, blowing the audience away on stage and in front of the screen. 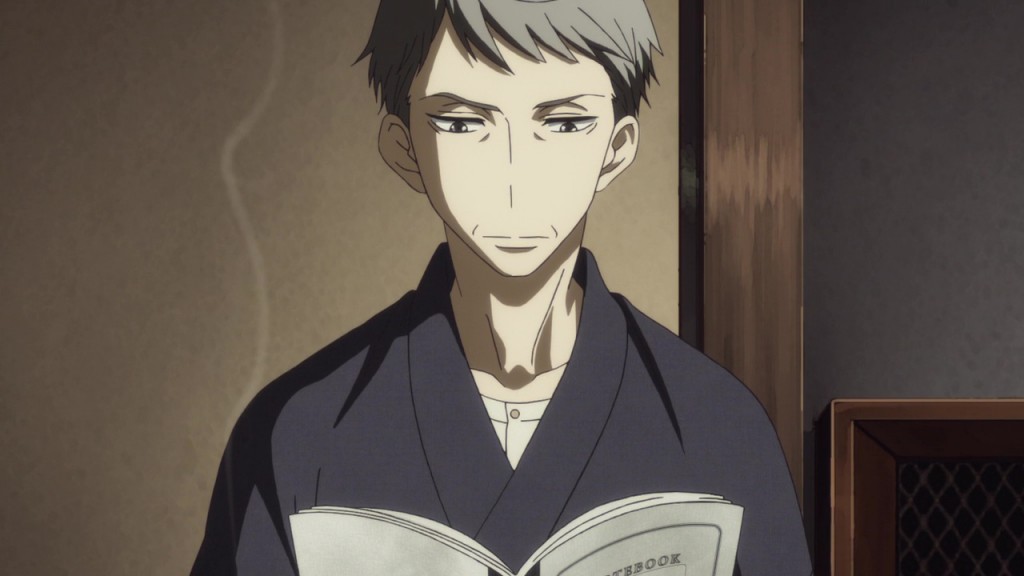 Watching Rakugo, I found myself wishing my Japanese was better in order to fully appreciate the subtle shifts in tone, speech and register. Both Seki’s and Ishida’s performance, just as Yu Kobayashi’s as Konatsu, feel truly alive. 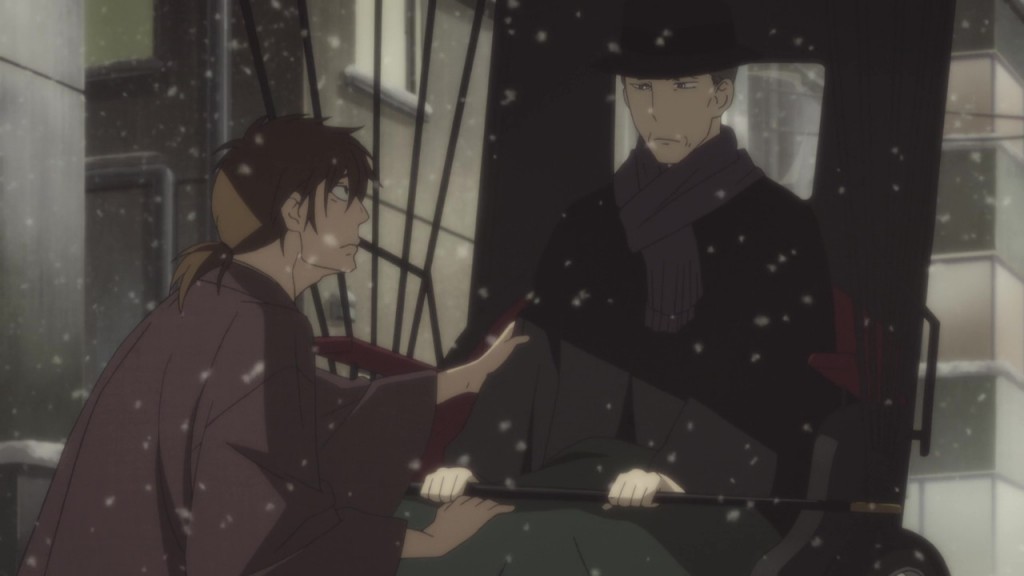 More praise is due on the audio side, with a captivating score by young jazz pianist Kana Shibue, who blends traditional Japanese instruments (Yakumo is introduced via Hyoshigi, used to announce the beginning of a kabuki play) with jazzy percussion and brass. 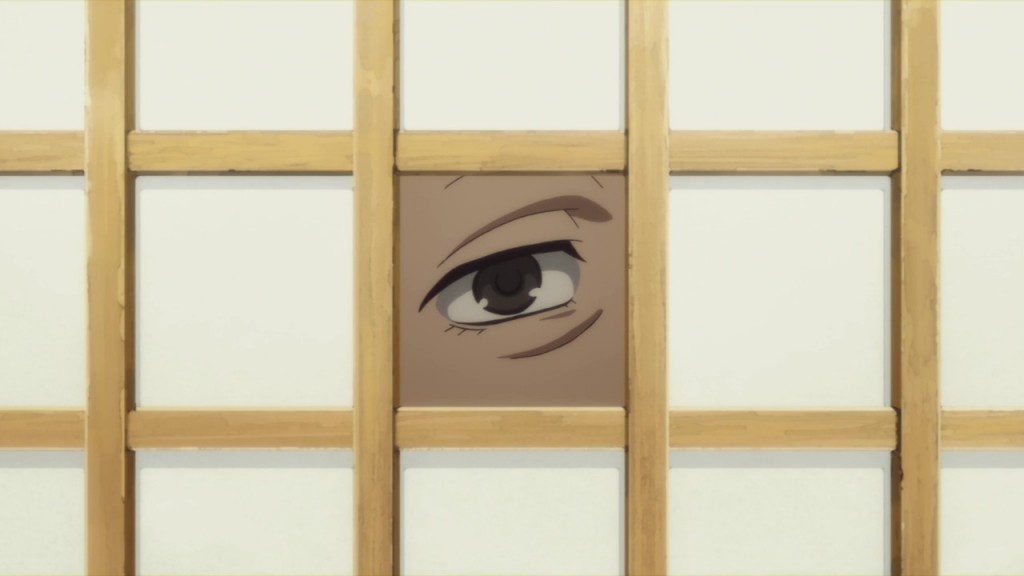 The actors’ superb performances are matched by wonderfully distinctive, expressive character designs, animated so vividly that relating to them and their passion becomes effortless even if you have never heard of this strange, alien thing called rakugo. 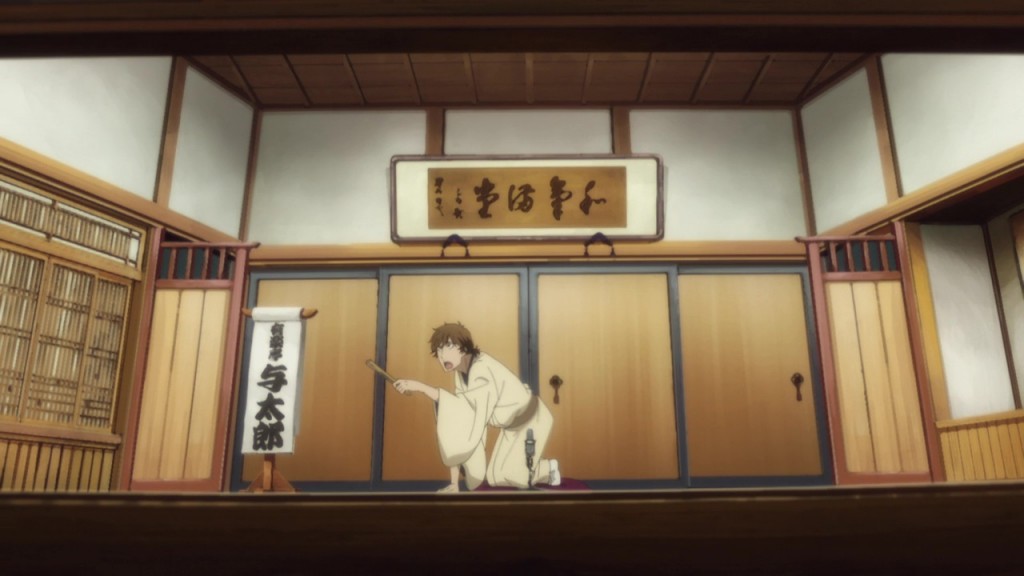 Turning a 10-minute on-stage monologue into a cinematic experience requires artful direction. Shinichi Omata’s team combines terrific editing with beautiful framing, invoking the illusion of conversations in the rakugo performances and transforming every scene into an intimate character study. All those technical merits never get so flashy that they would distract from the emotion of a scene. When Konatsu silently mouths the words of Yotaro’s story along with his performance, her emotional involvement testifies to both her own passion for rakugo and (unconscious) support of him. 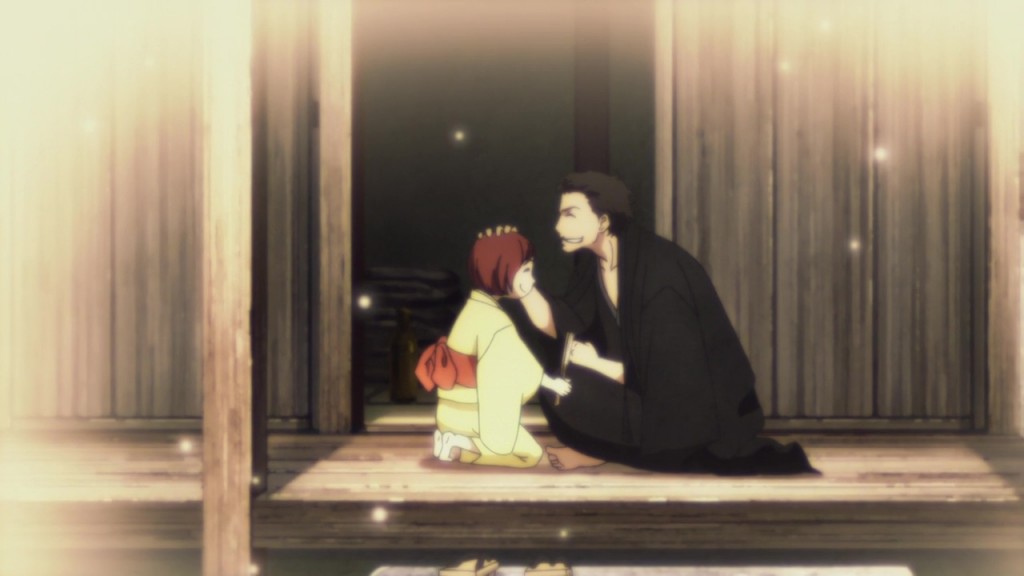 Celebrating the beauty of a dying art form, Rakugo doesn’t have its characters perform just any routine, but uses the stories to reflect the characters’ own personalities and regrets, and – possibly – their futures. 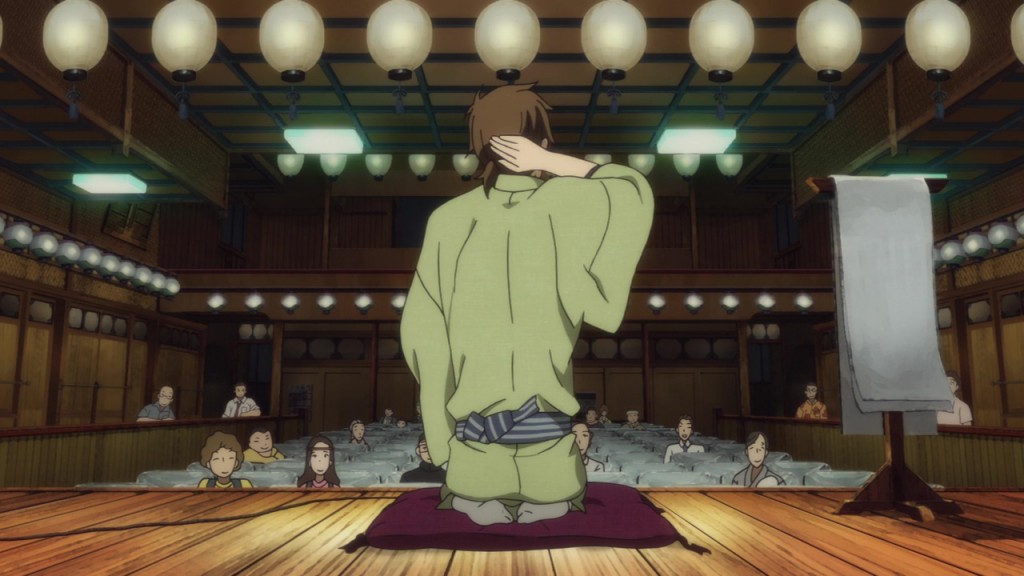 Yotaro’s rakugo is the story of an opportunistic thief trying to impress his boss. Yakumo’s rakugo tells the story of a traveler lost in a snow storm. Seeking shelter, he is poisoned by a woman he used to know. He survives, unwittingly causing the death of her husband in his place. While thick snow is falling outside the theater, we begin to see the images he is conjuring up intercut with his performance. 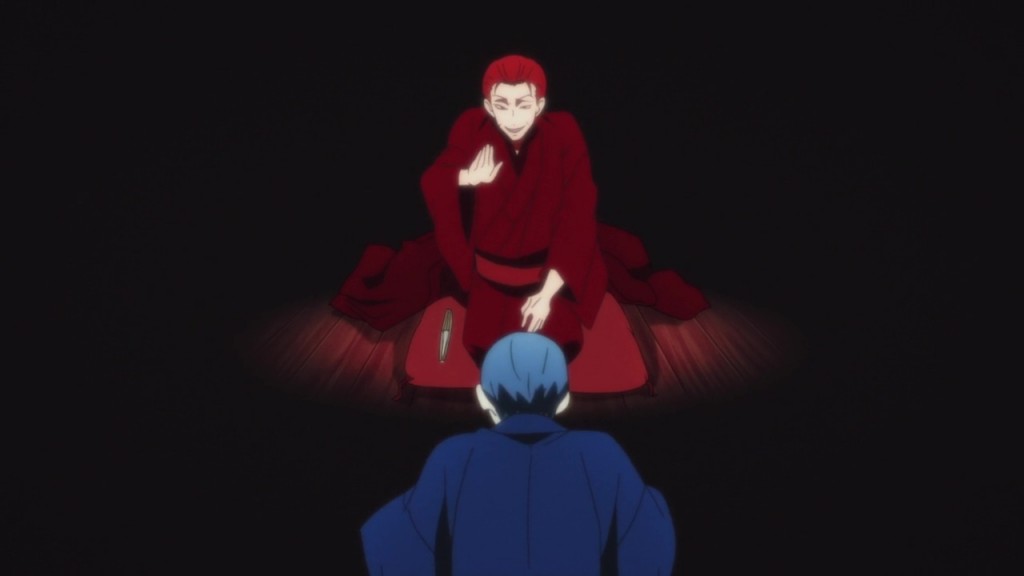 This isn’t done to spice up an otherwise uncinematic scene, but to put us in the minds of his audience, captivated by his vivid storytelling. Fiction and reality begin to blur further when Yakumo sees Sukeroku’s ghost while leaving Yotaro behind in the snow-clad streets on his way home. 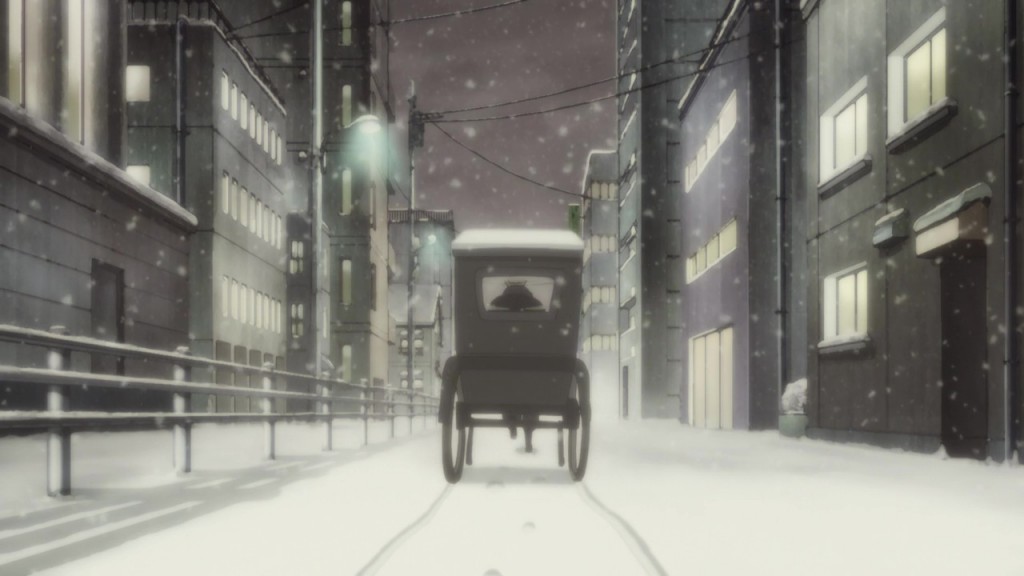 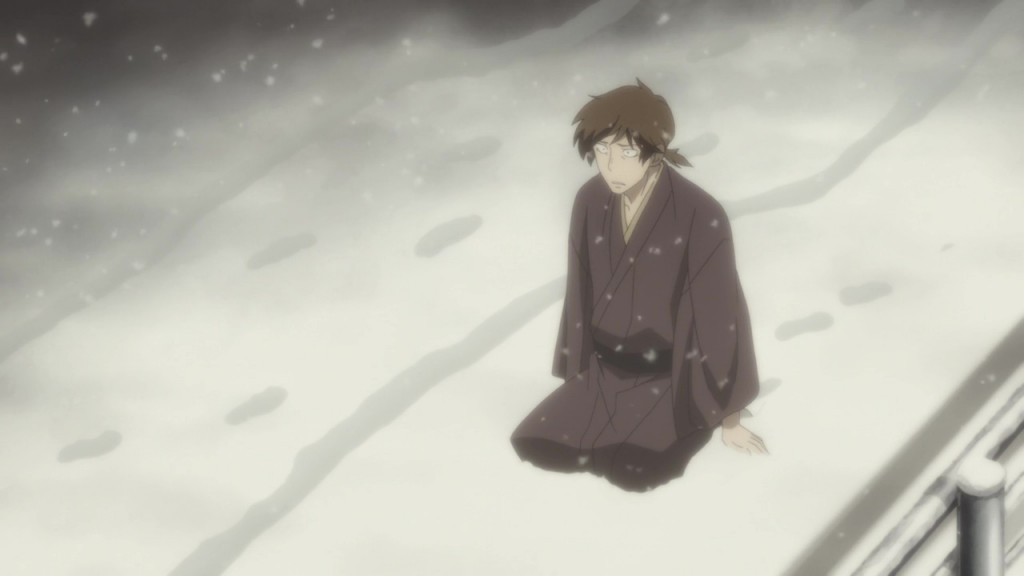 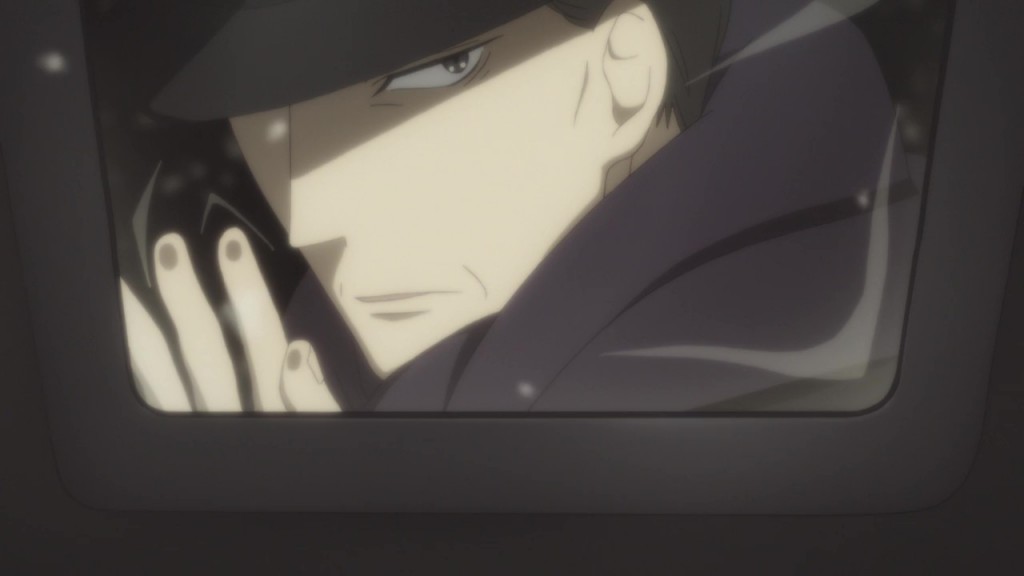 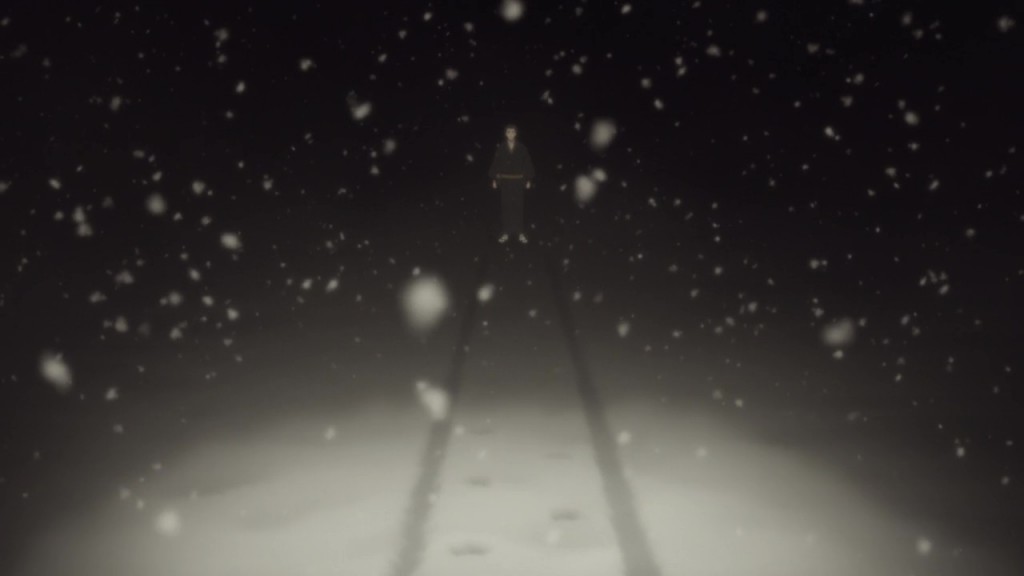 Finally – and possibly most foreboding – there’s the story which prompted Yotaro to seek out Yakumo and become his apprentice, the story of a worthless punk who, one day, met a shinigami. After said death god makes him a rich man, he has to find out it was all a scam, and that he has been robbed of his life without noticing. Everyone in prison was scared, except for Yotaro, who loved the story and wanted to tell it himself. 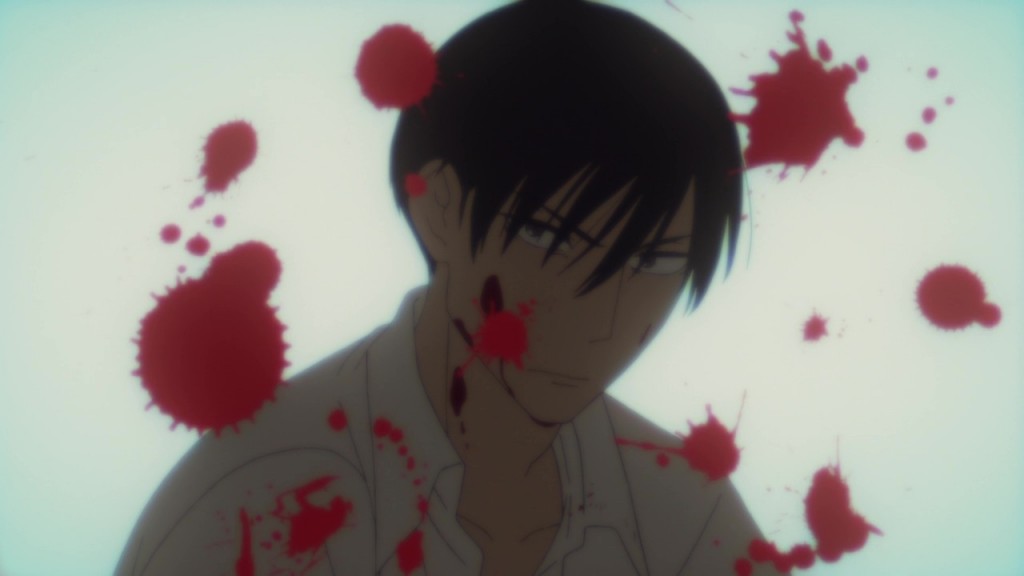 When Yakumo makes Yotaro promise to help him ensure the survival of rakugo by taking the place of his late friend he originally made the same promise with, the stage is set for a series which will, hopefully, continue to be as intriguing as its first episode. With a title translating to “Showa and Genroku Era Lover’s Suicide through Rakugo”, I’m eager to find out how Yakumo and Sukeroku made their promise, why Sukeroku died, and if Yakumo can lay his ghost and his own demons to rest. 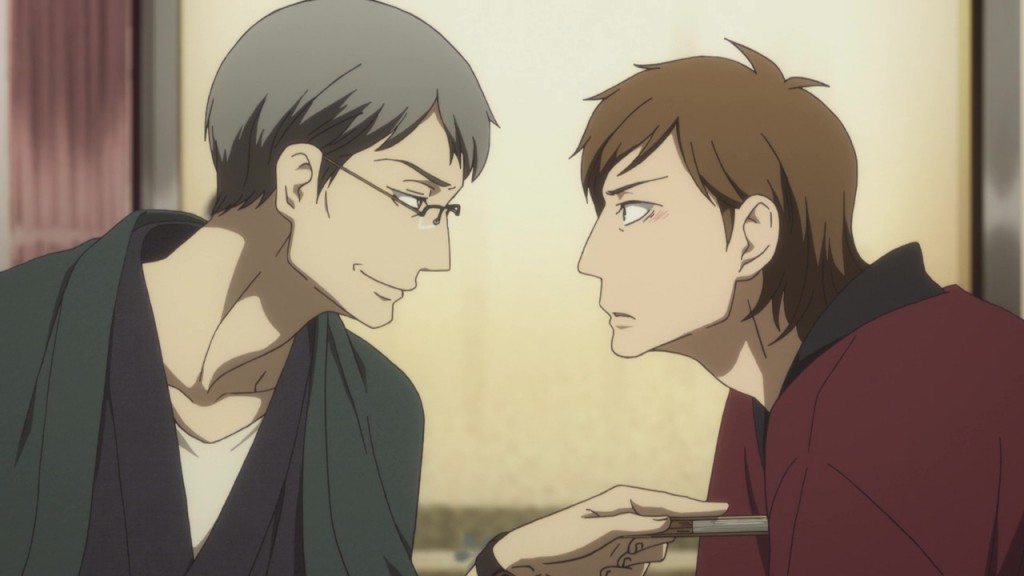