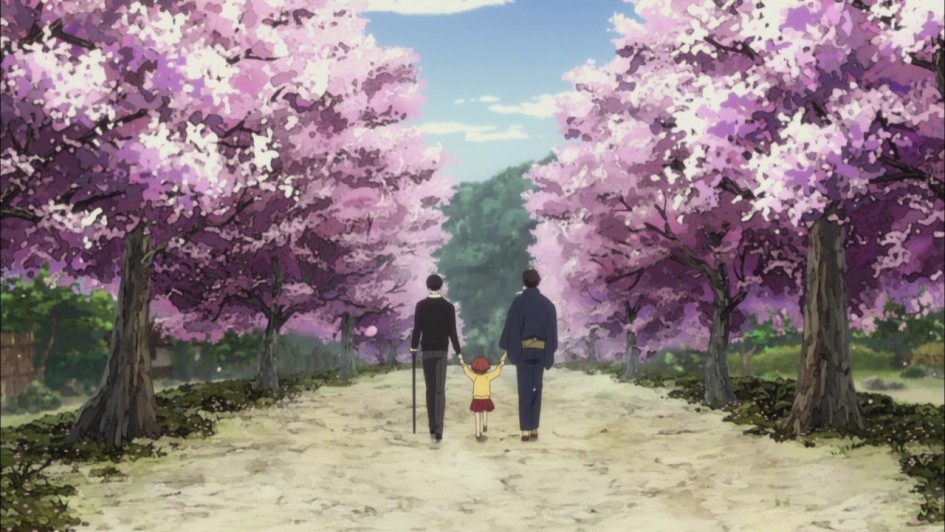 The execution of this week’s Showa Genroku Rakugo Shinju wasn’t without its flaws. With the bar being set so high, this doesn’t mean it couldn’t still be a very good episode, even though it sacrificed some of its trademark subtlety in favor of making sure to get its important point across unmistakably: Kiku, having metaphorically died in his first Shinigami performance last week, being brought back to life through interacting with Konatsu and reviving Sukeroku’s rakugo. Narratively, this was all great and important stuff, I just wish they hadn’t spelled it out for us to trip over quite as blatantly as they did. 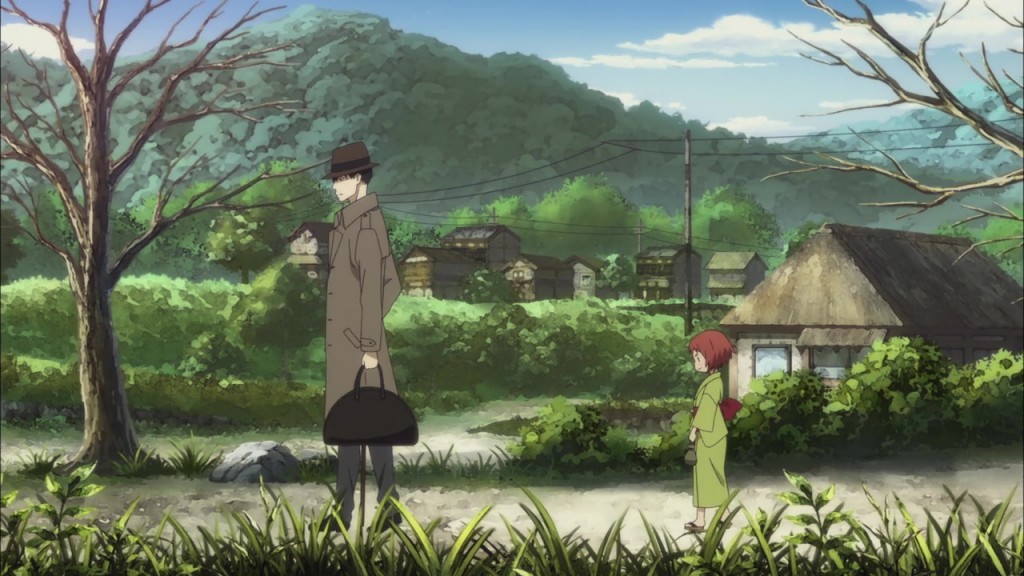 After Konatsu changes her hostile demeanor towards Kiku when she learns about his profession, it’s her job to fill us in about the events since Kiku and Sukeroku’s parting. There’s a lot of telling and much less showing going on in these first few minutes, which is unusual for a series that has always aspired to share information by means of blocking, framing and composition, through its clever use (and absence of music), and truth-on-stage framing devices. At least we learn these things from a young child, unconcerned about speaking her mind, which defuses the weakness of this way of storytelling while simultaneously highlighting another one: the choice of not casting an actual child actor to play young Konatsu. Even though this is common practice in anime, the memory of young Suzuku Hara’s excitingly honest and energetic performance in Barakamon is still vivid in my mind, and, given Rakugo‘s big underlying theme of authenticity, this episode would have benefited from having Konatsu voiced by a naturally genki child. 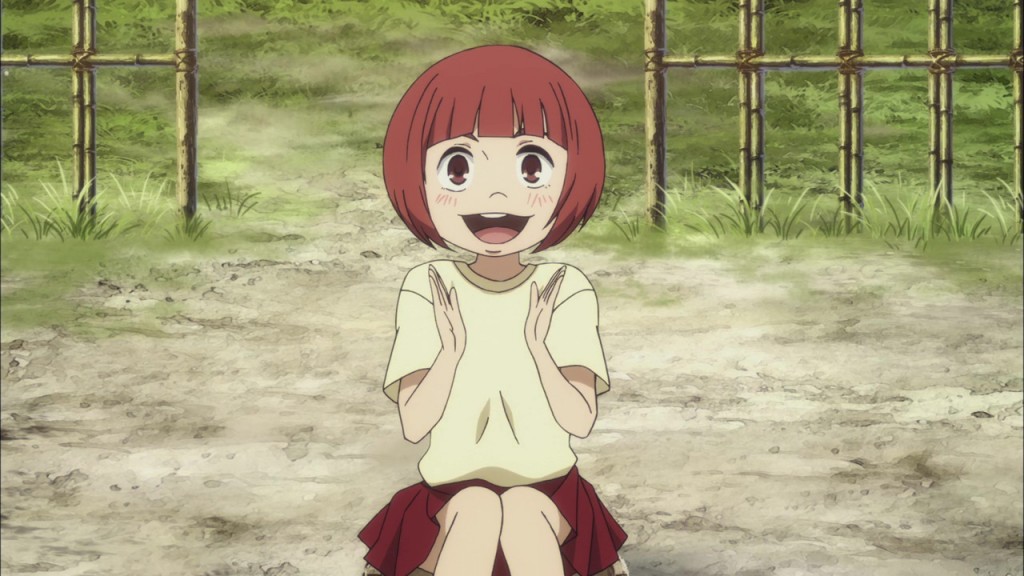 From Konatsu we learn that Miyokichi forbid Sukeroku to do rakugo, that she earned money in the not very glamorous line of work of “drinking with men and dancing in crazy costumes”, only to abandon her husband and daughter eventually to run off with another man. Konatsu is hurt and bitter, but most of all, she’s angry. Having nothing but hatred for her mother (something Kiku criticizes her for), she idolizes her father. Sukeroku, having reverted to being a full-time bum, makes his 5-year old child feel responsible for bringing food to the table. Great parenting, right there. Sukeroku has never been a responsible adult, but I had hoped to see at least a glimmer of something, anything worthy of Konatsu’s present and future admiration for her father. But there’s nothing to be admired here anymore, among the filth, regret, and delusional ideas of Miyokichi coming back soon. These people, who tried to find solace in each other when what they loved in this world rejected them, have only succeeded at making each other more miserable. 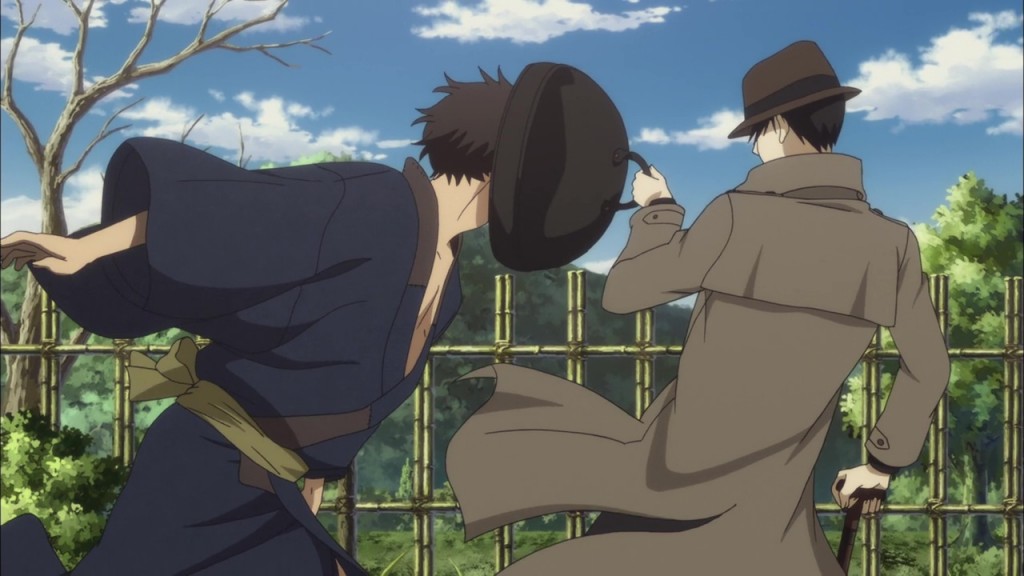 When Kiku calls out to Sukeroku, he comes running into his arms like the child he is, only to be slapped across the face before Kiku gives in and embraces his friend, despite and with all his enormous flaws. 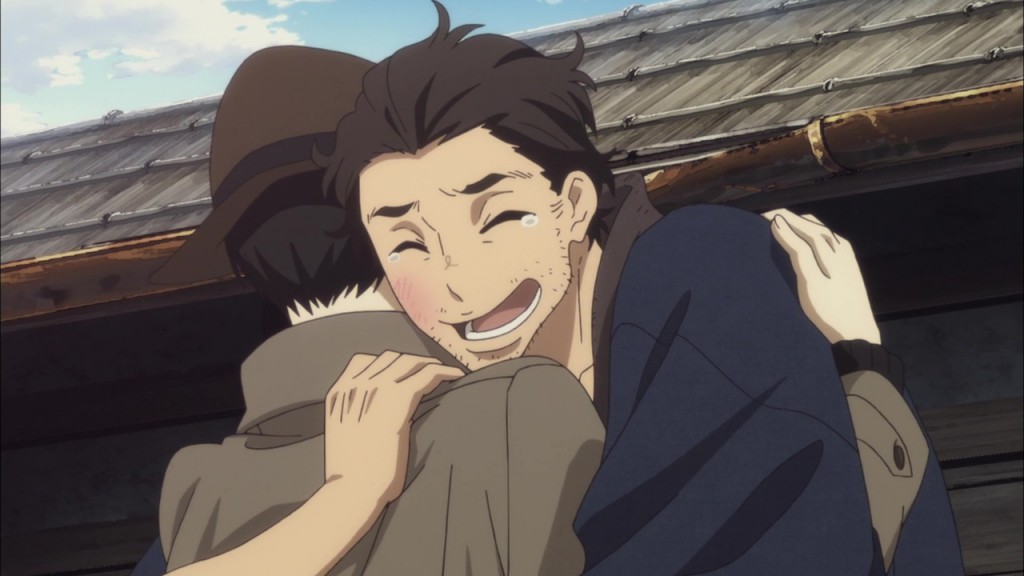 The episode gets a lot better after their reunion, despite the occasional hiccups of stating what should be obvious instead of trusting the viewer to read between the lines, which the show firmly believed in until now.

After Yakumo’s deathbed confession last week, it’s now Kiku’s time to admit to Sukeroku the true motivation behind him urging his friend to come back to Tokyo. 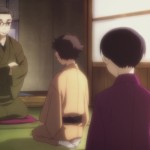 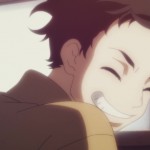 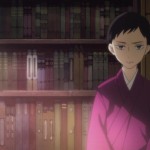 Because I need your rakugo! […] I wanted what you had so much that I burned with resentment… […] Your rakugo has given me every emotion imaginable.

It’s more than obvious that we’re talking about a lot more than artistic inspiration at this point, and Sukeroku understands. 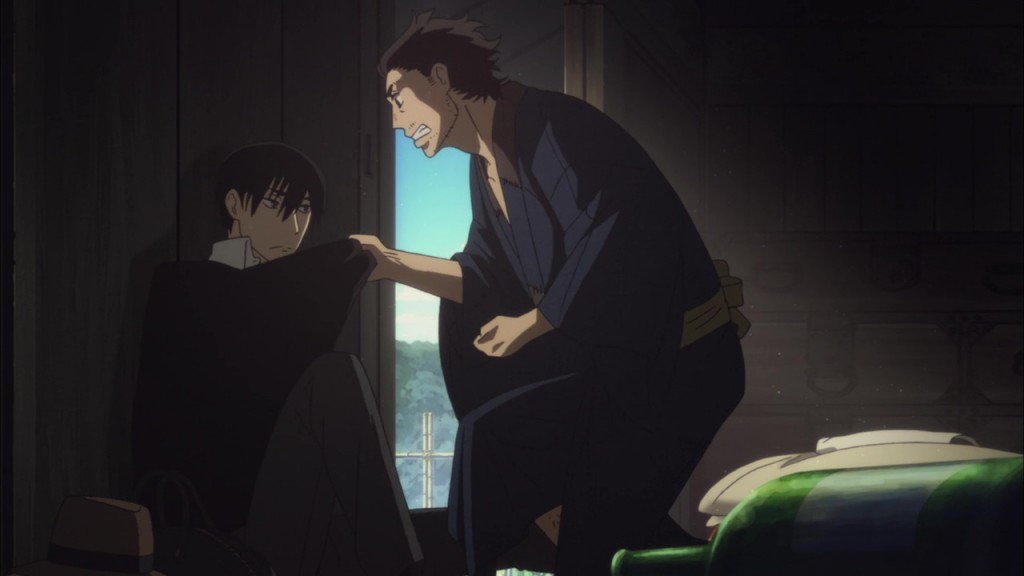 What happened to you while I was gone?

This is a powerful moment, between the two of them and for the audience, who has seen Kikuhiko turning into and embracing (emotional) death in his performance of Shinigami. It’s regrettable that we’re not trusted to make this connection by ourselves without having Sukeroku spell things out for us. 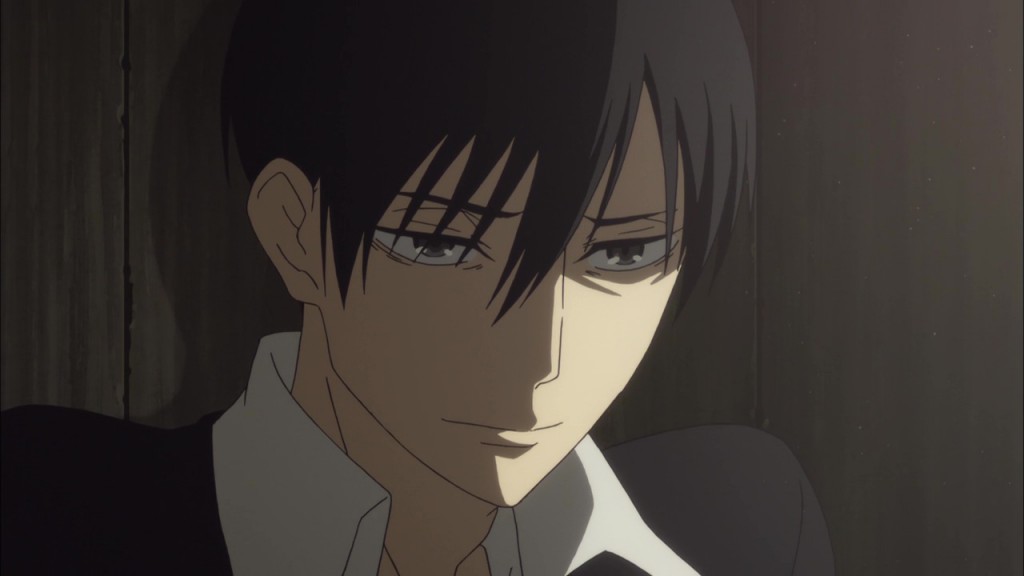 Thank you, Sukeroku. We hadn’t noticed.

Kiku, determined to make Sukeroku (and Konatsu) come back with him and accept what once was and still should be – has to be – his calling as an artist, sets out to tidy up their lives, both metaphorically and very literally. The following cleaning montage is not the episode’s highlight, but there are some genuinely sweet and tender moments between Kiku and Konatsu in what feels like a very natural, organic relationship. 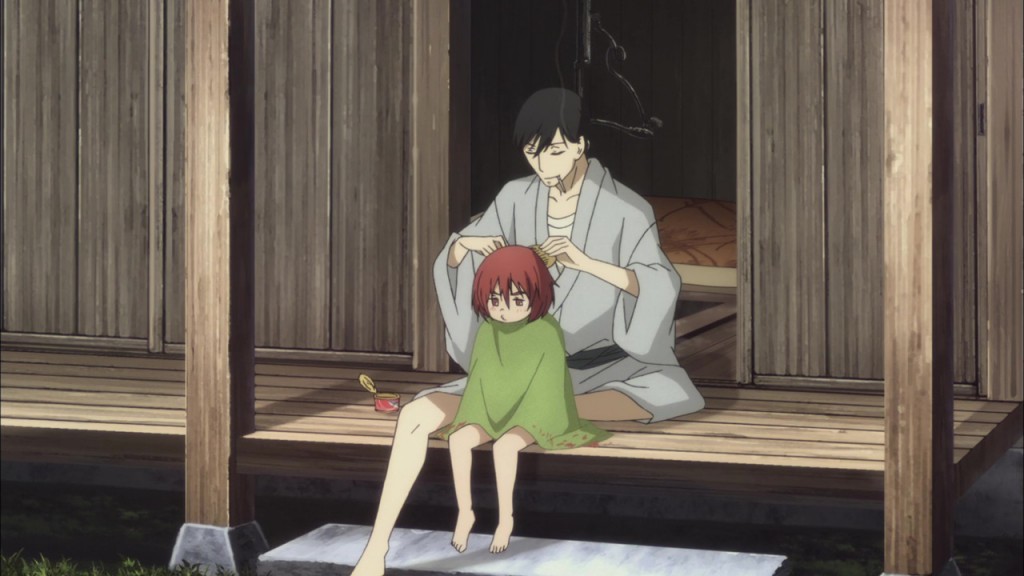 Allied in their desire to get Sukeroku off his butt and back onto at least some sort of track, they grow closer through scenes very obviously intended to show how these three people could become a family. And not an unhappy one. Performing in restaurants for a handful of people, Kiku seems to be happier than he has been for a long time.

Getting that much of a response from people by yourself, isn’t that a wonderful thing?

When he is invited to perform on a stage which used to be a place for geisha to practice, Kiku’s feeling of having come home gets a palpable dimension. This is the subtle, personal, beautiful storytelling Rakugo has always excelled at. 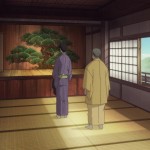 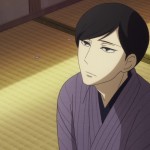 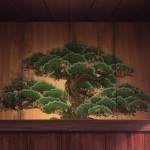 The only parts missing from the full circle are, of course, the liberation through rakugo and a heart-to-heart bathhouse talk. In episode 2, Shin-san’s rakugo liberated Bon from his cocoon of sadness and fear. 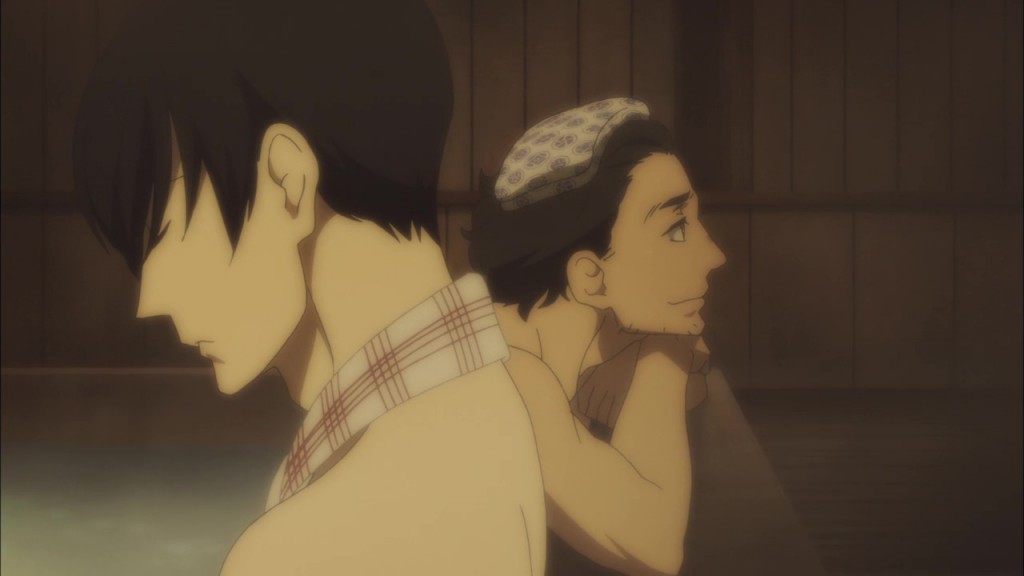 That was the only time I ever saw you cry.

Now, back with Sukeroku (and back in charge of taking care of him) as well as released from the pressures of society and the rakugo association, Kiku, despite working hard to pay off Sukeroku’s debts, is at peace, both on and off stage. 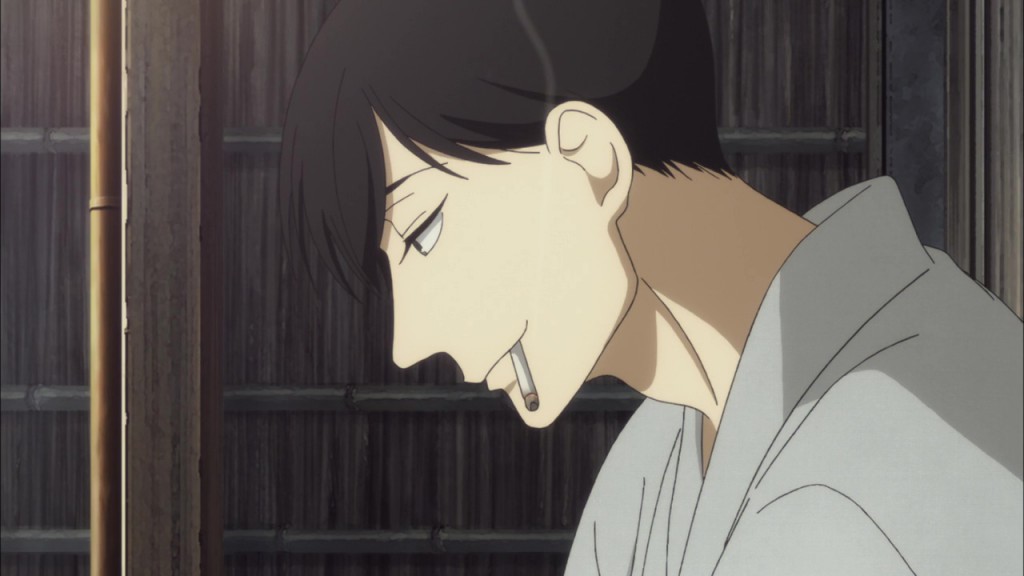 I never felt that way before now.

Kiku’s trip into the pastoral countryside and back to where his inspiration originated has saved him from becoming a dead shell just yet. This could be a beautiful, hopeful episode, if only we didn’t know how things will end for all of these people.

The only missing link now is the reawakening of Sukeroku, the artist, which, of course, has to happen via rakugo. And what better rakugo to reawaken him with than Nozarashi, the exact story Shin-san told Bon to bring back his smile and enable him to cry for the first and only time in his life.

It’s also Konatsu’s favorite, and when she asks Kiku to perform it for her, he can’t refuse. But Nozarashi isn’t one of his trademark pieces. It has always been associated with Sukeroku, and when Kiku stumbles in his performance, Sukeroku steps in to finish the story. He is back, and with him the jazz so noticeably absent recently. 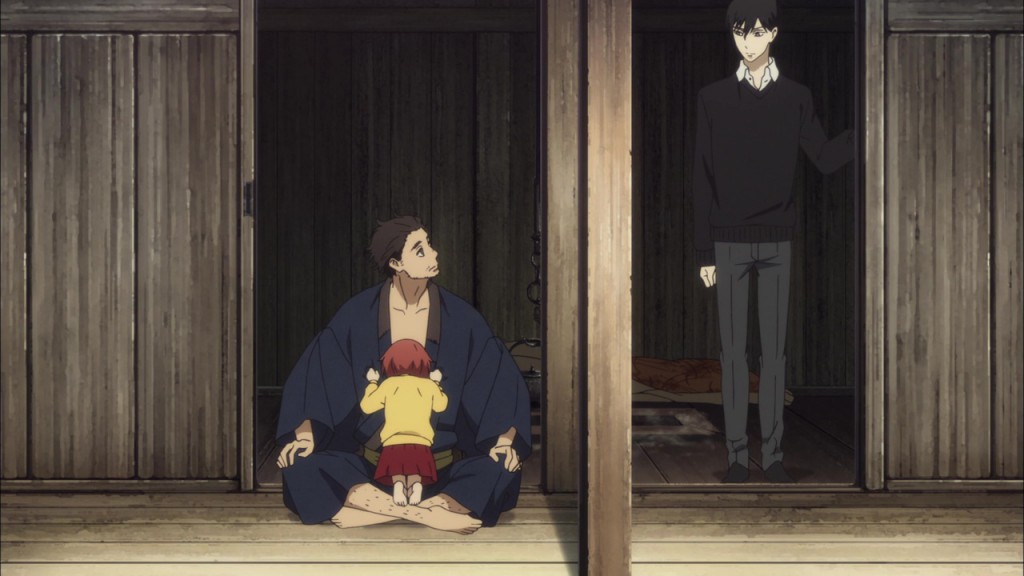 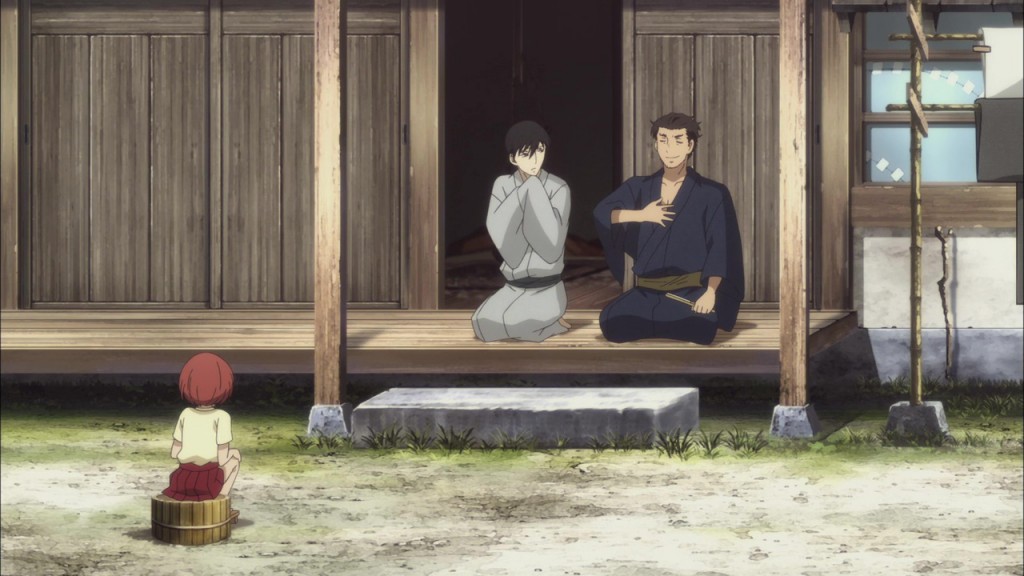 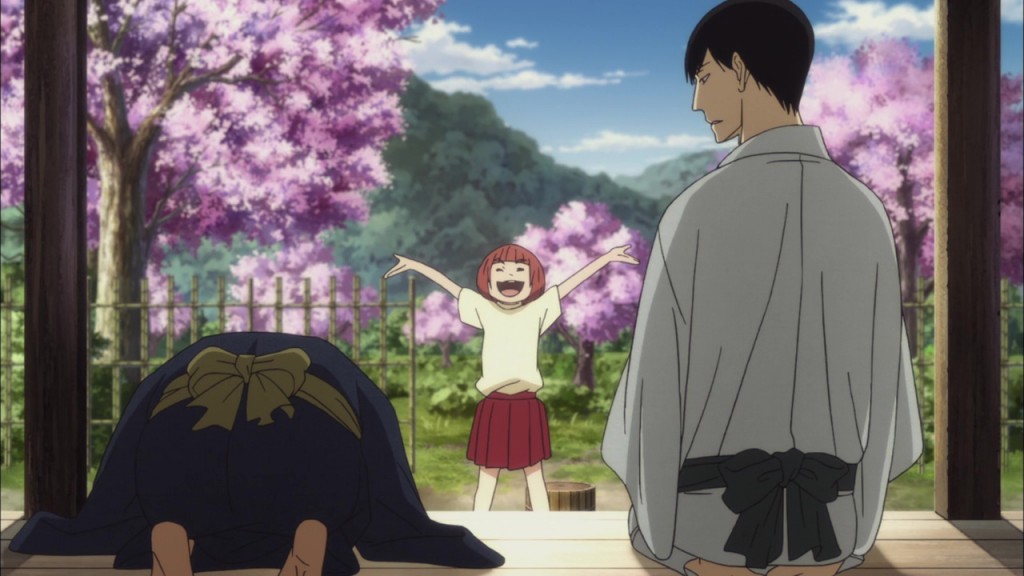 And, cheered upon by Konatsu, Kiku and Sukeroku finish the story together, performing side by side for the first time since Benten in what should be performed by one actor alone. They need each other, and even though they often enable each other’s weaknesses, sometimes, they bring out the best in one another, something that was impossible for Sukeroku and Miyokichi.

Yakumo and Sukeroku seem to be deeply connected names. I can’t think of a better way to honor his memory than for a Sukeroku to become a Yakumo.

And so they shine, laugh, bicker, and reaffirm their bond through the morbid story of a dead person’s bones coming back to live by sake being poured over them. Kiku can tell Konatsu all he wants about how beautiful women in the audience are an artist’s inspiration. His sake will never be one of those women.

When Sukeroku exclaims these words at the story’s climax, it’s an ironic, but nonetheless earnest declaration of his love for Kiku and Konatsu at that moment – a promise never to be fulfilled because Miyokichi will be back to make sure this story ends in tragedy. Hers included. 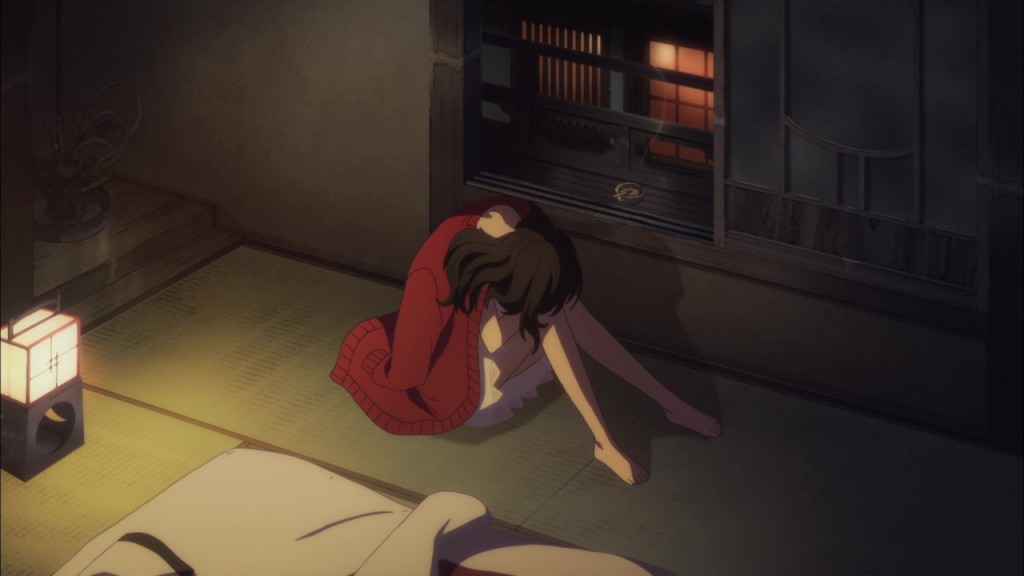 There is too much great stuff happening here for me to justify disappointment about minor issues, and I have very little doubt next week is going to turn me into a sobbing mess. Maybe I should simply stop watching now, with the image of Kiku, Sukeroku and Konatsu walking off into the land of eternally blossoming cherry trees in my mind?