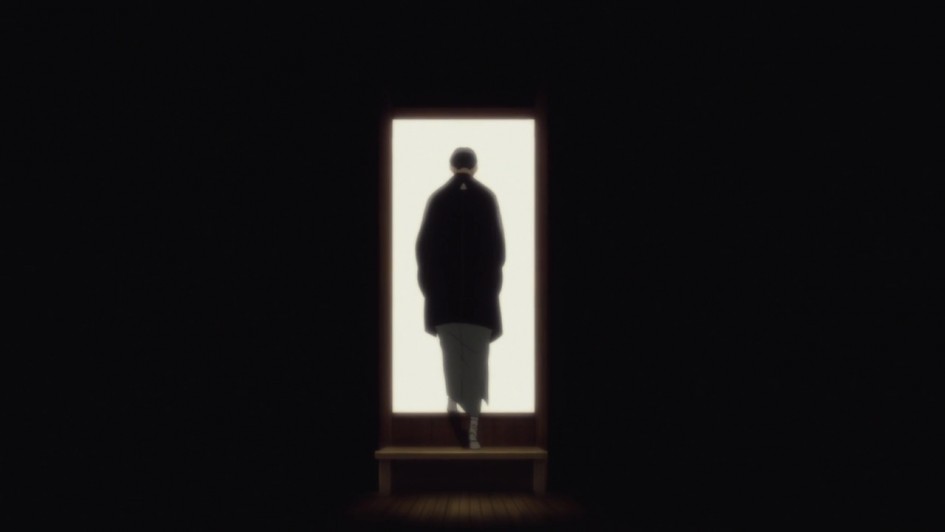 Today, the curtain fell on Showa Genroku Rakugo Shinju for the last time. Or so we thought. As it turns out, the show will be renewed for a second season, continuing the story of Konatsu, Yotaro and Kiku in the present-day timeline. While I would never have expected this show to get a continuation, I am glad and grateful to see more of these characters, Kiku in particular.

But before returning to the present, we still need to examine the aftermath of Sukeroku and Miyokichi’s death, and what that tragedy will do to the bereaved. The direction opts for a non-linear way of editing to expose the discrepancy between Kiku’s composed demeanor and his very real, palpable grief. 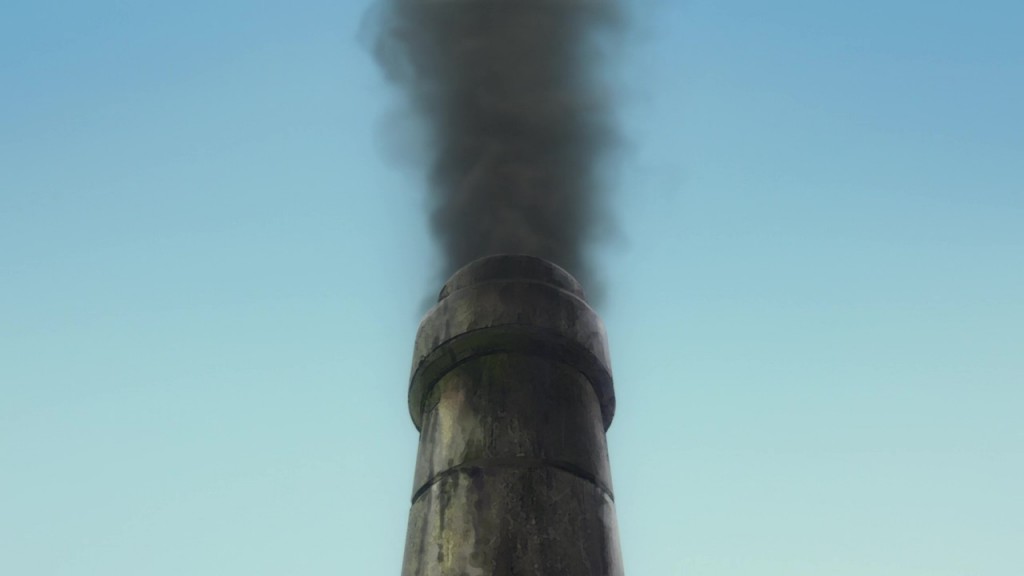 While the episode opens with a brief shot of a smoking chimney, it’s not until Kiku’s conversation with his elder from the rakugo association later in the episode that we go back to that image. Watching his friend being burned to ashes in the crematorium, Kiku is alone. All the life and joy he regained in his time with Sukeroku and Konatsu has been drained out of him. Unable to comfort Konatsu, he lets himself be cursed when she lashes out in helpless anger. 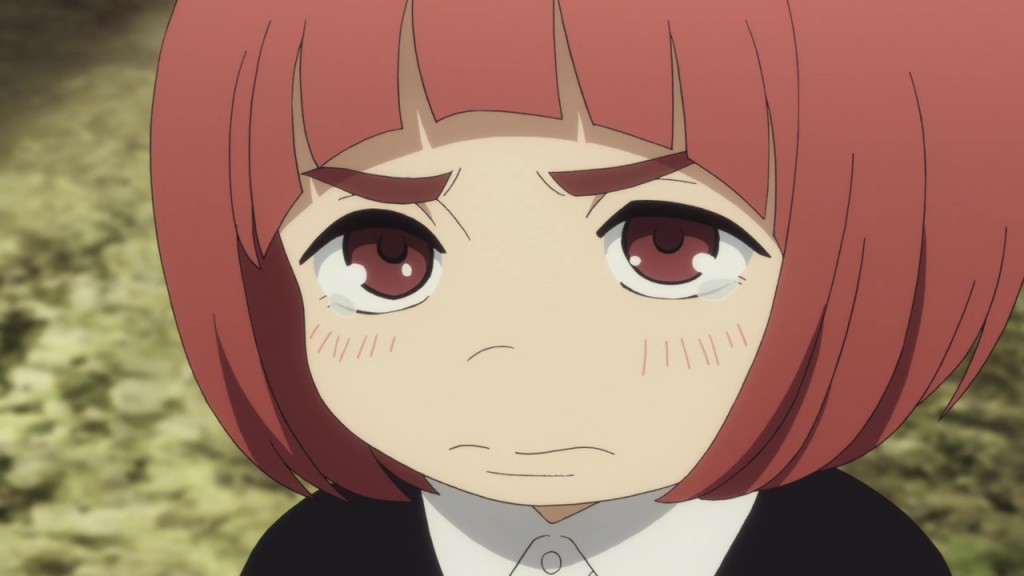 This all happened because you came here!

We’ve seen cold and distant Kiku before, but never has he been so lifeless. Akira Ishida manages to infuse Kiku’s detached monotony with a vulnerability that feels closer to real grief than any prolonged sobbing would. His performance has elevated an already intriguing character to unusually complex realism.

But Kiku will cry, for the first time since being forced to admit his abandonment in episode 2. And it will be the discussion about the future of rakugo without Sukeroku at his side that will make him lose his composure for the last time before accepting his burden. 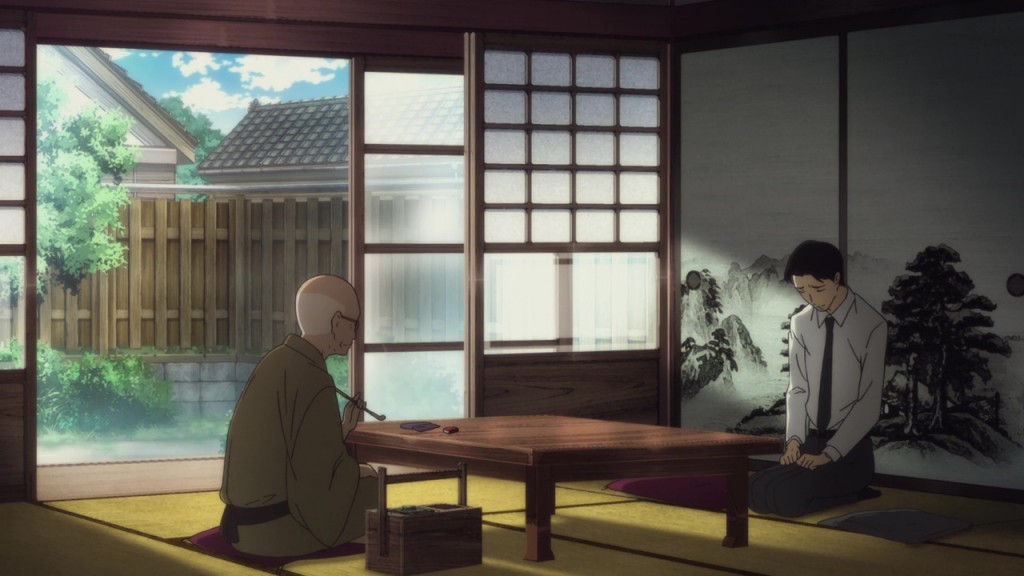 You’re the only one of your generation.

Kiku wasn’t supposed to be the only one. He was supposed to preserve rakugo, while Sukeroku was the one chosen to revive it. That was their promise. Without Sukeroku, what point is there for Kiku to continue preserving what cannot be revived? 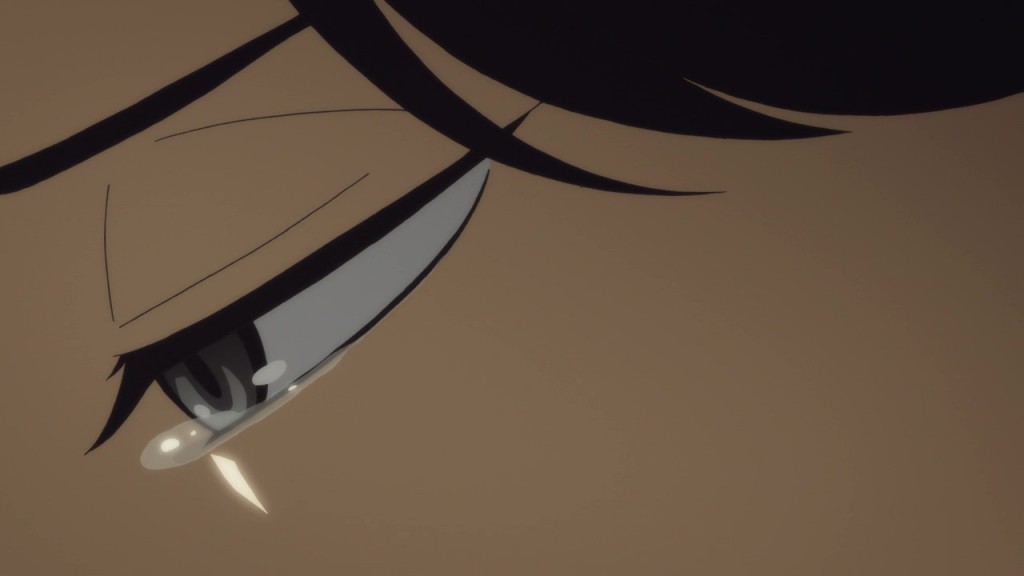 The flow of the era can’t be altered. We can’t control what the audience wants.

I thought it was survivor’s guilt which haunted Kiku in the form of Sukeroku’s ghost. But without Sukeroku, Kiku cannot change. It was their promise which cursed Kiku to live in the past, preserver of a dying art form, the shinigami of his friends and rakugo itself. 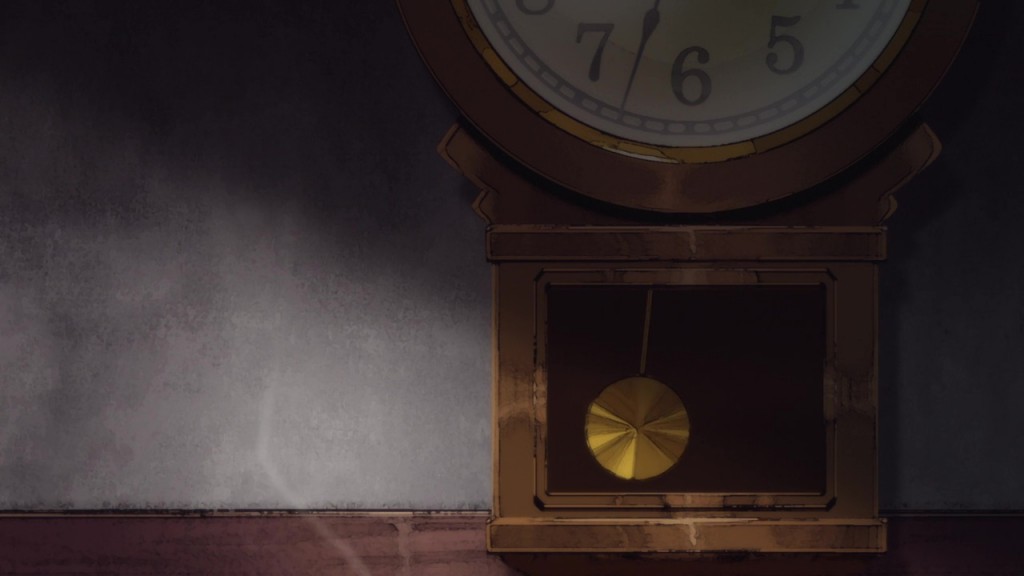 With the clock on the wall ticking the time of his life and chance at happiness away, Kiku finally resigns himself to becoming the next – and likely last – Yakumo. Keeping his part of the promise and accepting the burden placed on him by the people around him, he surrenders, unable to ever leave Sukeroku or his own name’s shadow behind. And the nail gets hammered down (visually and figuratively, because that’s just how this show rolls). 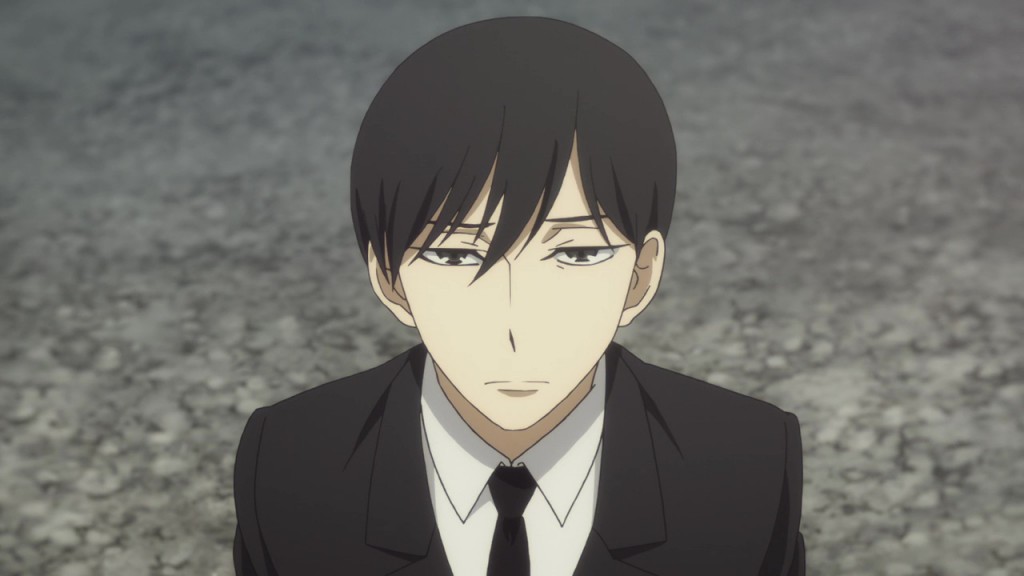 I’m the only one who can let you rest in peace.

Nozarashi‘s crows are crowing under the red sun when Konatsu recites her father’s trademark story and threatens to kill Kiku out of revenge. But there’s nothing left of Kiku to kill at this point. 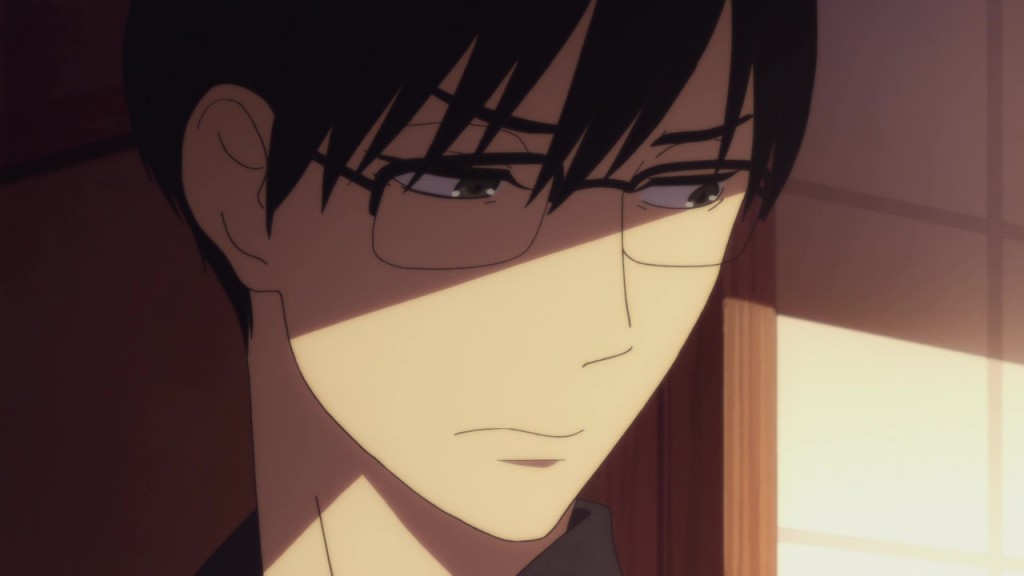 Kill me, then. I’d feel much happier.

The shinigami has caught up with him, and this time, it’s not just Kiku coquetting with the idea of emotional death as a way to escape. It has become his only strategy at survival. And so, he walks onto the stage, the only path left for him to stay alive, with everything around him engulfed in darkness. Kiku, as we knew him, has died. 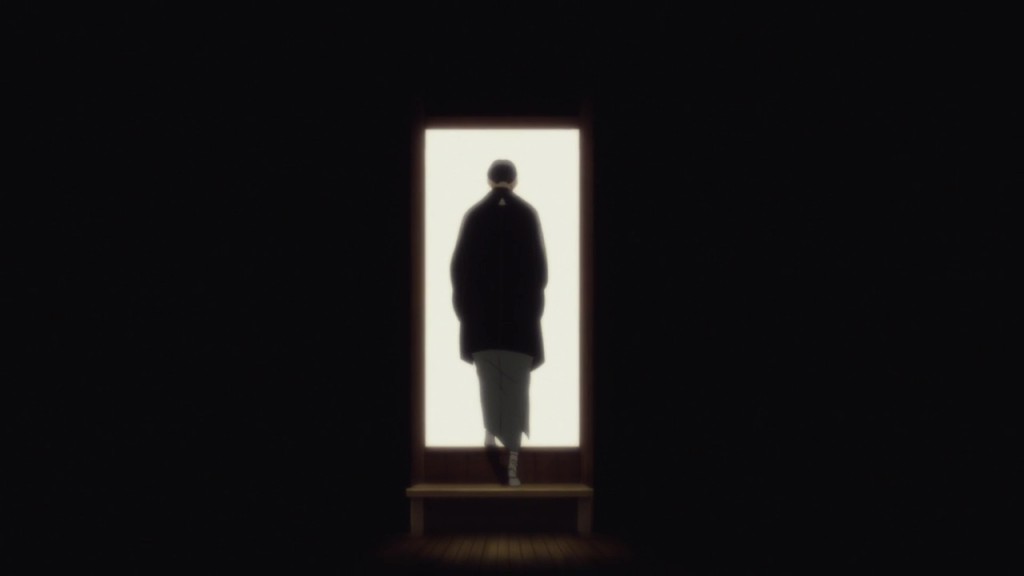 My name is Yurakutei Yakumo. I have long forgotten my real name.

This is a painful, but perfect ending to Kiku’s story. It makes me sob with sadness and smile with appreciation at how wonderful his story has been constructed and presented.

Except that it’s not the ending. Neither the last act of Kiku’s nor the ending of Konatsu’s story has yet been written. This would be the perfect ending for a tragedy. But maybe, things don’t have to end in tragedy just quite as Kiku has laid them out for us and himself.

As if to defy the crows (and Kiku’s advice not to entertain impossible dreams), Konatsu screams out Nozarashi, unwilling to let her father’s rakugo die with him. 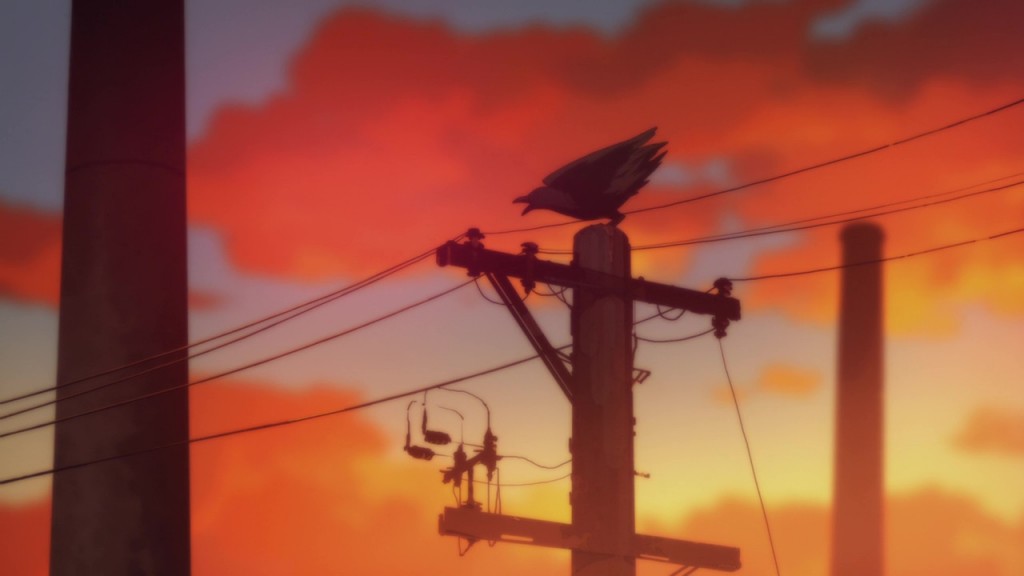 Holding onto his image, it’s almost as if she needs to prove their existence. Nozarashi will remain the key to unlocking Konatsu’s emotions long after Sukeroku’s death. Embracing pain over indifference and oblivion, Yotaro’s performance of her father’s rakugo makes her cry, but that’s exactly why she asked him to perform for her. 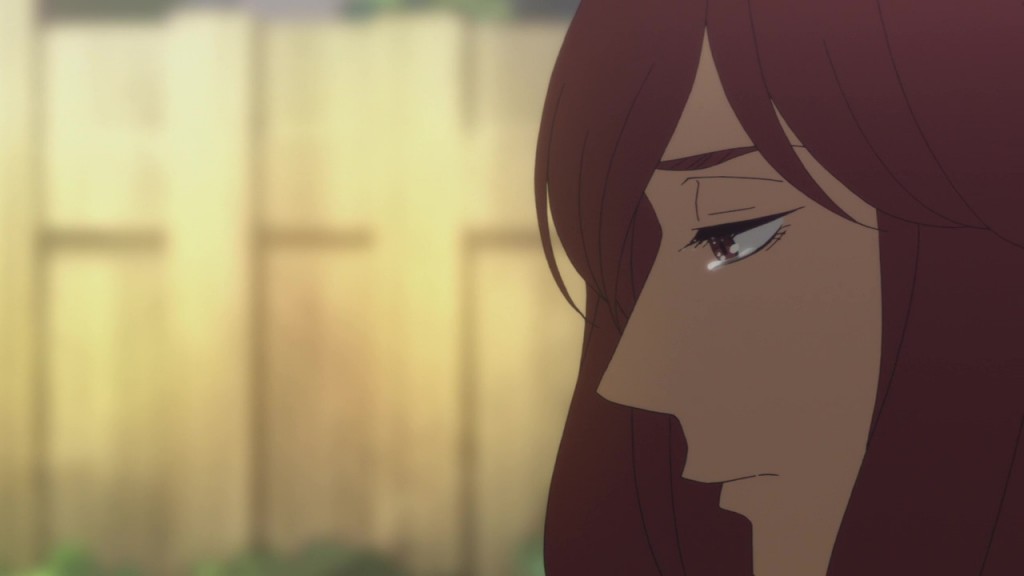 She is strong, but she is also selfish. Pregnant without a father in the picture, she vows never to get married and keep Sukeroku’s bloodline alive. May the flame of the candle be passed on. There’s already a strong chemistry between her and Yotaro, and seeing them bicker and squabble is both beautiful and painfully reminiscent of the relationship between young Kiku and Sukeroku. 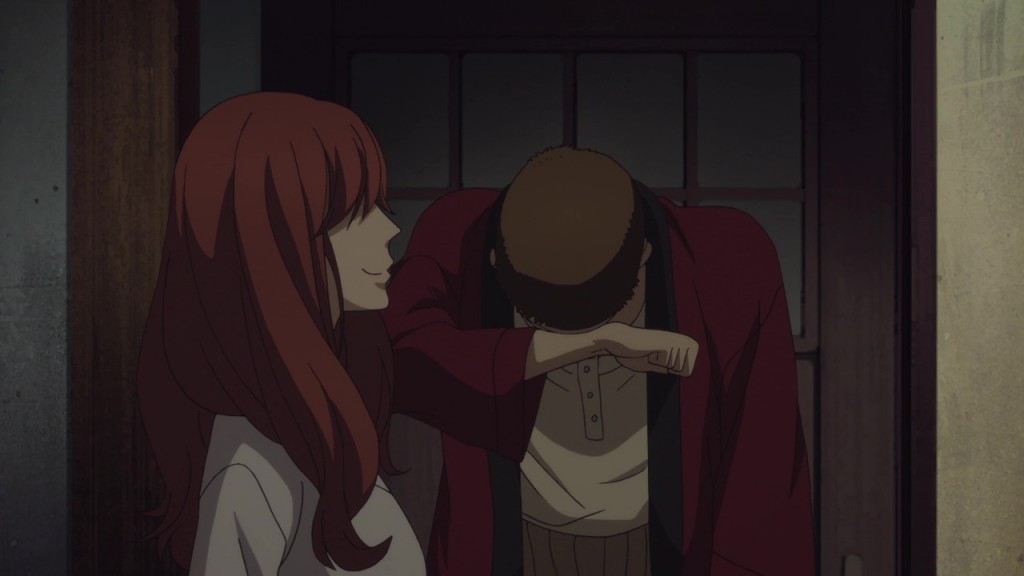 Society is changing, and Konatsu might have more possibilities (and brains) to realize her dreams than her parents ever had, despite her foster father’s continued discouragement. Being raised by anti-helicopter parent Kiku might prove to have some advantages, after all.

But this will all be explored in the coming second season, so instead of giving in to speculations, I want to look at the episode’s final, glorious minutes. 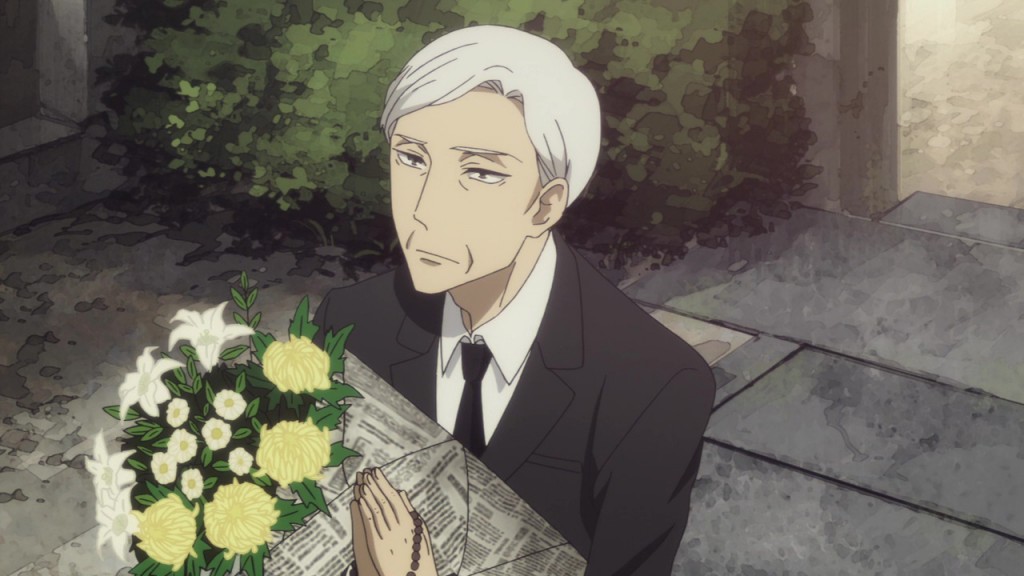 It’s the anniversary of master Yakumo’s death. Time for Kiku to reflect upon the state of the world, rakugo and his life, which are too closely intertwined to reflect upon separately. I will continue to call Kiku by this name even though he has long since become Yakumo 8th. A name, as we know, has a lot of power over a person. And I want to continue to believe in Kiku and Bon more than Yakumo.

Kiku has truly become the sole preserver of rakugo. Unchanging by default, death (the physical, not the figurative kind) has become a recurring acquaintance for him and Matsuda, with Kiku being the oldest of the rakugoka left alive. 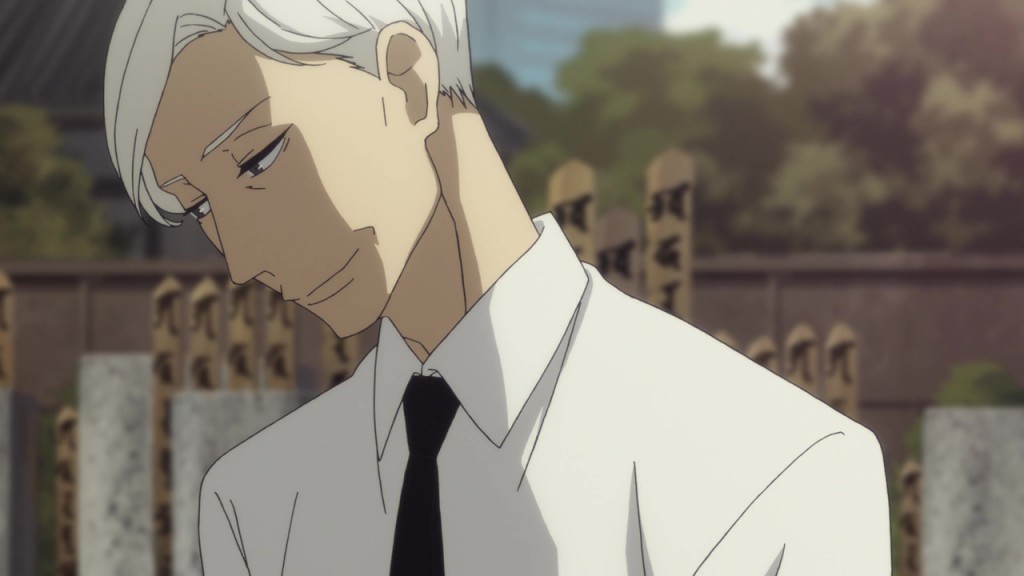 I feel like they’re preparing for my death. My position keeps changing while I don’t change at all.

Death, kneeling in front of a grave, musing about death while smiling a sad, empty smile – there’s not really that much left to interpretation here. When Sukeroku’s ghost visits him at their master’s grave, Kiku isn’t shaken. Being haunted seems to have become a state of normality for him at this point in his purgatory existence. It’s Sukeroku’s silence that he cannot bear. 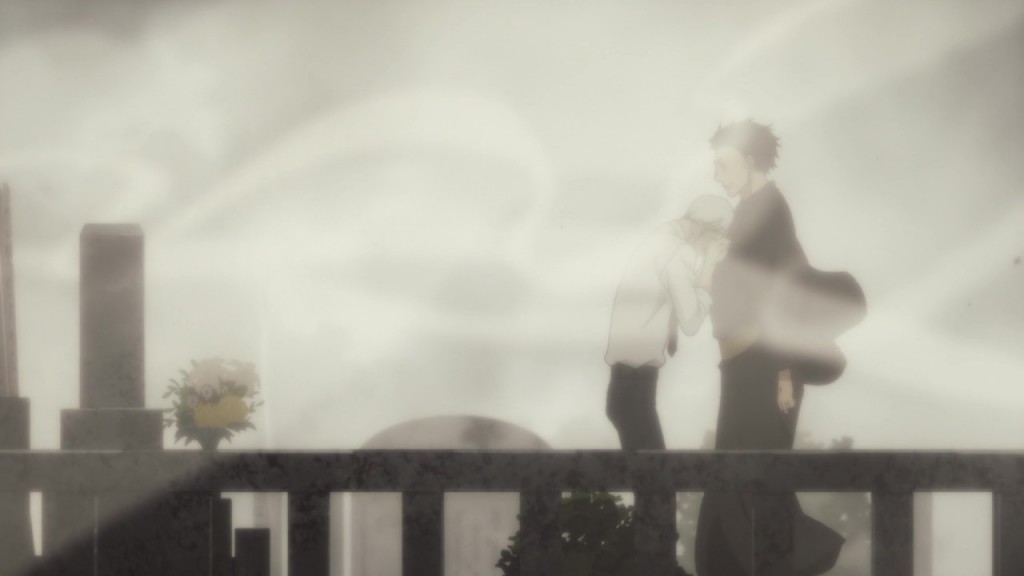 Hey. Say something already. You’re a storyteller, aren’t you?

After all these years, Kiku is still lost without Sukeroku’s judgment. And without his friend’s rakugo to complete his own.

Out of the smoke walks Yotaro, freshly promoted to shin’uchi after working diligently to find his own rakugo and, in turn, keep his promise to Kiku. Their following exchange is a pinnacle of poignant storytelling, managing to be graceful while ensuring everything that has to hits home with a bang – without punching the audience on their noses so hard that they would fall over and not recover. 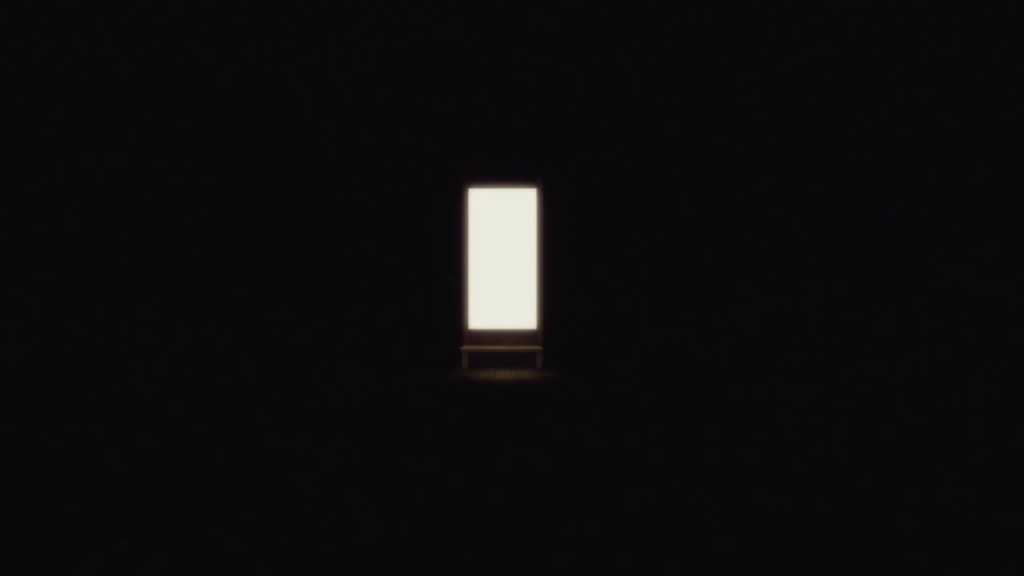 Showa Genroku Rakugo Shinju was a show about people struggling against the restrictions forced upon them by the society they live in. Internalizing other people’s expectations as their own, they learned to adapt by denying part of who they are – or failed and burned in the face of their inability to change. But it wasn’t just society’s pressure which broke them. Not getting what they thought they wanted, they became unable to find happiness anywhere it might have presented itself instead. Kiku resigned to living his life as Yakumo. Bearing a name he never wanted in a life he never enjoyed, he has forgotten who he once was. And what made him fall in love with the art he vowed to preserve. By shouldering the burden of being the preserver, he became unable to see the possibility of happiness, because he became unable to change. On stage, he was the shinigami. Off stage, he was just dead. For Kiku, this is just how the world works after Sukeroku left him behind. 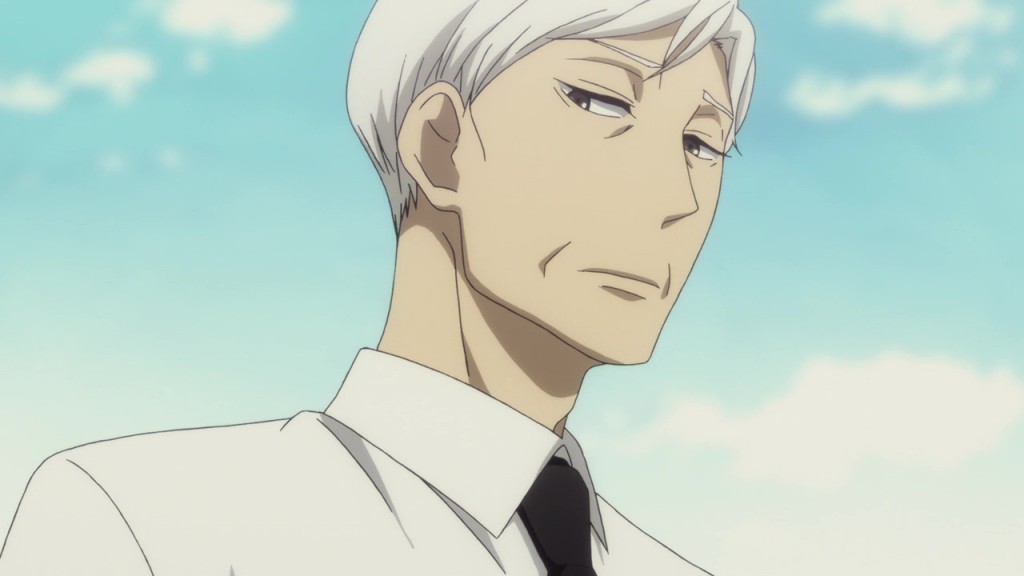 One does adapt to fit a name, don’t they?

So he became Yakumo.

Yotaro, his sweet, simple, innocent apprentice, shares his sentiment of the importance of a name, but has a much healthier perspective. He doesn’t feel cursed or burdened by the “fool” he has been named after. He chooses to feel honored and embrace it. 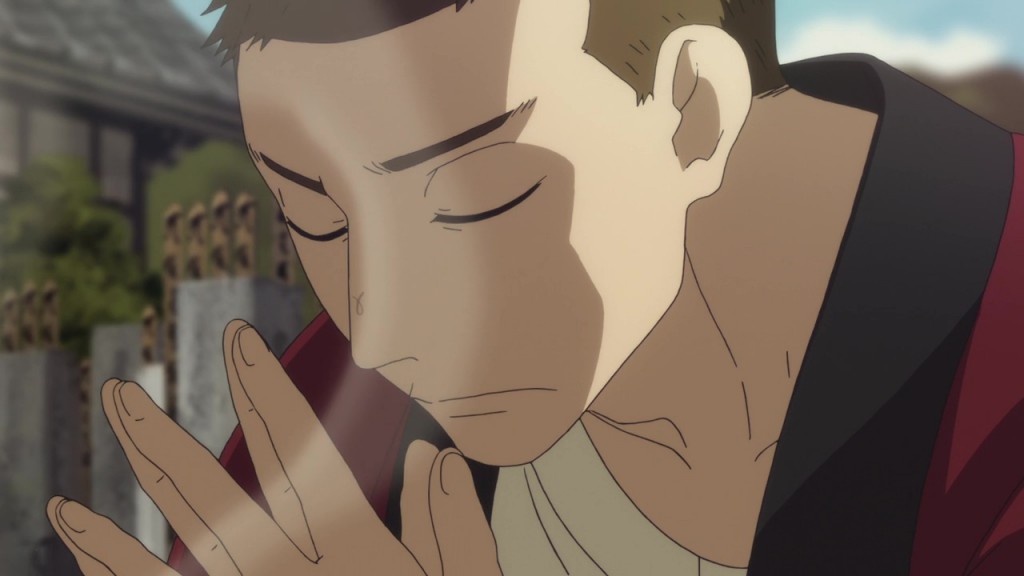 That’s the name you gave me. And being human means changing whatever way it takes to suit your name.

“Being human”. Which is what this was all about for Kiku in his tragic search for Sukeroku and Miyokichi.

Yotaro believes in the possibility of change even after being designated the fool. And Yotaro made another choice. Once he has outgrown the fool, he no longer aims to follow his master’s path of inheriting the Yakumo name and preserving the art of rakugo. Once he’s found his own rakugo, he wants to be the reformer. 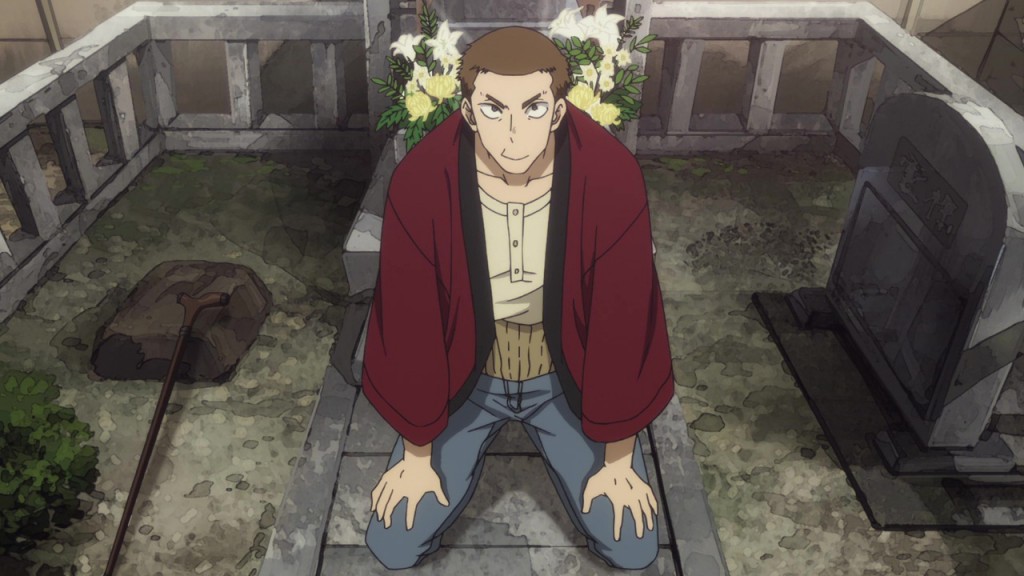 Let me inherit the Sukeroku name.

But Yotaro, in his innocent foolishness, is a lot more mature than Kiku’s Sukeroku ever was. He believes in the possibility of growth beyond what has been carved out for you by others – without having to deny it as a consequence.

And so, Kiku’s shinigami managed to achieve something Kiku himself would never have dreamed of when he resigned himself to his fate. His God of Death inspired Kyoji to become Yotaro and Yotaro to aspire to the dream of Sukeroku. Opening the door to the past, he brought back the spark of renewal and reform where there was only misery and loneliness. It’s a living, breathing spark, opposed to all that unhealthy worship of the dead both Kiku and Konatsu are defined by.

The memory of the dead, no matter if idealized or haunted by, cannot bring about the change so desperately needed. With Sukeroku’s death, Kiku’s rakugo has become an unchanging, tragic existence destined to die with him. Reviving rakugo has been synonymous with reawakening Kiku’s soul and enabling him to move on since we learned about his promise with Sukeroku. But it isn’t Sukeroku’s Nozarashi which has the potential to release Kiku from the grip of the shinigami. Nozarashi itself has become just as unchanging and destructive as Shinigami. Yotaro still has to find his own rakugo. And when he does, maybe, just maybe, Kiku will be able to fulfill his promise. We will have to wait and see. 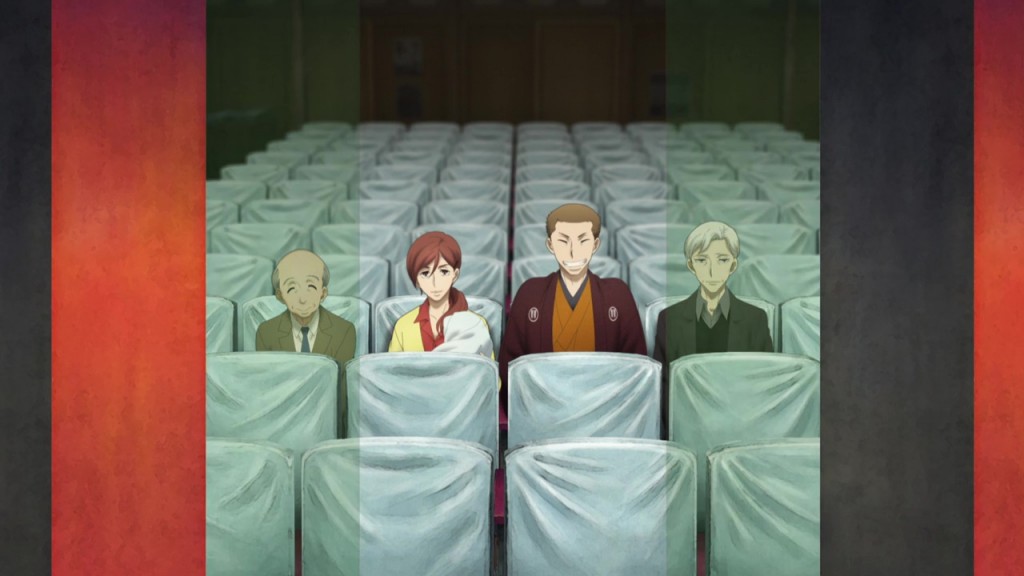 Is that end enough for you?

…asks Yotaro when he bows to us after the changed credits.

It would be for me, as this season told and concluded its arc in such sensitive, mature and brilliant way that I am left with nothing left to want out of this show.

But I am more than willing to be turned into a conspirator for act 2. I’m sure there is more truth to be found on this wonderful stage that has already been set.

Thank you, Rakugo, for three thrilling and deeply moving months. 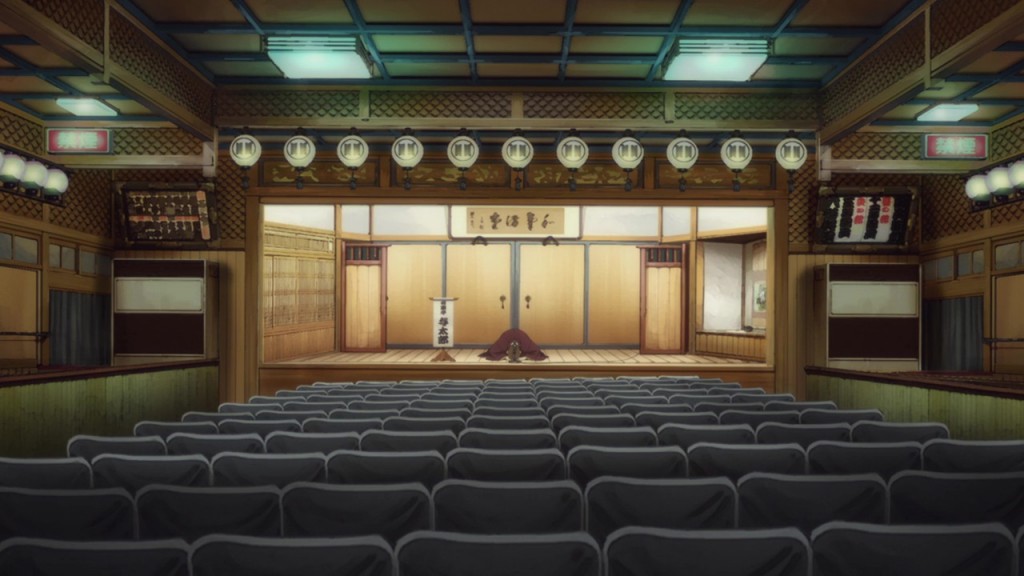