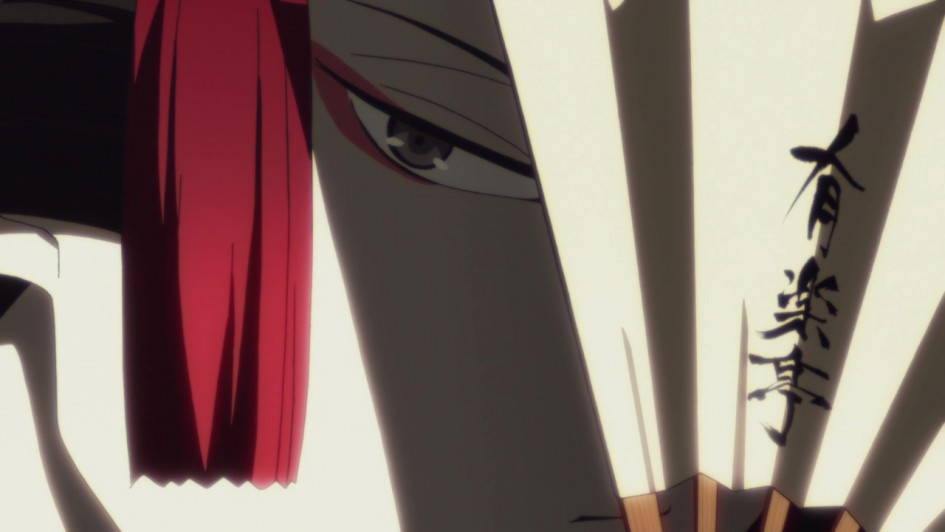 A lot of important things happened this week in Showa Genroku Rakugo Shinju, even if, at the beginning of episode five, not much seems to have changed since we left our characters last Friday.

Bon and Shin-san are still living together as roommates, with clearly divided roles and responsibilities. While Shin-san is enjoying the bohemian lifestyle of a poor but going-to-hit-it-big artist (“You can’t go anywhere in rakugo without visiting the red-light districts”), Bon gets to worry for the both of them (“You call it artistic reference, but going on like this will kill you”). 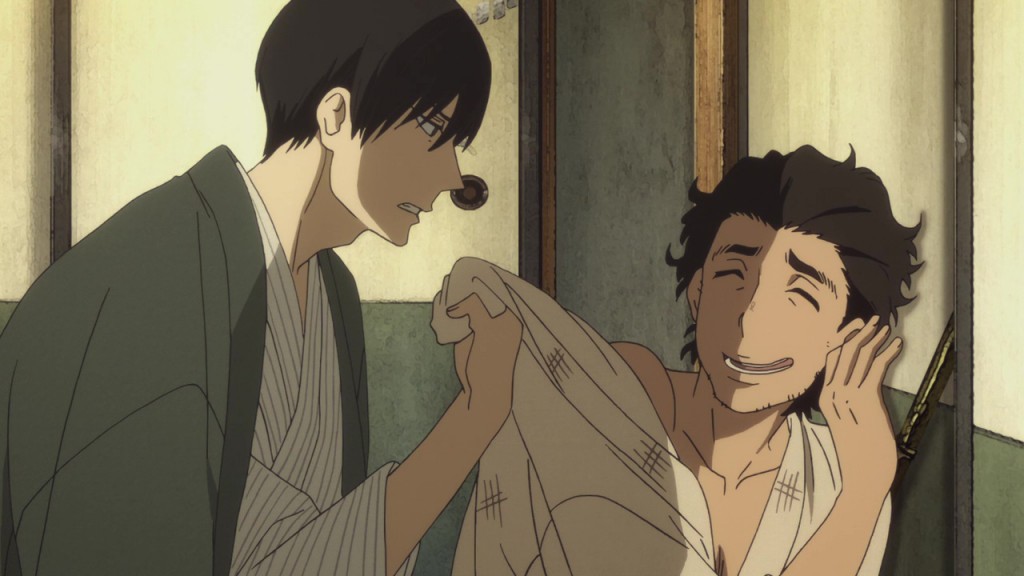 Something else that hasn’t changed is Bon’s apparent disinterest in women, shown in his disapproval of Shin-san bringing home two lovely ladies. Shin-san, who casually mentions a wealthy sponsor in their subsequent domestic quarrel, might be street-smart, but his cluelessness about what’s going on with Bon is rather baffling. 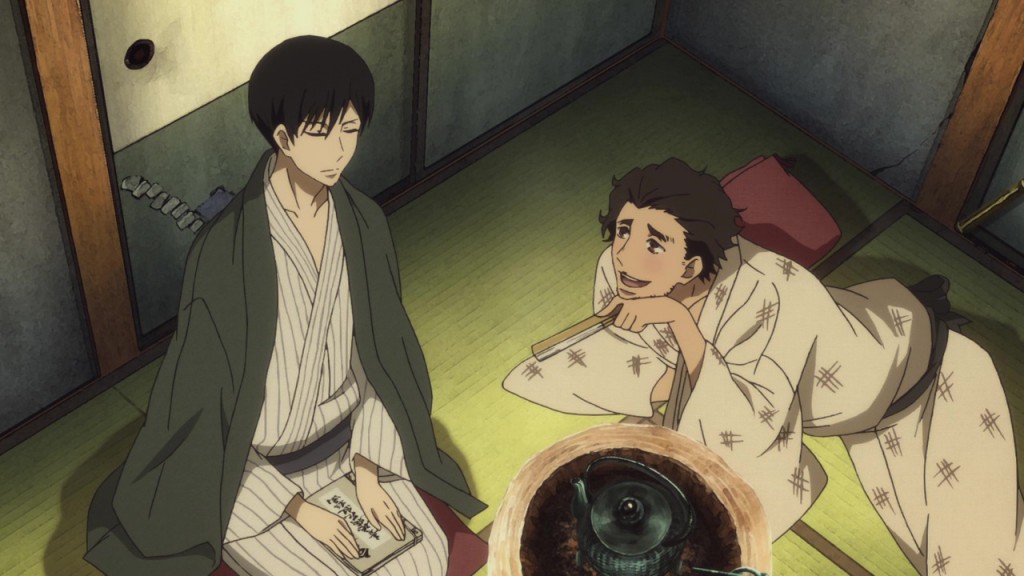 Are you jealous because I get more girls than you?

No, Shin-san. He really isn’t.

Miyokichi, the geisha-in-training Bon is still visiting frequently, has a better grasp of the situation, telling her boss that Bon “isn’t like that” when she is suspicious of Miyokichi bringing home customers. 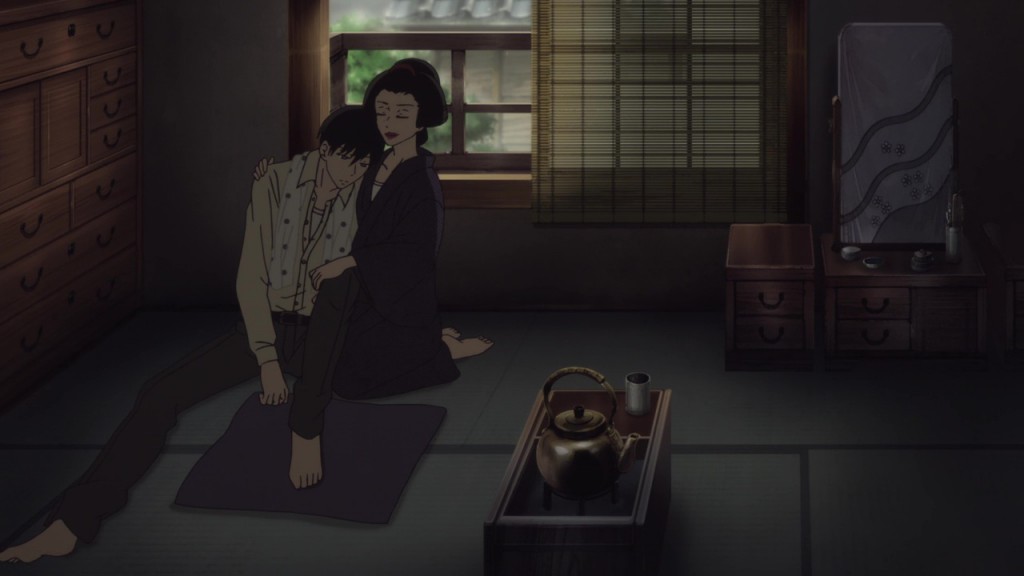 There’s not much difference between an actor and a geisha.

When we get Bon’s first POV shot of looking at her assets, all the credit goes to Rakugo‘s excellent characterization for turning a typical voyeuristic male gaze into something more akin to a quietly contemplated “what if…”. Despite showing no real sexual interest in her, Bon keeps coming back, sharing intimate moments – physically and emotionally – that manage to feel both gentle and awkward at the same time.

Rakugo… I might not be cut out for it.

Claiming that “a woman wouldn’t understand” (bravo, Rakugo), he nonetheless shows an honesty and vulnerability around her that he rarely allows himself. Admitting to holding on to his cane even though he doesn’t really need it anymore, this short little exchange tells more about Bon’s emotional state than any lengthy inner monologue would. Unable to believe in himself, he chooses to cling to his disability out of fear of what he might be capable of. This is brilliant storytelling. 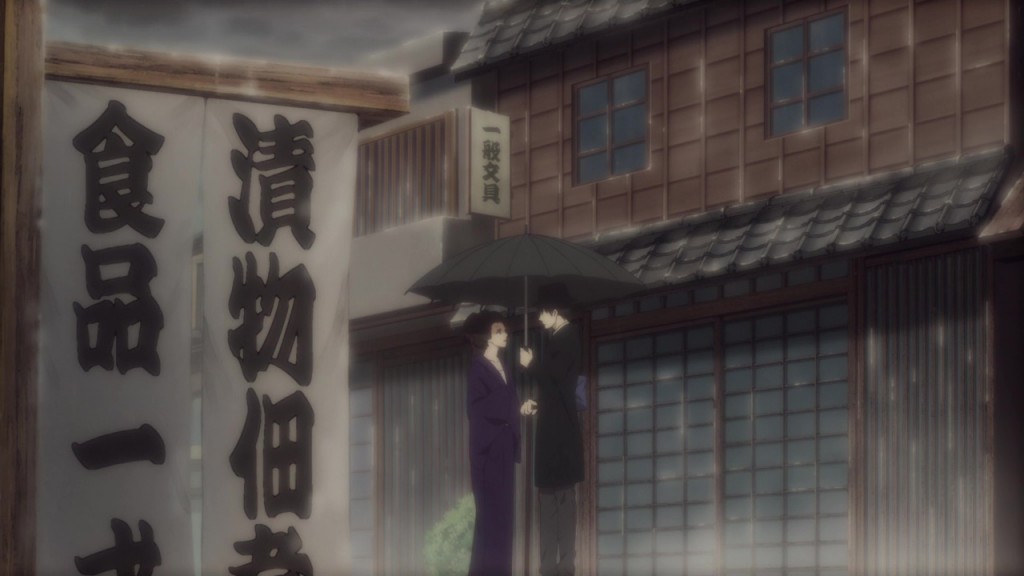 Still, seeing Bon wade in self-doubt only works for so long. It’s time for him to take the stage, and he finally does in the grand finale of this episode. Not in form of a rakugo monologue, but in the lead role of a kabuki play he, Bon and some other young actors have put together. The play is the famous Benten Kozo, no less, in which the lead character (played by Bon) dresses up as a woman to fool a shop owner in a robbery scheme. Very uncomfortable with his female role and outfit at first, Bon begins to shine when he realizes the audience is completely smitten with him. 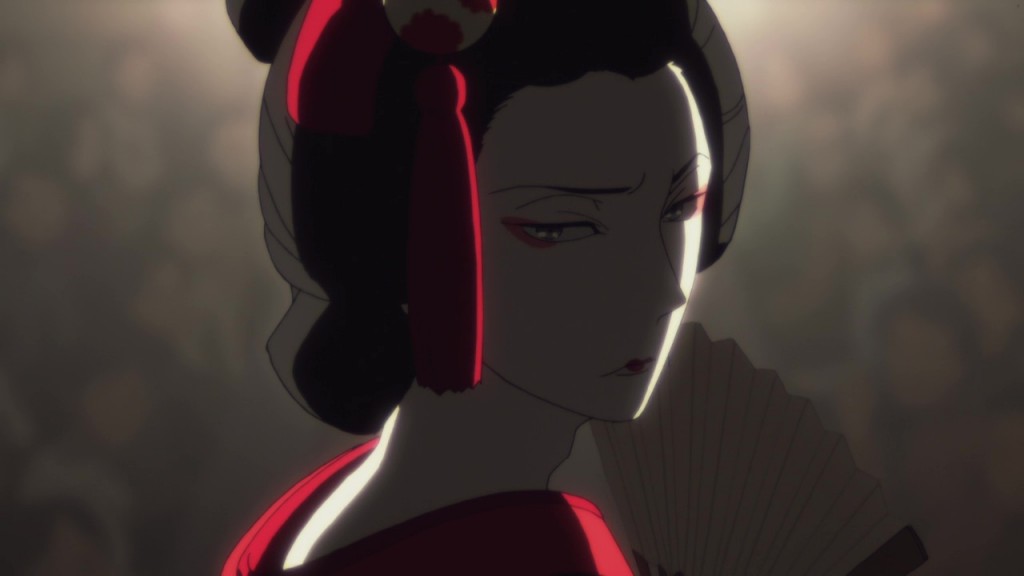 Every time I move, the audience’s attention moves with me.

When his gender is revealed in the grand finale and Bon’s voice switches back into a lower register, changing his posture while still retaining the female make-up, he experiences for the first time what it’s like to be celebrated and carried by an audience. 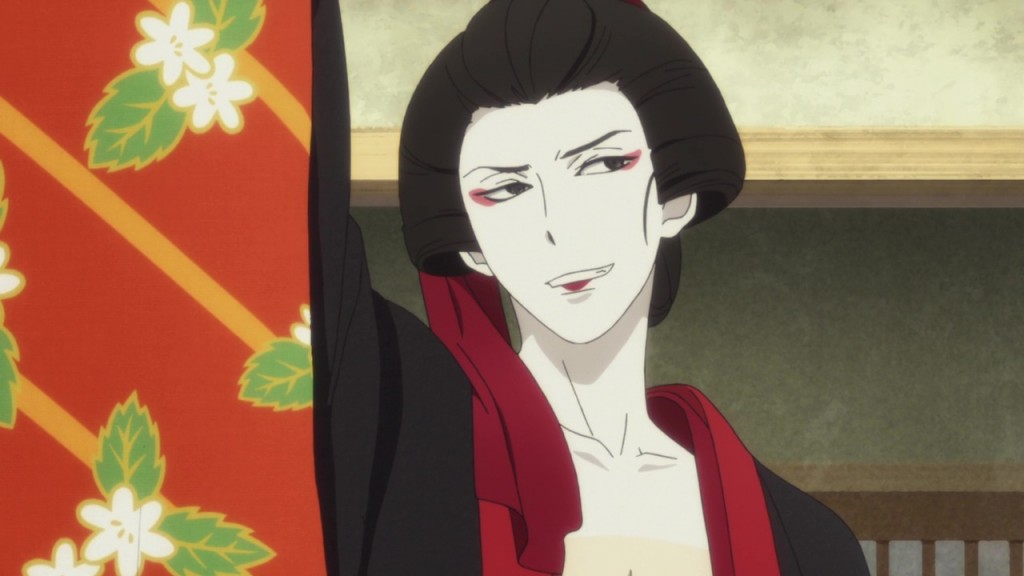 It’s a magical, transformative moment, and I cannot wait to see what this experience will do to Bon, both on stage and in his approach to life.

Before finishing what has already and once again become a much too long episodic review, I want to look at the show’s title again. I’m usually wary of reading too much meaning into symbolism, but in a show that communicates huge chunks of its plot and character development through classical stage plays, thoughts like these don’t feel too far-fetched.

When Bon asks Shin-san to perform a certain rakugo for him, we get a first direct reference to a lovers’ suicide. 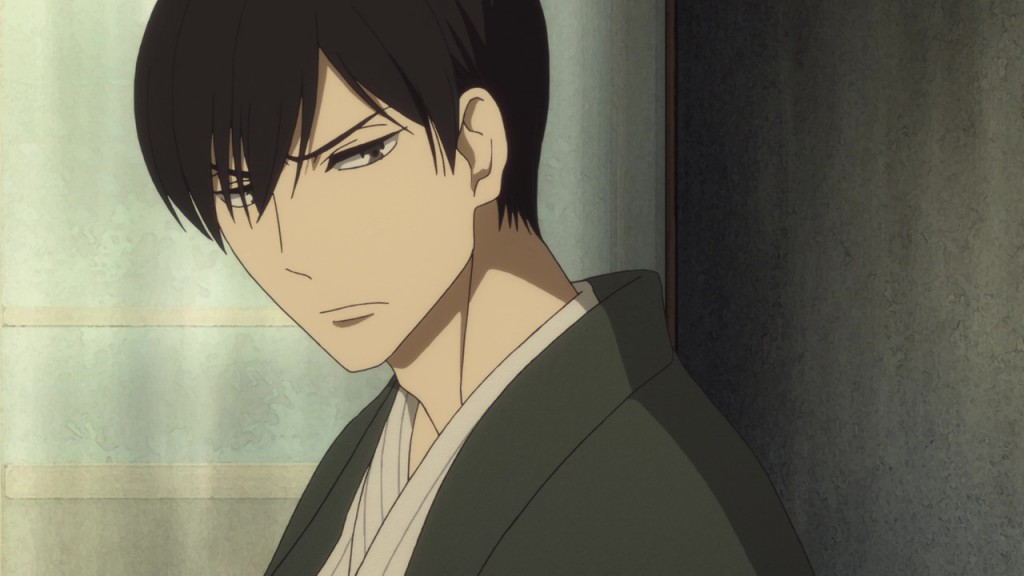 Do Osome’s part for me. You did it for the first time recently. The part where she picks Kinzo for her suicide pact, and tries to flatter him into going through with it.

This is referring to the tale of Shinagawa Shinju, or The Love Suicide at Shinagawa. In this story, the prostitute Osome decides to end her life in form of a staged love suicide, convincing her patron, Kinzo, to die alongside her. Osome, who wants to die because of financial problems, is not in love with Kinzo and only interested in creating a romantic legacy through her death in fear of dying gracelessly. When Kinzo has second thoughts, Osome pushes him into the water of the Shinagawa river they decided to drown themselves in. Just when she is about to follow him, a wealthy patron arrives on the scene, causing Osome to walk away and leave Kinzo in the river, which turns out to be too shallow to die in, anyway. What would be a humorous, ironic take on the tragic and romantic lover suicide genre turned into something rather different when a real double suicide case which occurred in Shinagawa in 1903 not only showed great similarities to the rakugo’s setting and story, but was suspected to be a suicide-homicide rather than a double suicide. 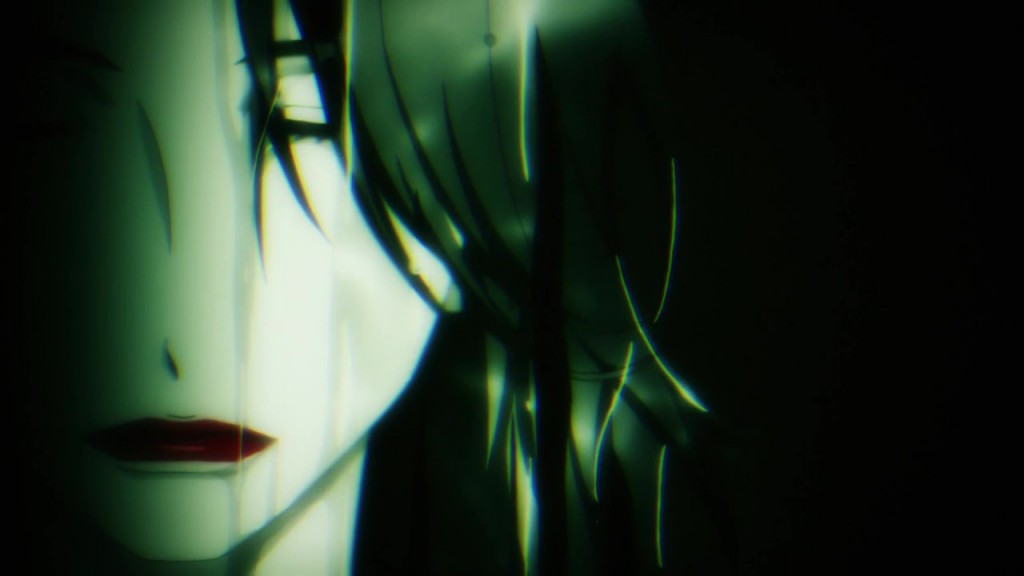 Considering all the water imagery in the OP, Konatsu’s suspicion of her father’s death not being accidental, and Miyokichi not wanting Yakumo 7th to know about her and Bon, I’m already very, very scared for the bound to be tragic ending to the lives of all of these characters.

At the risk of repeating myself, this is a wonderful series which trusts in the emotional intelligence of its audience without ever becoming arrogant about its own merits.