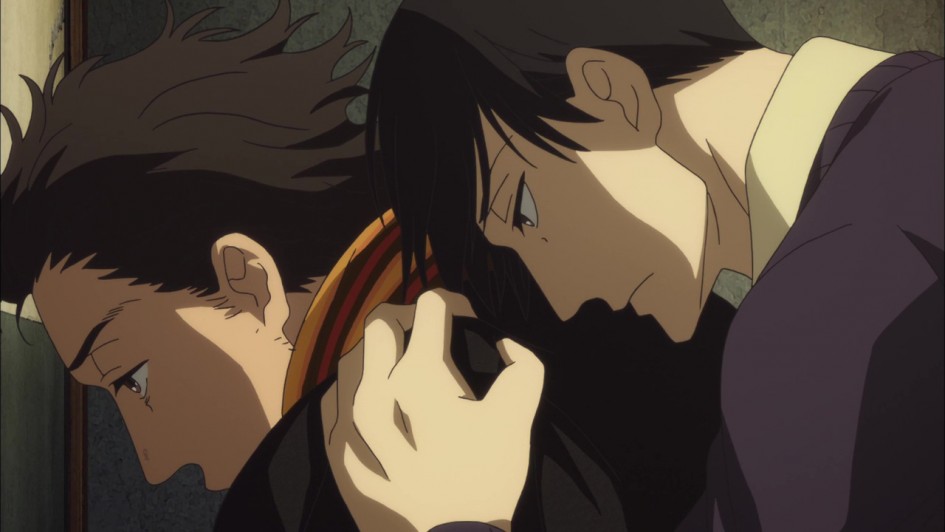 From the first episode, Showa Genroku Rakugo Shinju has been a strong show in terms of narrative, characterization, sound design, and visual storytelling. This week, it proved itself to be among the best Studio Deen has ever produced, right up there with Rurouni Kenshin: Trust & Betrayal. And those are some big shoes to fill. 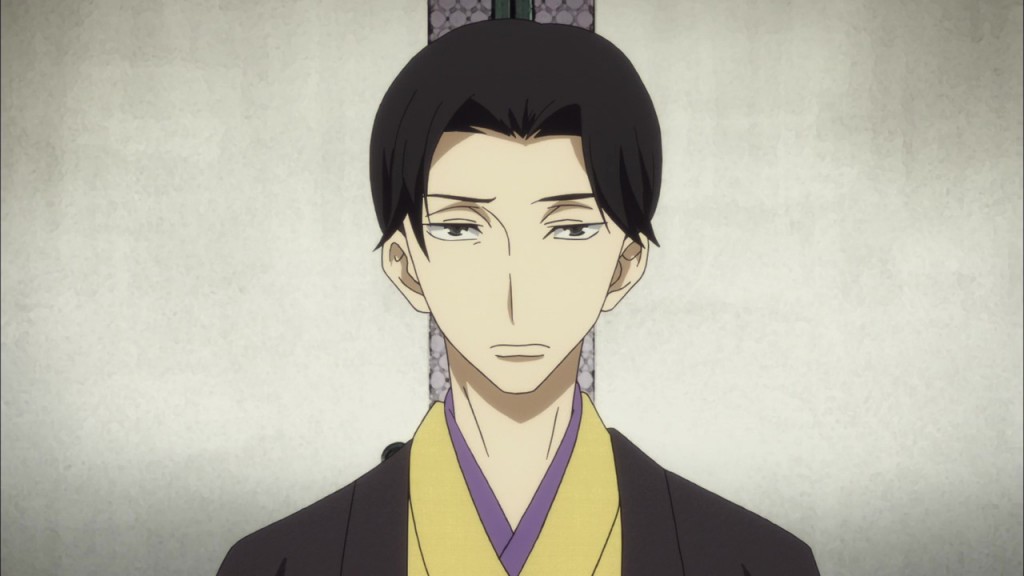 I will not talk to those who do not understand performance.

After eight episodes of careful build-up, time has come to cash in on all the little fires subtly fanned beneath the surface. Drama has arrived with a capital D and an execution so theatrical that even without the narrative flashback frame there could be no doubt about the impending tragedy. Rakugo‘s staginess might feel forced or campy in a different setting, but for a story about truth and identity on stage, it’s a brilliant choice. 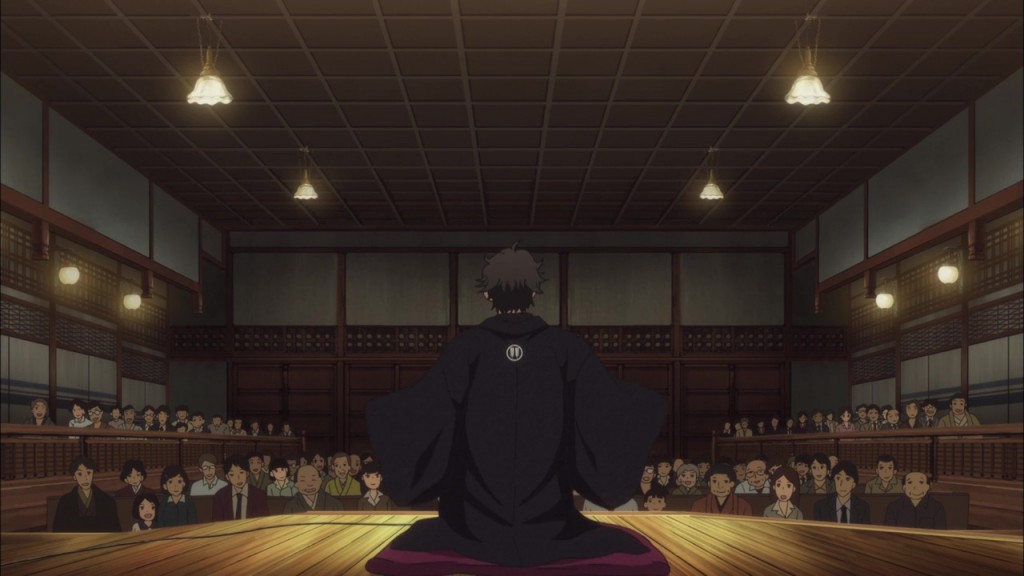 The series has always used the stage as a safe space for exploring its characters’ inner lives. We’ve learned as much about their motivations, dreams and fears through their performances as we learned from their interactions off-stage. 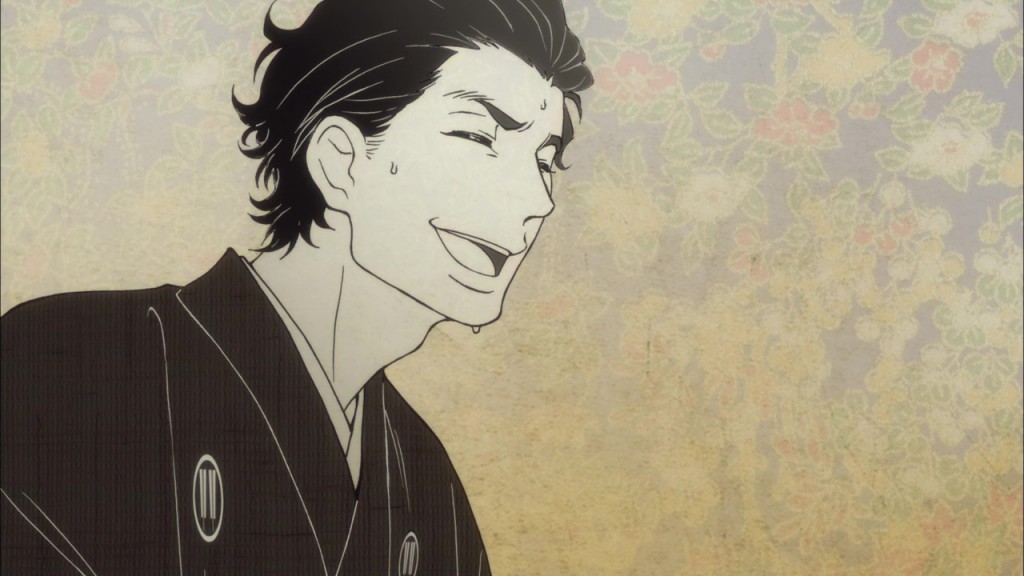 Please, just watch his rakugo! It shows you the kind of person he…

The past weeks were about Kiku’s liberation through the stage and discovering a truth in his performance, unable to shine in a life defined by society’s restrictions and his own fears. It’s only logical to bring the stage back into real life, at least as far as the visual storytelling is concerned. We’re reaching the story’s finale, and Rakugo starts hauling out the slightly bigger guns – while maintaining all of its grace. 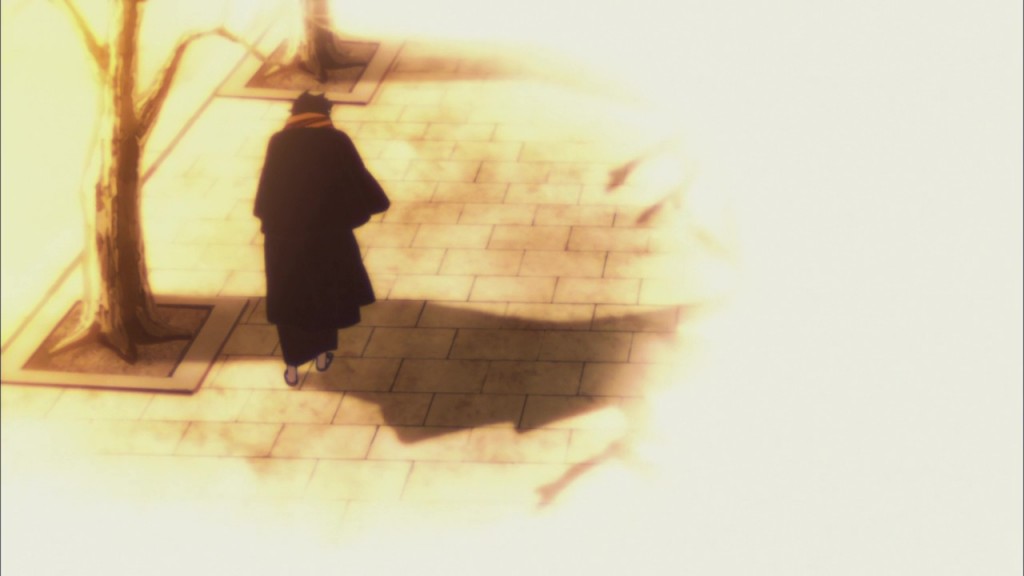 Just how far can he go?

Kiku and Miyokichi’s break-up was overdue, but it’s still painful to watch. Miyokichi has long accepted her days on earth to be joyless and herself unable to take charge. Waiting for life to pass her by, she has settled to be a spectator at her own tragedy. And so she sits at her window, waiting for Kiku to come by, eager to see him, but well aware he will only come to end their relationship. 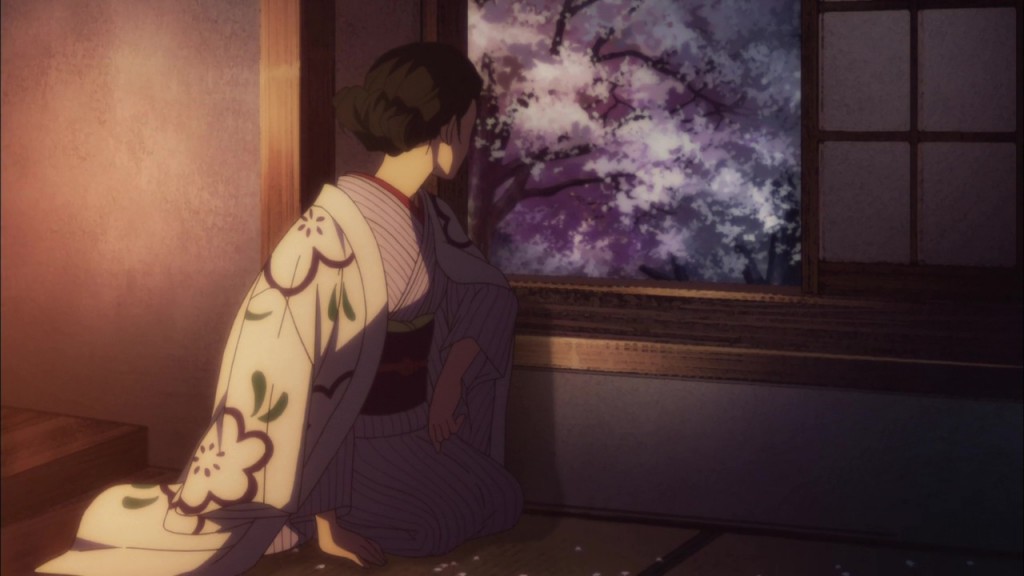 Miyokichi knows all good things must end eventually, and she has no intention to fight back. The show doesn’t have to give her any lines to spell this out. Seeing her sitting amidst the fallen petals speaks volumes. Beauty is transient, and just like the sakura, Miyokichi’s youth and happiness have already begun to wither. Why should she try to defy the laws of this world? 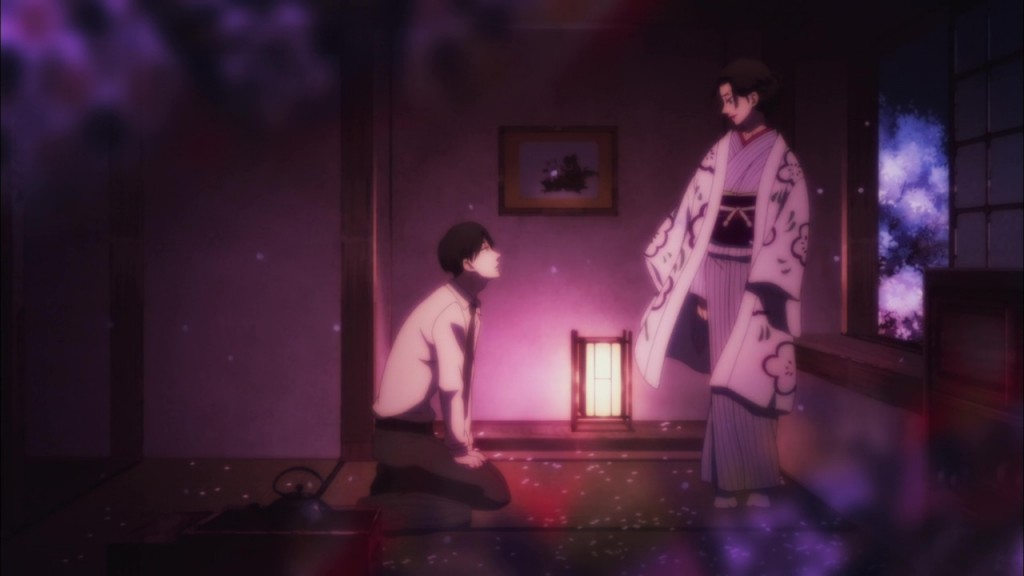 Her time with Kiku and the illusion of a shared future were as fleeting as the cherry blossoms, and just when both of them realize they never really shared their true selves with one another, the petals are swept away by a gust of wind. After her last, desperate attempt at provoking Kiku into caring about her, Miyokichi dramatically announces her revenge through dying and haunting him in what looks like a reference to Yotsuya Kaidan‘s Oiwa. 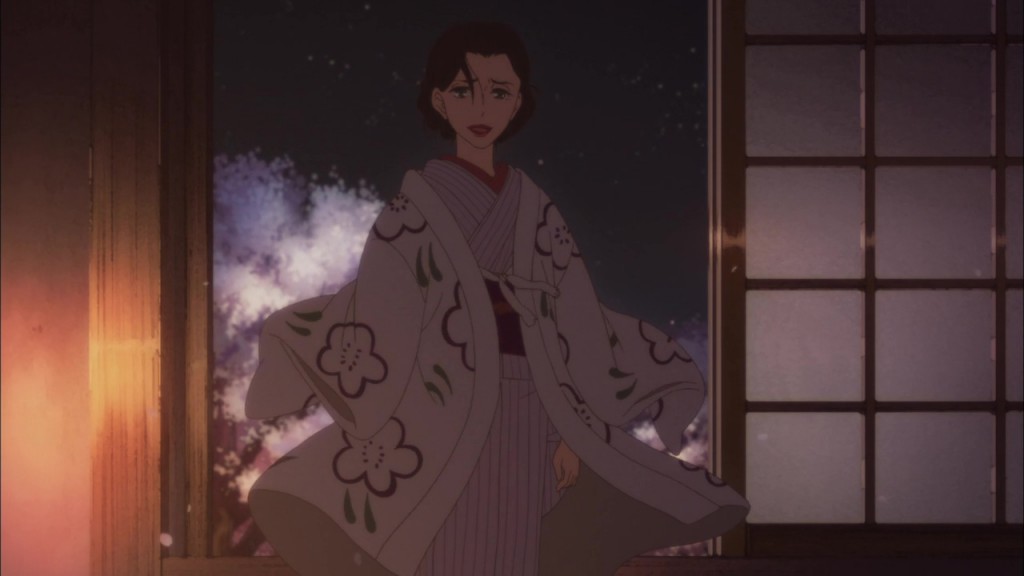 The next time I see you will be in Hell.

Miyokichi isn’t the only one being abandoned this episode. After their promotion to shin’uchi, Sukeroku takes his provocations and unwillingness to fit in a tad too far, leading to a heated dispute with Yakumo and Sukeroku’s eventual expulsion. 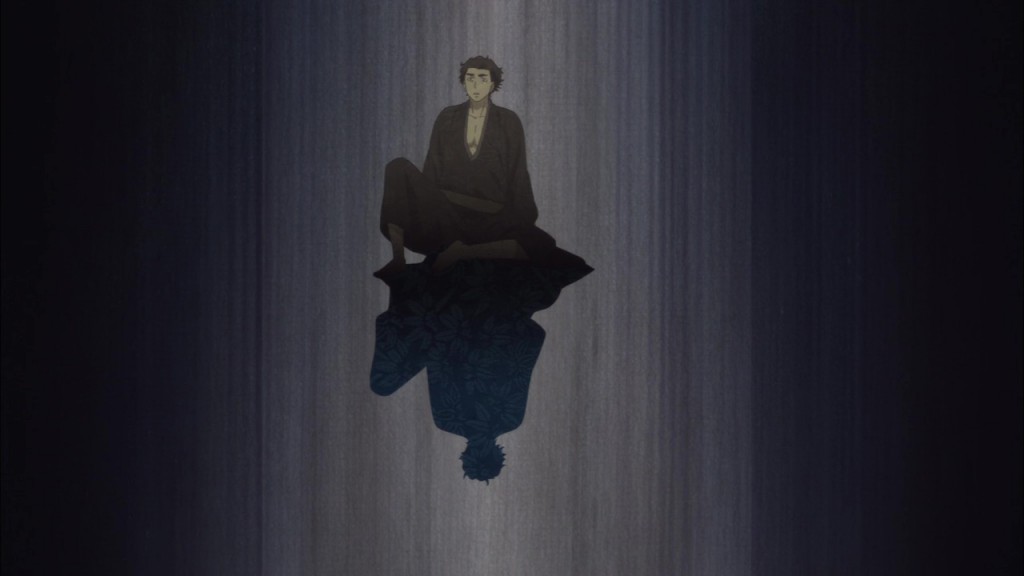 Until now, Sukeroku has been the rebellious hero of the story. Always striving to be free, full of energy, and radiating with confidence, the larger-than-life Sukeroku is now reduced to watching Kiku perform in secret, hiding in dark corners, pushed to the edge of the screen he once dominated. 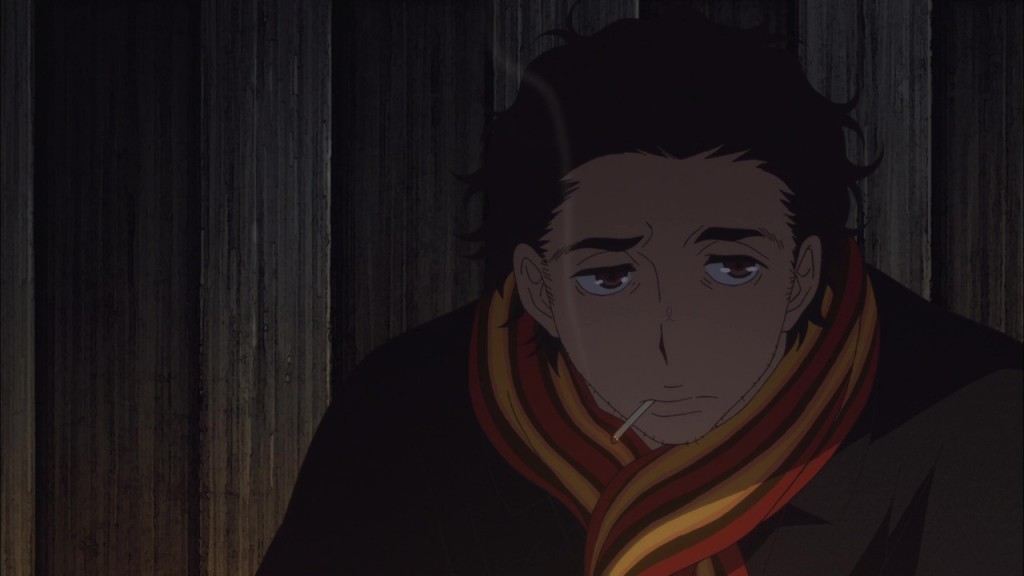 Knowing he will never inherit the Yakumo name, Sukeroku finds comfort in Miyokichi’s arms, two empty people trying to heal the wounds life left them with. 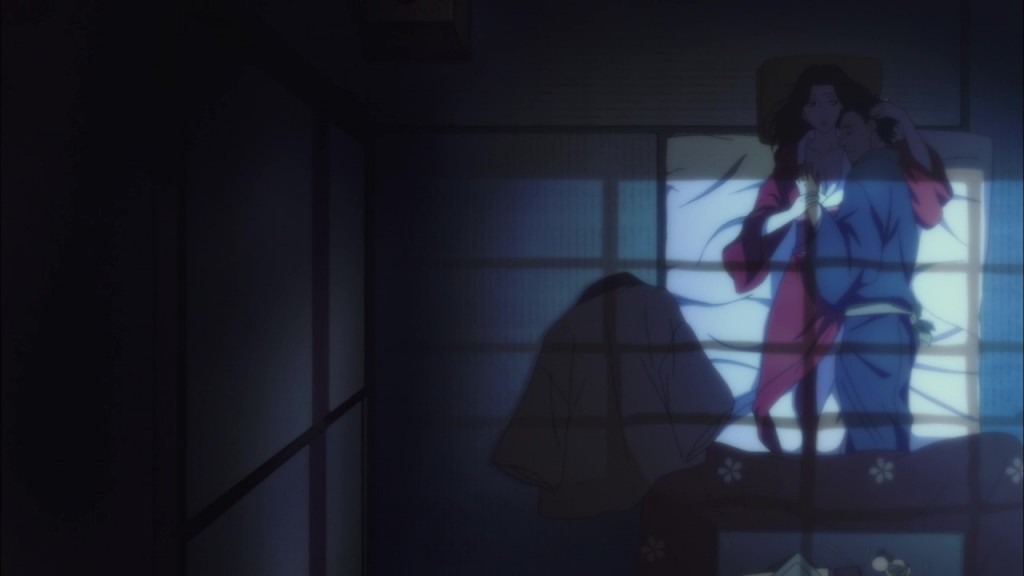 The time for dreaming big is over. It’s Kiku who cannot accept this.

Kiku has come a long way. The terrified boy who couldn’t allow himself to be passionate about anything has grown into a respected artist, able to express himself on stage with confidence. While he’s still somewhat of a sharp-tongued grouch, he clearly burns for his art – in his own, reserved way. Kiku might have been able come so far only by choosing adaptation and repression over emotional freedom, but he has found a space where he can be himself, and has learned to tolerate the spaces where he can’t. But there has always been one constant in his life: feeling inferior towards Sukeroku. After Sukeroku’s fall from grace, Kiku stays loyal, defending him when others badmouth his talent and trying to mend the broken relationship between master and student. 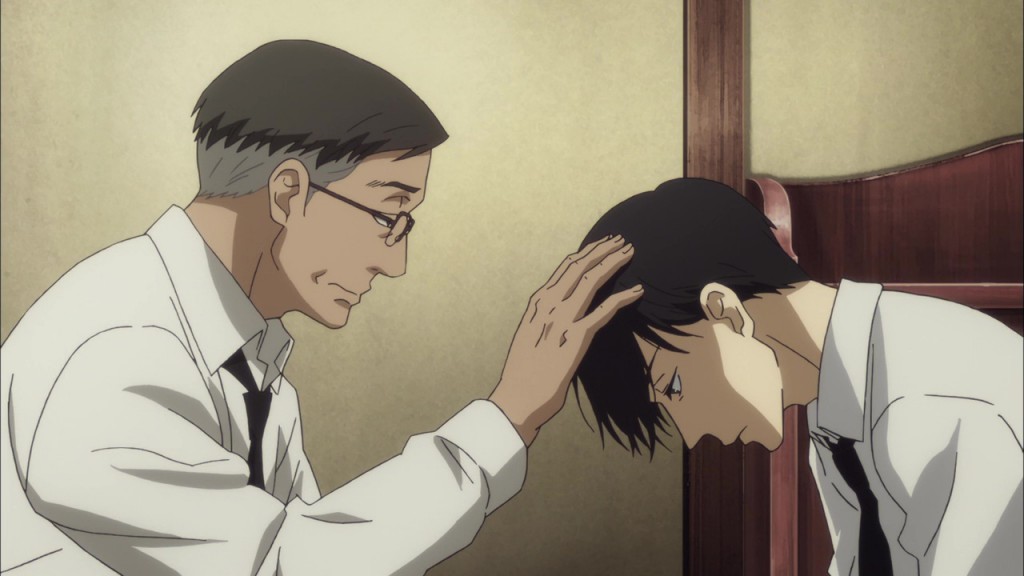 Firmly holding on to the belief that time will eventually heal everything, Kiku is shocked and devastated when he has to realize that Sukeroku will not be able to realize his dream, just as he is unable to admit to himself that he has already surpassed his friend.

It was Sukeroku’s rakugo that brought back Kiku’s smile after everything seemed dark, and it was his envy of Sukeroku’s passion and talent, which prompted him to strive for his own rakugo. Kiku doesn’t care about Sukeroku being with Miyokichi, but when Sukeroku comes to say goodbye to him and rakugo, Kiku cannot bare it. 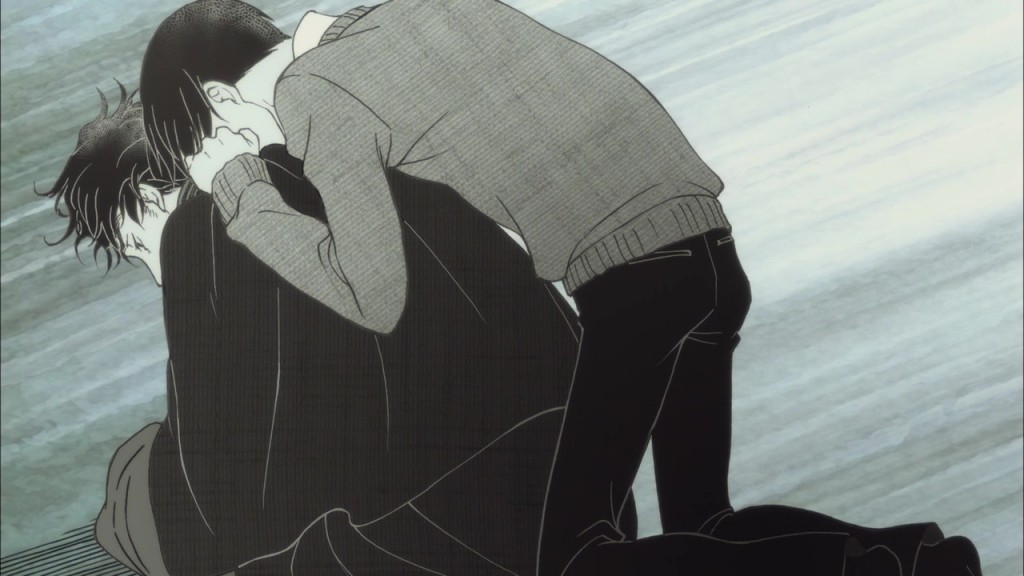 Do whatever you want. Just don’t give up on rakugo.

Rakugo has long become symbolic of both the freedom and repression it represents for the show’s characters. In a heavily regulated society, Sukeroku wished for its modernization to keep up with the changing trends and not fade away, which ultimately put an end to his career. Yet it was also the greatest source of joy in his life, and when that is taken away from him, he can admit to something he would never have confessed to before.

I always envied you. You were loved and pampered… The master did everything for you… I was just a stray dog he took in! Not an apprentice like you!

Sukeroku, with all his claims of freedom and devil-may-care attitude, longed for acceptance and acknowledgement just like Kiku. And so he falls from the pedestal Kiku had placed him on, with Kiku trying to grasp his lost ideal just like Sukeroku tried to cling on to his master when he was expelled. 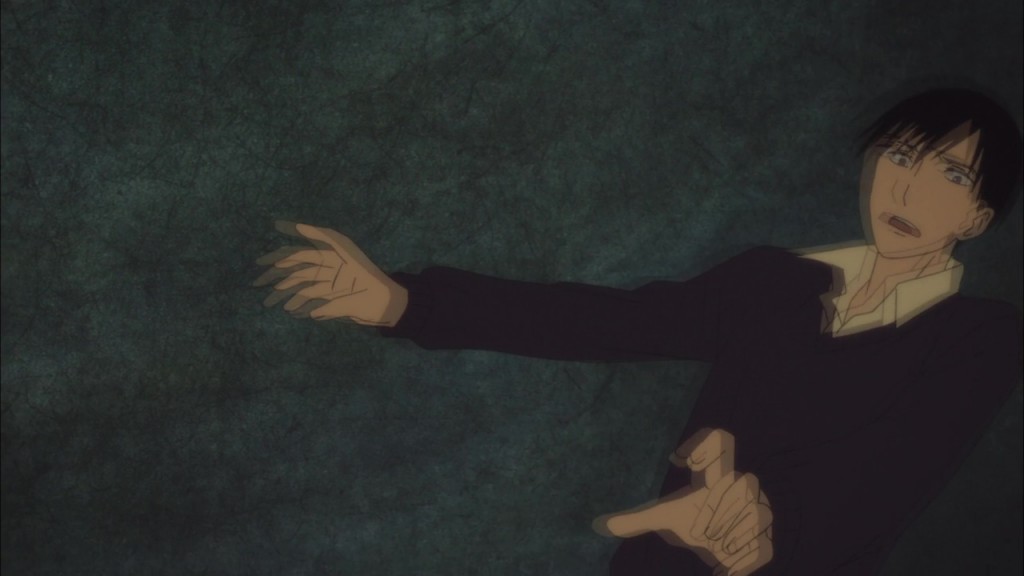 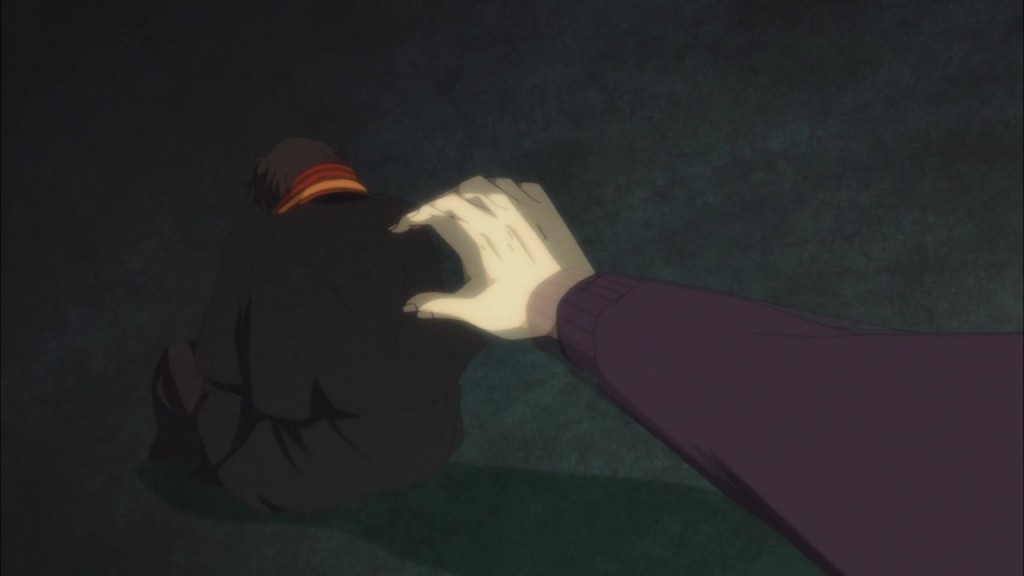 I had always looked at his back in aspiration… Now I wanted to kick it, cling to it, pound on his shoulders… With that indescribable frenzy of feelings inside me, I gazed at it…

That indescribable feeling, Kiku-san, is called love, and we all strive for and hurt from it.

Sukeroku, who professes independence and is too proud to apologize for his transgressions, Miyokichi, who tries to be anything a man wants her to be in order to avoid developing dreams of her own, and Kiku, enchanting the audience with stories of love, lust, and desire while denying himself the very emotions he’s trying to convince other people of. 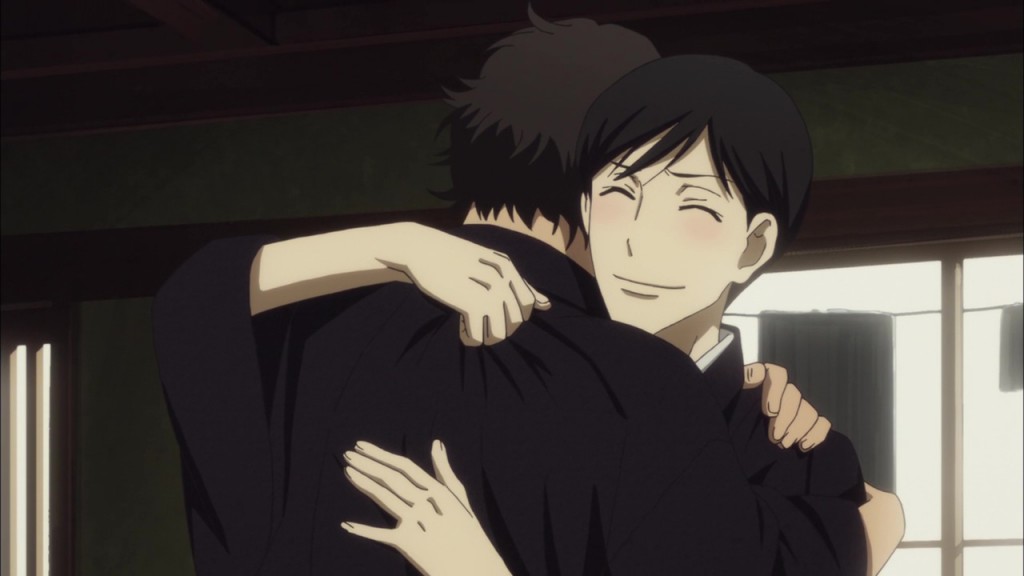 With cherry blossoms falling, characters being entrapped behind window bars or pushed to the side of a screen dominated by empty spaces while black abysses open up below, the visual storytelling in Rakugo is more powerful than ever. 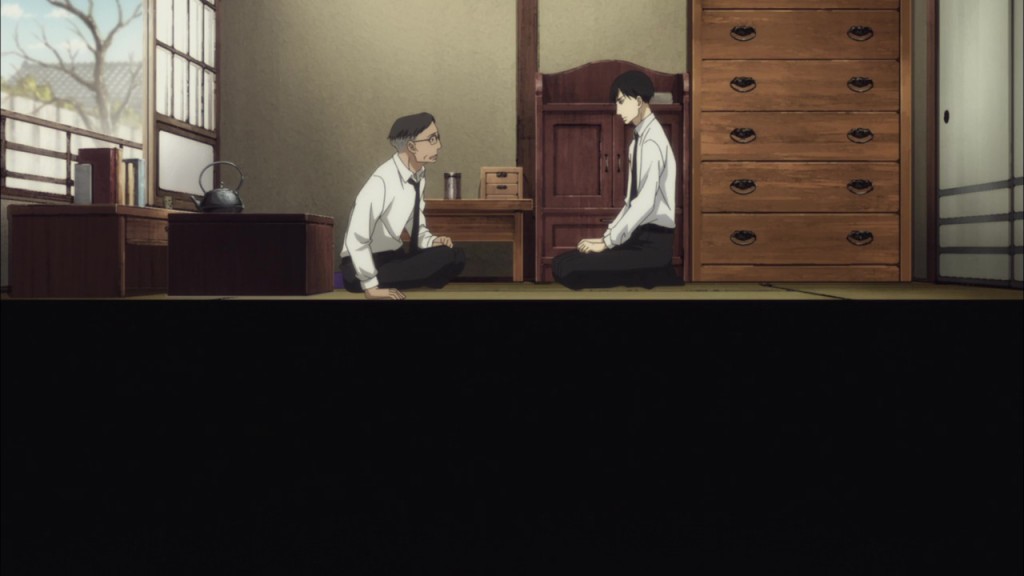 The looming tragedy is enforced by frequent intercuts to the river Miyokichi and Sukeroku met at last episode and meet again this week, underscored by the just all so slightly too audible sound of gurgling water or Sukeroku’s heavy step. 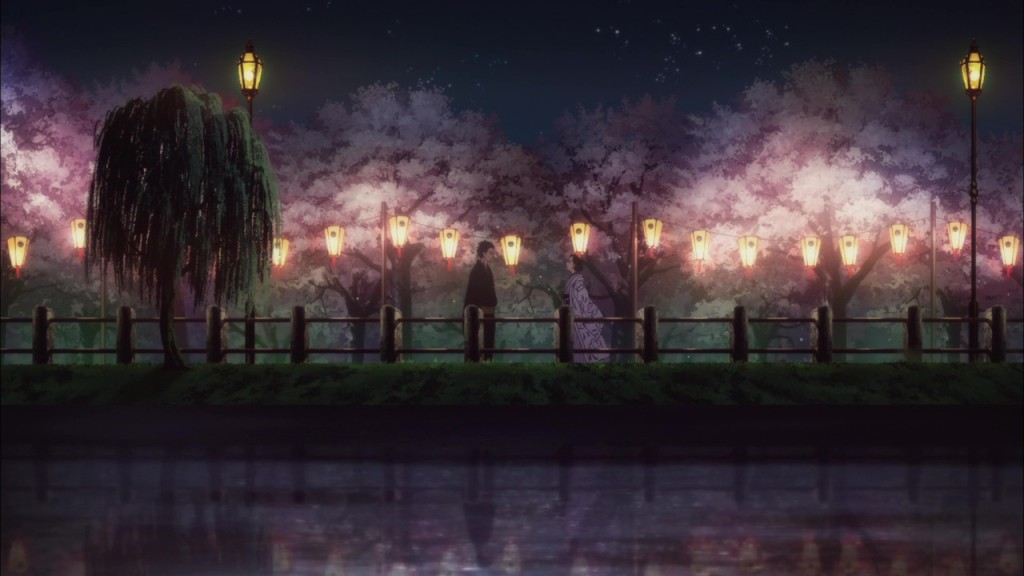 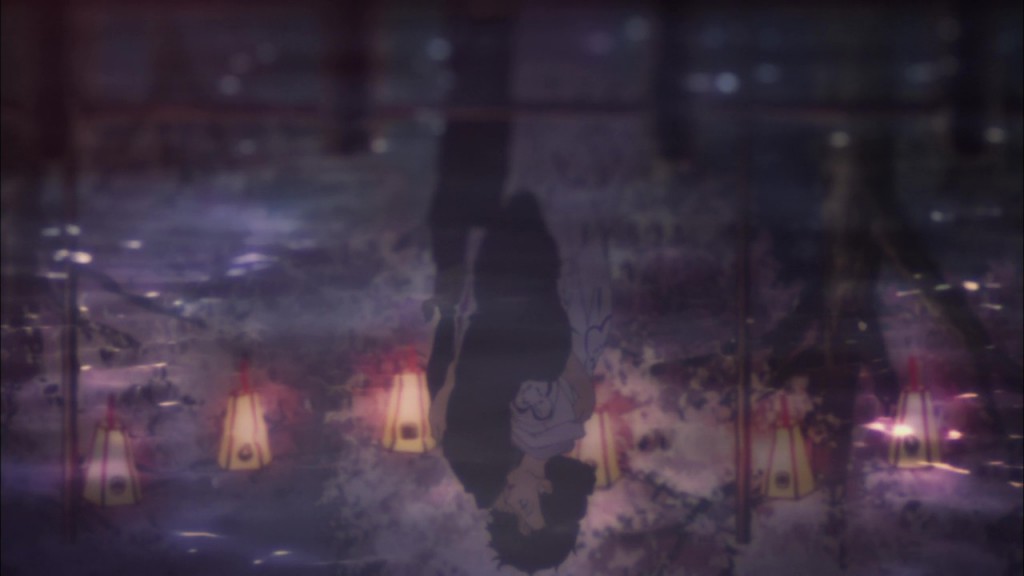 When the camera cuts from their kiss to a goldfish gasping for air, I feel like I’m choking while, at the same time, wanting to applaud the perfect execution of this episode. 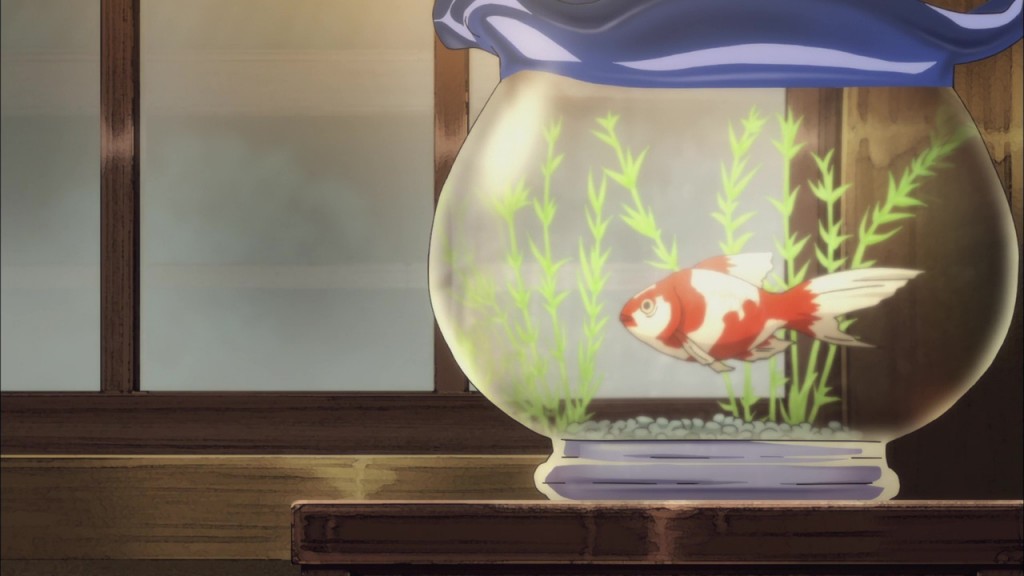